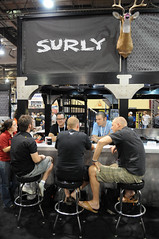 Have a seat at the Surly booth.
(Photos © J. Maus)

Surly Bikes has made a solid name for themselves over the years by offering well-built, versatile, and affordable steel bikes. You can hardly ride for five minutes in Portland without seeing one. I took a tour around their booth today with employee Emily Richard to find out what’s new.

The big news from Surly is their new Trailer (capitalized because that’s actually the model name). The Trailer is a bare-bones, heavy duty chunk of steel that’s rated to carry 300 pounds. Check it out…


The Trailer is available in short and long bed versions that retail for $750 and $775 respectively. The 16-inch wheels keep your cargo’s center of gravity low and a steel roll bar over them keeps them out of harm’s way. The hitch system (see below) uses a proprietary axle skewer or thread-on axle nuts and it fits a wide variety of bikes. You can adjust the trailer hitch to the level of the bed, so your load always stays level. 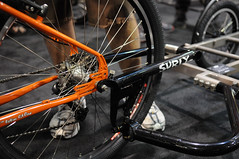 In other news, Surly has added S&S Couplers to their popular Long Haul Trucker model (frameset retails for $999), so you can now break it down and travel with it if that’s your cup of tea. Surly also unveiled their new Troll frameset. Emily said it’s got the same geometry as their 1X1 model (a 26-inch mountain bike frame) but it’s got a different rear end that’s full of possibilities. “It’s the Swiss Army Knife bike” is how Emily put it. The Troll looks to be extremely versatile. It can be built up as a capable mountain bike or an urban singlespeeder. 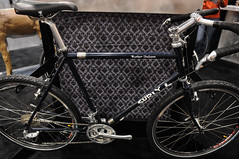 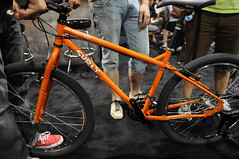 Surly’s Big Dummy longtail gets a bit of a makeover for 2011. It’s got a new, plastic snap-deck and it no longer has a sloping top tube. Emily said they’ve given the Big Dummy a straight top tube and a seat-tube gusset to improve stiffness. They’ve also downgraded the components and now only offer it in black in order to reach a lower price point. A Big Dummy frameset now runs $950 and a complete bike can be had for $1,850.

One of the most popular bikes in Portland, the Cross Check, remains the same for 2011. The only changes are a new color option (robin’s egg blue) and a mid-fork braze-on. The Cross Check retails for $1,099. 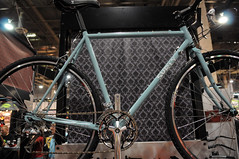 I bought a Surly Cross Check frame at Northwest Bikes back in 2002..or 03 and had it built with basic 105’s. I commuted with it, rode it 2 1/2 seasons of cross…and I am well over 200 lbs, lent it out for one whole cross season to a friend of mine, lent it out to 3 other’s for a single races after that, just to get them to try cross and lent it to others to ride…just to ride. After 7 years of this abuse, I finally had all the components replaced. The frame and fork are still perfect!! Obviously, Surly knows how to build a frame!!

Now If they just made a Low-rider rack to take advantage of those mid fork braze on’s.

they go all the way thru and offer a third (and way stronger) method to mount.

early 80’s trek’s had factory forks like these,and Blackburn made a superb low-rider rack for them. no longer made, and not available in 10mm (or 3/8)now.

I’m fairly certain that is the price for the complete bike. Framesets run ~$450 from Surly (depending on the frame). All in all, a fine deal says me.

$750 for a trailer?! sweetbabyjesus! Guess I’ll stick with my ol’ bob trailer…

The troll looks like the dream bike I’ve been waiting for Surly to make… if only it came in a 29er version.

couple of other things i liked about the Troll are the threaded holes for mounting the Trailer attachment nuts and the Rohloff friendliness. if one were to add S&S couplers, you would have a good alt to the Thorn Nomad. the disc caliper mounts on the chain stay are also a nice touch.

@Nick, #6: aside from the trailer holes and disc mount, the karate monkey pretty much is the 29er version of this bike, ay?

aljee, the Karate Monkey’s fender/cargo rack mounting braze-ons are a bit minimal. It clearly wasn’t intended to be fully outfitted in that way, whereas the Troll is.

Nick, i see your point there.
i am sure you have seen the Fargo, ay? the new Ti version has started burrowing it’s way into my ‘dark place’. i won’t be able to afford it till my knees are blowed out, i am afraid.

Tell me that wasn’t a real deers face mounted on the wall.

Ditto #7 on my K Monkey. There was some creative bending on the fender stays up front and the horizontal drops on the back confound me with a disk brake: maybe I have it setup wrong but I don’t feel like I should have to remove a disk brake caliper bolt just to remove the rear wheel.
Otherwise I love it for commuting.

#9
That “deer” looks awful symmetrical. Like injection molding.
Also, the color in the mouth doesn’t quite look natural.
Plus I imagine there is some extra interstae commerce laws regarding the transport of formerly living creatures.
Finally, this is Vegas: it’s all about fake.

Dang, no disc mounts added for Cross-Check and LHT.

aljee, I wasn’t aware of the Fargo. Now I have something new to dream about.

I always get amused by the traction these bikes have among the hipster community, especially given the fact that they are made overseas and are owned by the largest supply company in the industry (QBP).

I’d say buy a Soma, but they are no longer made in the states either.

WOBG, I’m betting that’d be too close for comfort to Salsa’s Vaya or Fargo (owned by QBP just like Surly).

@middle of the road guy – so what should we buy? any positive suggestions?
or are you just out to be a negative nellie?

+5 on #16
Props to Ahearne and all the othe highly skilled builders in Portland: awards they’ve won were greatly deserved.
I, however, don’t have have the money or desire to spend my hard earned $$$ on art. My bike needs to survive extreme day-to-day conditons.
That qualification ususaly relegates me to small builders for whom each frame is a sculptural billboard.
Show me a local builder who is making functional ugly frames like Surly.

I’m happy on my Indy Fab.

but here is an exhaustive list of domestic frame builders.

If I were buying off the shelf steel frame, I would look at a Gunnar or a Serotta. Or a used custom.

Jonathan "J.R" Reed
Reply to  middle of the road guy

That is a partial list. There are 35 in Portland alone listed on this site’s sidebar.