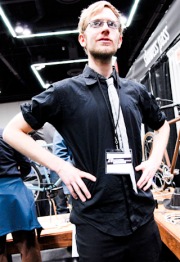 It’s with great excitement that I introduce our latest project here at BikePortland, a new column we call Bike Science with Shawn Small.

Shawn is the man and the mind behind Portland-based carbon fiber research lab and manufacturing company Ruckus Components (a business we profiled last year). He’s smart, he’s passionate about bikes, and he’s a mad scientist (I mean that in the best way possible) — all of which make him perfect for the job!

Shawn hails from Wisconsin farm country, where he says he learned to fabricate tools and machines ever since he was “old enough to milk a cow, which is real young.” He’s built just about everything you can think of — from robots to wind turbines, rockets to hovercrafts (yes, hovercrafts). After earning a Mechanical Engineering degree from the University of Wisconsin and working several engineering jobs, he moved to Portland in 2008 to start Ruckus.

Think of Bike Science as a mix between Mythbusters and the informational brilliance of Sheldon Brown (may he rest in peace).

Shawn’s articles will investigate and demystify the science behind bikes, components, and accessories. He’ll tackle the truth behind product claims (is that jacket really waterproof?), he’ll delve into physics (how far can you lean before slipping out in the rain?), and he’ll break down the jargon (know the difference watts, joules, lux, lumens, and candela?).

If you have a question or a topic you think Mr. Bike Science should tackle. Drop us a line and we’ll send it to the lab for analysis. Stay tuned for the first article next week!

Love it! Can’t wait to read it and I’ll be dreaming up questions to ask.

This is right up my alley.

Wow, brilliant idea for a column!

steel is real, carbon fibre is BS. How about an ‘expert’ that knows something about the bikes the other 99% of us ride?

Shawn is a carbon guru, but who says that’s all he knows about? relax. He knows plenty about steel and other materials. dude’s a mad scientist for cryin’ out loud… He’s like Doc from Back to the Future but instead of time travel and Deloreans he obsesses about pedal power and bikes. one of our story ideas is to debunk all the bike frame material myths and do a series on each one of them to discuss pros/cons/myths, etc..

* Efficiency and adjustment — if your seat post is too low, how much power do you lose? If you ride flatfooted on your pedals?

what is a skinny jean wearing hipster’s coefficient of drag?

How much power, in watts and percent, do you lose to a dirty chain over a clean one?

I rode with Shawn yesterday in Forest Park. I learned more about carbon fiber than I ever thought I wanted to know.

Steel was real. Carbon is it now.

Red five- what if he is carrying a coconut in his pants and a sallow in his teeth?

I will tell you what steel is… its heavy.

I wanna see what happens when he sticks his foot in the perennial chain maintenance jihad.

Hopefully he will be culling the forums for worthwhile topics to front paged but offering assistance regardless.

This is an excellent idea for a continuing column. I look forward to learning more about bike science from Doctor Carbon!

Its terrific to learn that there is a local carbon repair shop!

I want to hear more about nanotube carbon and ceramic-metal composites.

Chain maintenance? Simple, I rotate three chains on a cassette – pull chain after about two weeks and drop it in a coffee can to soak in mineral spirits – install clean chain and lube w/ DuMonde Tech (stinky, messy, expensive – what more can you ask for) – a couple days or so later, scrub the soaking chain by hand with a toothbrush (rollers and sideplates, turn over, rollers and sideplates) – dump dirty solvent to settle and wipe out coffee can – put cleaner solvent into coffee can and rinse chain – hang to dry – meanwhile, re-lube installed chain as needed in case of rain or whatever – voila! 🙂

(Oh, and my question [already submitted] – the even bigger jihad – helmet efficacy 🙂

It’s not about power (chain cleaning). The thing is, you can’t re-lube a dirty chain without carrying more grit into the moving parts, and the more grit and gunk wears sprockets faster, gunks up derailer pulleys (which impedes smooth shifting), etc.

Not to mention, if you don’t grok the sheer joy of a clean drivetrain, well… 😉

Yo, Mr. Genius, got a question: Should ya lean into a turn or away, while pullin’ as many G’s as possible to drop da pack?

Nice to see a fellow University of Wisconsin-Madison engineer putting their knowledge to a great use! I look forward to the column.

this is a wonderful idea for column! Now we can see the relationships of different materials with work hardening, tensile strength etc.

BURR whiny pessimism might feel good in web forums but it will get you nowhere in life, didn’t you see conans farewell episode?

Thanks for the well wishes and positive thoughts, there are lots of fun ideas/topics to be covered!

Bicycles and engineering are my passions in life and I love sharing my (over)excitement about them!

What about Al or Ti? Bamboo?

That is a kick ass pic, btw Aaron and I can’t wait to read what you have to say.

Yes, I do know the difference among joules, watts, lumen, lux. candela.

More to the point, does this dude know why fixies generate 1/3rd more torque and power with every crank stroke than a bike with a freewheel does?

It is not exactly rocket science (I have made a living at that too), but rather 19th century mechanical engineering: Hamiltonian physics, hodographs, gyrators, and the like. Read the books.

Modern “bicycle science” is 95% rubbish. There is a book about that too.

Carbon fiber is fabulous if one can stand two fractured frames a month, or a stress-risered seat-post up one’s behind. Think about the basic properties of the material, especially the anisotropic nature of its Poisson’s ratio.

This is a silly myth. The only difference is due to the length of the chain and the derailleur. Its a negligible effect.

what in the world do gyrators have to do with bicycles? I’d really like to hear how a fixie generates 1/3 more power and torque than a bike with a freewheel. Maybe Pons and Fleischmann have a paper on that topic. Carbon fiber and the like is the future of bicycles and all high performance products. The only thing that is “real” about steel is that it is real old. When Boeing and Airbus announce that their new jet is 50% steel and only 10% carbon fiber then you will know that steel is back. Until then steel will be relegated to boutique custom bicycles and department store bikes neither of which have anywhere near the strength to weight ratio of carbon fiber construction.

C’mon – please? Just get it out of the way: Do helmets work?

Am looking forward to Mr Smalls comments and viewpoints. I work with steel, but feel that carbon has been improving a lot and will have an even bigger role with bikes in the future.

I have a few and they deal with weight and frames.

At what weight should the larger cyclist start looking at HD frames (say a Worksman, or similar.)

I try to get everyone I know on bikes, and some of those folks are not tiny people. I would love to be able to tell them the facts on size and biking.

Shawn is a straight shooter who rides carbon, steel, and aluminum bikes. I’ve seen him putting them to the test at races and on the worst days of winter commuting.

I’d love to see an investigation into frame/drivetrain stiffness vs. efficiency. Are power tap cranks and hubs precise enough to compare input power at the cranks to output power at the rear hub? If they are, you could compare peak power and total work for different setups. Shed some light on flex = energy loss.

I want to know more about the anisotropic nature of its Poisson’s ratio.

One compelling question being largely ignored by the industry at large and your typical “green” cyclist is: Who recycles carbon fiber? Answer: With the exception of repair, there is no afterlife for carbon frame-sets and components.

aaronf, I’d like to know more about it too. Sounds interesting.

Make it snarky like Dr. Know in wweek and you have a winner.

I’d like to thank all of the people who have pointed out that Ruckus MD is into carbon fibers, which some folks clearly do not want. Why wait for the first column to begin criticism? Exactly!

I will be wary of any advice he gives about carbon fiber now! If/when he gives some…

I predict we will all learn something about bike science and he will learn a great deal about careful word selection when answering a question with vague declarative statements about “what is the best/superior”.

Hopefully he also includes direct links to scientific literature that backs up what he is saying and not links so some else’s loud opinion.

Any information offered in a scientific context needs to have credentials and 3rd party reference backing it up or it’s no better than talking heads on FOX news commenting on climate change.

It gets talked about all the time, and yet I’ve never heard of anyone measuring anything with respect to stiffness.

Of course carbon fiber has a variable Poisson’s ratio – that is what makes it anisotropic. It is the high modulus of elasticity that makes it tempting to use in bicycles.

I am curious about the effect of heat tube angle and fork offset on stability.

Awesom Shawn! You are a brave man!

As I recall, a Shimano study found that dry vs lubed vs dirty made virtually no difference in eficiency, nor did cross-chaining or wear. But using larger sprockets and slower spinning gave a tiny increase in efficiency. I think I have the study around, but I don’t have a link to it.

Actually, the industry at large is beginning to think about this. Viable recycling technology will likely come from the aerospace industry as a lot of modern aircraft is built using literally tons of carbon and there need to be solutions once these planes are nearing retirement.

There is a lot of current research pertaining to Carbon Fiber Recycling, these folks are trying to lead the efforts –> http://www.recycledcarbonfibre.com/

Boeing has been working on a recycling plant in Arizona (from here –>
http://www.compositesworld.com/articles/carbon-fiber-life-beyond-the-landfill

There is also a lot of research pertaining to “green” resin systems. Currently the surfboard industry is the industry testing them. They have yet to be proven in higher performance applications yet.

I look forward to the column – I want to know about the science of various lubricants (wax, oil, dry) – What is the best chain lube for Portland’s climate?

Also, school us on the physics of helmets (as mentioned before) and how effective they might be in collisions with cars.

I soak my chain in motor oil and just let the excess run down my driveway into the street. My chain is so smooth and quiet!

If they could just harvest this carbon from the atmosphere, we’d have no more worries!