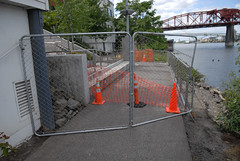 A portion of the Willamette Greenway Trail north of the Steel Bridge is closed to biking and walking due to an erosion problem that is causing the paved trail to crack and sink into the river. A handwritten, “Sidewalk closed – Use Naito” sign has been posted on a locked gate just north of the railroad tracks at the southern end of the closure.

According to Portland Parks spokesperson Beth Sorensen, that segment of trail is maintained by the McCormick Pier Condominium homeowners association, which took over maintenance responsibilities from the City of Portland in 2002.

The homeowners association is managed by Portland-based Community Management Incorporated. Lisa Campbell with CMI said via telephone yesterday that the problem “Is a major issue, not just a regular repair.” Campbell says engineers are currently looking into the situation and are assessing what needs to be done. She believes the cracking was caused by a combination of things. “We had a lot of rain this year and a high river. There also could have been a lot of drainage that moved the earth.”

Campbell says at this point she has no idea how long the trail will be closed. She plans to meet with the board of the McCormick Pier homeowners association on Monday and will be able to provide an update at that time.

I wondered whether our heavy rainfall might mean we’ll be seeing more of these types of problems with paved riverside trails. Back in February, Portland Parks and Recreation closed a portion of the Eastbank Esplanade when it began cracking and sinking.

Parks’ Sorensen says they don’t feel a trend is afoot, but that if movement of soils under paved trails does occur, the responsibility to repair it falls on the adjacent property owner. “It is a big river and most of the ‘soils’ along the banks are fill material, so it should be expected that managing movement and erosion of the banks to protect adjacent structures is part of the adjacent property owner’s responsibility.”

Thanks to the readers who informed me of this closure. I’ll update everyone once I hear more from CMI.

That sucks– hopefully they’ll have it more or less fixed so the Sole Support for Parkinson’s walk doesn’t have to change their route for their Sept 26 event!

thanks for letting us know!

“… Lisa Campbell with CMI said via telephone yesterday that the problem “Is a major issue, not just a regular repair.” …” maus/bikeportland

Also, it could be very expensive for the homeowners association to affect proper repair of the pavement that would keep the pavement from slipping away again in future. That might be the situation if it’s found that pilings are required to provide long term stability that’s cost effective.

I’m wondering if McCormick Pier designed and constructed the existing section of affected Greenway Trail pavement, or whether that was a city project.

you mean that gate is sometimes open?! I’ve been by there a couple times in the last month or so and it’s been closed every time… I’ll probably be going by there again tonight…

I used to ride that section pretty regularly when I lived nearby. It’s incredibly awkward to ride — very narrow in parts, and a really tight switchback level change that makes everyone put their foot down to keep from falling over. As for the gate, I believe that when the trail is not broken, it’s usually locked at night.

Which brings up two points:

1) How much longer are we to tolerate inadequate MUPs as a substitute for actual bike paths and separate walking paths?

2) How can such an important connection be the responsibility of a private property owner (or association), considering the different interests and motivations they may have versus public need?

Is this public property due to an easement? If so, and the trail is an important connection, why is there a gate that can ever be closed?

I’ve owned a condo at McCormick Pier for 5 years, and believe me, damage/erosion on the river side is something we homeowners are well aware of. If I recall correctly, the Army Corps of Engineers designed and built the riverfront portion of the property, and they come out every few years to inspect and make repairs to the pier. (I’m unsure if the Corps’ purview extends to the paved portion of the path, or if the HOA/landscapers take care of it, but I suspect we have to.)

We used to have a tower gazebo adjacent to the path in that exact area where the current erosion occurred. The gazebo collapsed in 2007, also due to erosion and a rotting support pillar. ALL improvements/replacements to the property have to be voted on by the entire HOA, and the HOA voted not to rebuild the gazebo. It’s frustrating to me, because the greenway path was a big reason why I like the neighborhood, and I want to see it maintained and improved over time.

BTW, the Willamette Greenway is a series of easements–although each segment is private property and is maintained by the property owner, the public has a perpetual right to enter the greenway property during daylight hours.

peejay…sadly it is a common tactic of our local governments to shift responsibility for construction and maintenance of pedestrian and bicycle facilities to the property owner adjoining the public right of way. When I worked for the City of Vancouver…I often wondered how long drivers would put up with lifted streets (1 foot high ‘to scale’), missing or closed sections, unshoveled snow/ ice, etc…like most pedestrians do on a daily basis.

…it would be interesting for a PSU student to look into the City Council records/ or transportation records for this time period to see if this public right of way was sold to the adjoining property owner (perhaps there was a vacation hearing on it) or if it was a historical easement that the city felt its budget could no longer maintain…even though it had a transportation purpose.

If the sidewalk is damaged to the point of a safety risk, isn’t the property owner required to report it to the city of Portland for proper inspection? Secondly, wouldn’t the city and not the homeowner association, have to be the ones that close down a public right-of-way? Lastly, why is there a gate on walkway to begin with?

Last time I went by the path, someone claiming to be part of the home owner’s association was telling people that the path was a “private walkway”. The guy said that the homeowners were getting sick of the noise and lack of privacy from people using the walkway. I figured the guy’s complaints was why the gate is closed on such random times.

Sure, maybe I am asking silly questions, but a hand written sign doesn’t strike me as an official or above-board action.

Found this in Chapter 14 of the City Code. Johns Landing and McCormick Pier Greenways have same rules.

A. For purposes of this Section, the term “public easements of the Willamette River Greenway” is defined to include the following areas:

1. The Willamette River Greenway easement property in the John’s Landing area, located on the west bank of the Willamette River between SW Hamilton and SW Dakota Streets, and specifically described in the June 17, 1974 Agreement between the City and the State, Macadam Investors Oregon, Ltd., and John & Condon Properties, accepted by the City pursuant to Ordinance No. 139425, and recorded September 19, 1980 in Book 1470, page 184, Multnomah County records.

2. The Willamette River Greenway Trail easement property in the McCormick Pier area, located on the west bank of the Willamette River between the Broadway and Steel bridges, and specifically described in the January 15, 1982 Agreement between the City and the Norcrest China Company, accepted by the City pursuant to Ordinance No. 152728, and recorded in Book 1574, page 1610, Multnomah County records.

B. It is unlawful on the public easements of the Willamette River Greenway to:

1. Operate or permit the use or operation of any device designed for sound production or reproduction, including, but not limited to, any radio, television set, musical instrument, phonograph, loudspeaker, bell, or chime;

C. The property owner(s) or an association thereof of the John’s Landing area and the McCormick Pier area shall be responsible for the erection and maintenance of appropriate signs at all public entrances to such easement property which specify the prohibitions of Subsection (b) of this Section.

That’s what I like about these semi-private trails — fewer people know about them and hence they’re less crowded and more peaceful with less of the bad elements.

Certainly a foolish place to invest your money, that close to a river that can run high. Hope they have really big pumps in those underground garages w generators to match

This seems like a good example as to why we need wider greenways and greenway trails that can accommodate bikes, pedestrians and environmental protection/restoration. The latter means a greenway wide enough to include viable riparian habitat and river channel functions that inevitably include some erosion and deposition over time. When it is fully complete, the 100’+ greenway at South Waterfront should set a new standard for a well-designed greenway that combines and integrates environmental and recreational values.

Has there been any talk of a two-way cycle track on the east side of Naito Parkway? It would have almost no vehicular crossings and would allow cyclists to avoid the slow, congested pedestrian-heavy Waterfront Park pathway.
Naito Parkway is overbuilt for the amount of traffic it has on it so there would be plenty of room.

Uh, they just rebuilt Naito, so what is there is probably going to stay for a while.

Try going out on Naito between about 4:30 and 6:30 to see if you think it is overbuilt. Sometimes it takes a car 5-6 signal phases to make it through one light – which is why I bicycle.