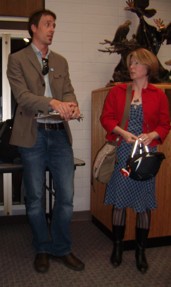 Vancouver City Council heard testimony regarding the proposed elimination of Vancouver’s Bike Program from more than twenty bike advocates from both sides of the river during last night’s city council meeting.

Although, the full public hearing and final vote on the draft Transportation Improvement Plan is not until June 21st, advocates seized the opportunity to express overwhelming support for the Bike Program during the general public comment portion of the meeting.

“This has been one of the most interesting [council] sessions… I feel refreshed rather than pummeled.”
Pat Campbell, City Council member

The presence of a BTA representative at the meeting may mark a change in their involvement in Vancouver. A welcomed change by many, including Leah Jackson, the facilitator and de facto leader of Bike Me! Vancouver (she also owns an art gallery on Main Street). “It was fabulous and much appreciated to have a BTA representative here,” Jackson said after the meeting.

Gerik Kransky, BTA Advocacy Campaign Manager, submitted a formal written request for the city to amend the draft TIP to include funding for the Bike Program. After the meeting, Kransky met with local bike advocates at the Brick House pub for an informal conversation regarding Vancouver bike matters. A spirit of constructive team-work flowed during the gathering with only minimal references to the long standing “unwanted step-child” status Vancouver has tentatively had with the BTA.

Bike Me! Vancouver member Seanette Corkil said the goal of their testimony at council was to strike a positive tone. “We wanted to go in [to the meeting] positive, forward thinking and highlighting the success of the bike program rather than be negative and alarmist.”

The positive comments did not go unnoticed by council members who collectively seemed to be at ease and open to the possibility of keeping the Bike Program. “This has been one of the most interesting [council] sessions… I feel refreshed rather than pummeled”, Councilman Pat Campbell stated as the public comment period wrapped up.

However, even Campbell was clear to point out that pragmatic financial challenges facing the City of Vancouver will require budget cuts. “If we get city checks bouncing than it’s not going to help the situation,” he stated.

Amendments to the draft TIP face an unwanted surprise. The previously announced $200,000 in uncommitted funds is not quite as available as previously disclosed. “In a sense it’s committed to cost overruns,” Councilman Jack Burkman stated during the meeting. It seems although the funds are not committed to any specific line item, they are being reserved as contingency in case cost over-runs occur elsewhere in the transportation plan.

Even so, city council is listening to community feedback, as noted by Councilwoman Jeanne Stewart. “The benefit of the testimony from those coming forward is learning the level of interest the community has [for the Bike Program].”

Thanks to a great turnout by the community, there remains hope to continue funding of Vancouver’s Bike Program. We’ll keep you posted.

— For more, see this article in The Columbian: Bicycling advocates lobby city for funding.

Where is the funding for the bike program going to come from? Its great that the city got a clear picture of how important biking is to the city, but money doesn’t grow on trees.

Van Bob..they were attempting to suggest that an unencumbered amount of money ($200k) could be identified for the bike programme. But these funds were being held in reserve it seems.

I would not give up on this $200k…before I left the city our construction projects were coming in way low in bids…I assume some of that may still be happening…though $200k is a sneeze on many larger capital projects…a damaged traffic signal, relocated driveway, etc.

Thanks for the details Todd. We are still very actively working to get the $200K for bikes.

Hopefully people who feel strongly about this issue will take the time to write a letter, postcard, or email to their Vancouver City Council Members between now and the final vote on June 21st.

This is our chance to have an impact. I for one am not willing to concede the point that the $200K is designated for anything. That money came by zeroing out Bike, Ped, and ADA. Any attempt to say that it is a done deal is a misnomer. We have two weeks.

Now is the time to push back and tell the city to find cost overrun funds somewhere else.

You all did a wonderful job last night – organized, articulate, positive, and even humorous. Thank you. That makes for a pleasant discussion.

No, it’s not over, but times are definitely tough. As I mentioned to city manager during the workshop, we’ve had a lot of bids come in lower than expected due to the economy, so I’m cautiously hopeful.

It was impressive to see all the local bike groups at the meeting. I can’t think of any other council meeting that had so much passion and was still very civil and respectful of the process.

Leah earns special gratitude for her on-going bike advocacy. She is by far the unsung hero of Vancouver’s bike movement.

I know Ken and Marcus took heat for convincing the organizers of the nude-rally to cancel the event. Retrospectively, it was a good idea. The playfulness (and yes, silliness)of nude bike riding would have been an unnecessary distraction. Good thing body paint has a long shelf life 🙂

yeah for Vancouver. The blog trolls on the Columbian are tearing this apart.

I dunno, there is something sort of charming hearing those banjos off in the distance across the river.

My experience in these situations is people will tell you things can’t be done and money can’t be found until they’re under enough pressure to figure out a way to do it.

As far as writing off Vancouver, they’re bigger (164,000) than all Oregon cities besides Portland, and a key part of the region’s future.

Actually I am curious as to how the City can ‘zero’ out the ADA programme given federal law.

There is not much more in a city’ transportation programme that is required by state or federal law than that. Depending of the level of customer service (street sweeping, etc.) and O&M.

I guess they can stop building things…ADA things…road things…but engineers do not like that and likely would not stay around long…or they may contract out/ let private development build anything new in the city for the next 5 years.

MY ADA PEDESTRIAN STIMULUS PLAN for the City (Tim lets talk): ‘A Back to the Small City Future’…
Shift 90% of the burden for providing pedestrian facilities (sidewalks and ramps) and repairing existing walkways to the property owner…as it has been in the City’s municipal code for 60+ years (Section 11.12.110)…implemented in a proactive and fair way (focus on shared community priorities: school zones, transit access, and traffic safety) vs. a reactive complaint based system. This code item has laid dormant on the books during the current City Manager’s term…I say use it or remove it [if it is no longer legally enforceable]. This could have been done with a soft touch during the real estate boom…if it had been tied to property sales – you ‘sell it – then fix it’.

The City of Vancouver can choose to spend the next 5 years building sidewalks not built between 1930 through 2000 and then the next 5 years rebuilding all the 100+ year old sidewalks (1903-1920) that have outlived their expected design lifespan (~50 years). By then things should be straightened out…I hope.