An encouraging note from the Police Chief’s office 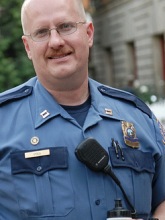 As I noted yesterday, there have been a lot of changes at the Portland Police Bureau lately and the Traffic Division – the arm of the bureau that is engaged with biking and transportation issues — has not been immune to them.

Today, former TD captain and now Assistant Chief of Police Larry O’Dea sent out a statement via email to a list of his “Traffic Safety Partners.” O’Dea has been a hugely positive force for traffic safety since he came to the TD back in January 2008 and, even though he left after 11 months for his current position, he has maintained an interest and involvement in the issue. With that in mind, here’s the text of O’Dea’s message (emphasis mine and shared with his permission):

I want to take this time to assure you that the Chief’s Office is committed to maintaining our momentum and the collaborative direction that we have been travelling with our partners over the last two and a half years. We are committed to supporting the multi-modal transportation vision of the city and recognize our role in helping to support the education, enforcement, and engineering efforts that continue to keep Portland’s transportation system a progressive model. I also want to assure you that the next captain that we assign to the Traffic Division will be one that I, Eric, and Chief Reese believe will continue this direction and maintain these critical relationships. In the interim, Lieutenant Parman – a familiar and trusted face- will continue to be available and will lead the Traffic Division. He will also help transition the next captain into their role and responsibilities once selected to the division.”

That folks, is what building relationships and working together is all about. And it didn’t happen by accident — it’s the result of years of work by citizens, advocacy groups, city employees and elected officials coming together to share concerns and work for solutions.

Thanks Asst. Chief O’Dea. We too look forward to meeting the next captain and to continuing to build a productive relationship between the community and the Portland Police Bureau.

W00t. Hopefully this is progress in the making.

Time will tell. The PPB have a lot of making up to do, in my opinion.

But this is a great way to get started.

I’m still waiting for the “I hate the cops” comments to pop up here. Best of luck to Mr. O’Dea in this ungovernable city.

Pretty cool to see a police organization recognize their role in developing a sustainable mode split!

What encouraging news! Proactive communication like this is notable from any government agency, especially the police bureau.

Way to set a good example, Asst. Chief O’Dea! Let’s hope this attitude trickles down to the Traffic Division’s actions on the street.