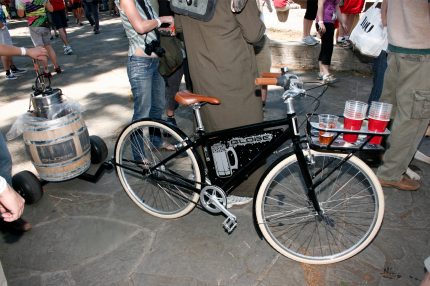 Globe Bikes will debut this “Beer Bike” in Portland at the Urban Assault Ride on May 23rd.
(Photo: Alex Warschauer)

When Portland’s Metrofiets partnered with Hopworks Urban Brewing to build a beer bike back in September, the story went viral and the bike itself has become nothing short of a phenomenon.

“It was designed to demonstrate that bikes are a convenient way to haul more than people.”

Now comes word from New Belgium Brewing that they’ve partnered with Globe Bikes to create their own, “one-of-a-kind Beer Bike.” The “Beer Bike” was designed by Globe Bikes “exclusively to deliver ice cold brew to thirsty New Belgium Urban Assault Ride party goers” and it make its public debut at that event in Portland on May 23.

Here’s how a press release describes the bike:

“It features a Globe LIVE bike and a custom trailer fashioned from an oak barrel imported from Germany. It was designed to demonstrate that bikes are a convenient way to haul more than people.

Egger [the bike’s designer] cut the top off the 13-gallon barrel so that ice and a small keg can be nestled inside it. High speed go-cart wheels were attached to the barrel which makes getting beer from point A to point B an easy task. The barrel trailer then attaches to the bike via a patent-pending yoke system.”

As you can see in the photo above, the bike also has a front rack with three cup-holders and room for a stack of plastic cups. According to a Globe Bikes spokesperson, the concept for the “Beer Bike” was, “based on the idea of dad’s basement bar from the 1970’s”.

You can see the bike for yourself on May 23rd at the Urban Assault Ride.

that’s not a beer bike. that’s a bike with a keg trailer…. nice touch… but not going to go viral…

Is there a bottle opener on the frame?

The trick will be not getting mobbed while riding it.

@bicycledave mine go that low, and i consistently scrape them when riding off tall curbs/steps. fortunately the back one doesn’t go quite as low so it’s rarely a problem but the front one sure does get bent regularly. fortunately it’s metal so it’s been bending instead of breaking. annoying to do a timesaving detour downstairs and then have to stop and spend awhile unbending anyway.

Oh boy, here comes Specialized’s cease and desist for anyone using the the words beer and bikes together.

The more beer bikes, the better. That’s what I say.

they wasted all the space for a framepack with chips inside!

Every time I see a new beer bike I hear the angushied cries of company lawyers worried about DUI liability and civil lawsuits.
It makes me feel all warm and fuzzy inside.

Join the Bike Temple Sunday May 30 for the Pew(k)ing Monk ride. We’ll be going to local beer establishments, including Mash Tun, Upright Brewing and APEX and drinking fresh brews! click on name above for more info or visit http://www.shift2bikes.org/cal/#30-1654

I’m with you. Why aren’t there more of these? WHERE IS THE OUTRAGE?!

That bike is weak!

seconded #14. one big fat MEH. both new belgium and specialized could do SO much better. this looks like a marketing department designed it in a 15 minute meeting.

I also think its a bit weak.

The hopworks bike is AWESOME, and is a true feat of ingenuity and bike building creativity.

I love new belgium, and what they’ve been doing for bikes and creativity on bikes, but they really could have done this one better.

Hopworks’ bike is not only awesome, it’s a work of art. Looked closely at that inlaid wood? The hub taps are, of course, their corporate cute pun; the entirety of the system is beautifully designed and, well, beautiful.

Correction: in the original post, we referred to Globe Bikes as a subsidiary of Specialized. Globe is a stand alone company and the post has been edited to reflect that fact. Our apologies for the error. See you Sunday! Sunday! Sunday!

What sucks is that Oregon Liqueur Control does not allow Hop Works to deliver beer with the bike.

Maybe Maletis beer distributor need to buy one, But i don’t see them biking up the Swan island hill with two kegs.

This bike brings beer. I don’t give one flip how the beer shows up, just so long as it does. Sheesh, people.

I’m on the Globe team, and the beer bike was the brainchild of myself and my boss. We were trying to think of something fun we could make for Urban Assault to use at their afterparty. I had never seen the Hopworks bike until now. We had no idea we were entering an unofficial competition until now!

I’m not going to deny it – their bike blows ours out of the water. That thing is amazing. Our bike looks like beer bike light compared to the Hopworks creation. We will have to give them a call next time we have an idea that involves beer and bikes.

Also, this didn’t start entirely as a collaboration – we got some input from the folks at New Belgium, but seeing as our knowledge and skill sets are limited to frames and wheels, we didn’t have the ability to trick it out properly with beer technology. From what I understand, New Belgium is going to make some mods now that we’ve got it into a workable form. So it is a work in progress.

Regardless, I hope you all have a great time at Urban Assault this weekend, and enjoy beer, if not beer bike light.

@Karl D
“What sucks is that Oregon Liqueur Control does not allow Hop Works to deliver beer with the bike.”

Not so, my friend. According to the OLCC, beer can be transported via bike provided that the kegs are not tapped via transport and that the beer is consumed at the stated location.

Looks like an interesting idea. I’m on board with bikey beer delivery, mixing beer and biking, and bike customization to facilitate post-ride brews. But, let’s see them do it with compost-able bioplastics or no plastics at all. In the pic it looks like they’re using the ubiquitous red polystyrene plastic keg cup. I don’t suspect that those are actually recycled. Please note that “recyclable” doesn’t mean it is actually recycled, even if it goes in the bin. Unfortunately, even in the Portland green-bubble, I can easily imagine the street littered with plastic once this bike rolls on away to its next stop. Think a few of those might make it into the river through our stormdrains or other vectors? More fodder for the Pacific garbage patch? I really hope not. Is there a plastics reclamation attachment for the frame or trailer so that the rider/beer-giver can recollect the cups before pedaling on? I really hope so. Jessica @#21, care to weigh in on the project’s plastic footprint?

I find it disturbing that alcohol and cycling go hand in hand in this town. The fact that right now in every Fred Meyer store there is a cool looking cruiser bike used as a display with a mountain of beer cases just pisses me off !!! What kind of message is this for our kids ??!!! I think bikes are the most wonderful things on wheels and the perfect thing for family activities.Alcohol has NO place in that scenario.Alcohol is a one way ticket to NOWHERESVILLE DADDIO !!!! It,s the same old B.S.,you can’t have fun without alcohol??? Talk about WEAK !!!! Even if it’s for your own personal safety PLEASE don’t operate ANY vehicle on city streets after drinking !! Wheels and alcohol DON’T MIX !!! Okay now you can start the deluge of negative responses to my comment,that is IF it gets posted. Anyone out there have the guts to back me up ???