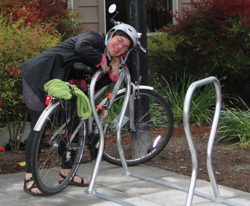 The Hillsdale Bicycle Coalition — who we introduced you to back in October — is celebrating their first real victory. Last Friday, crews installed three bike racks in front of OM Base Yoga in the Hillsdale Town Center (which happens to be an official, City-recognized town center) and the fledgling advocacy group says there’s a lot more to come.

The racks were funded through grants from the Portland Development Commission and the Hillsdale Community Foundation. Design and construction of the racks was done by local resident Jeff Castro (who some of you may remember is the owner of temporary bike rack rental company, BikeRacker).

HBC co-founder Dave Johnson sent out a press release about the new racks that included a quote from the co-owner of OM Base Yoga, Todd Williamson: “As a Yoga Center, we like to encourage students to slow down a bit, so it helps if they ride their bikes to get to a class. Having a convenient place to park their bikes really makes a BIG difference!”

For Johnson and the other volunteers and members of the Hillsdale Bicycle Coalition, these racks are just the first piece of a larger project to create a community plaza at the town center. Johnson says that, when complete, the plaza will have space for 20 bikes and seating for 10-15 people to, “talk, soak up the sun, and slow down to enjoy all the town center has to offer.”

Here’s a drawing of the new plaza: 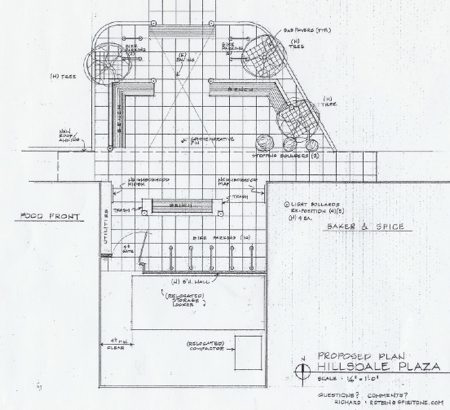 If you’d like to get involved with this project and/or the Hillsdale Bicycle Coalition, contact Dave Johnson at dave3401[at]gmail[dot]com.

Love it! I have been known to lock up to a railing in that location….

it looks like these have a flange on the bottom just like the one a while back where the rack was busted loose and the bike stolen. I think it would be better if the downpipes were set in concrete