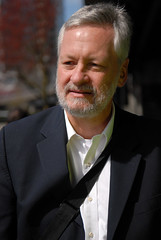 Robert Liberty wants to show the
DOTs that they aren’t the only ones
with ideas on how to fix the
I-5 bridge over the Columbia.
(Photo © J. Maus)

Metro Councilor Robert Liberty has just taken his opposition to the Columbia River Crossing project up a notch.

In a statement released today, Liberty urges people to send in their bridge design proposals. He writes that it’s “Time to leave the monster project behind and find some smarter, cheaper, greener solutions.” Liberty calls a recent project review panel appointed by DOTs from Washington and Oregon as nothing more than an “embarrassing… exercise in rubber-stamping” and a “waste of public funds on opinion management.”

Liberty says he wants to collect design proposals for the bridge that haven’t been given a fair look by the state DOTs:

“Many such proposals have been offered by thoughtful citizens in Oregon and Washington, including interesting mixes of upgrades or repurposing the existing bridges, supplemental lanes for local or freeway traffic, pricing to pre-pay for improvements and reduce congestion immediately, improvements to the downstream rail bridge to enhance barge movement and perhaps allow for commuter rail connections, and many, many others.”

As for what Liberty intends to do with the proposals he receives, “We need to show you don’t need $90 million, a huge staff and hundreds of pages of paper to come up with solutions that are smarter, cheaper and greener.”

CRC is so dead. How much $$ will we spend officially killing it?

Funny thing is that many great ideas have already been pit forth, but they didn’t line up with the project’s unspoken goals of massive size, huge cost, and complicated management structure to hide behind while the decision makers accrue power and dole out that money, collecting favors along the way. Any alternate proposal has to have a built-in “corruption factor” in it, or the powers that be won’t be interested, notwithstanding the merits of a design.

Metro Councilor Robert Liberty seems to making quite the PR opportunity out of jumping on the anti-CRC wagon. But exactly where was his support when things started?

Oh, thats right, he supported the massive bridge as a necessary transportation improvement for the 1.5 million people represented by Metro.

Since 2004 when Robert Liberty was first elected to a Metro spot, I have seen little REAL acts on his part to believe his current anti-CRC bit is anything more viable than a PR stunt.

As an attorney, Robert Liberty should be more aware of the silliness of his actions. Not only does he lack the authority to speak on behalf of the Metro, he has little authority to approve which CRC idea is made into reality. So, why exactly would any company put the time and effort to make a serious presentation of a idea to a person who lacks the authority to award the contract?

The CRC is becoming a circus and Robert Liberty has just auditioned to be the newest clown…..

The Regional Transportation Plan covering the CRC was approved by the same Metro council that Liberty sits on. It includes support for the very same 12 lane bridge in question now. Why does Liberty come out now to to claim the bridge is over sized?

Liberty is not running for office at the moment, so I’m more inclined to take him seriously than someone who needs votes soon.

mh (#7) very good point. Guess I am just sick of the flip flopping around the CRC project.

“And put it all on one page. Yes, one page. We need to show that you don’t need $90 million, a huge staff and hundreds of pages of paper to come up with solutions that are smarter, cheaper and greener.”

Why on earth would he want to limit proposals to a single page? Surely a good comprehensive plan for a bridge involves more than one page! He makes it sound like he’s against wasteful spending… as if he would have planned the CRC by soliciting 1 page proposals from the public.

Now I could be wrong. Maybe right now some hockey mom or joe plumber is out there scrawling out a visionary plan for a bridge to the future with crayons on their kitchen counter, but this really
sounds like political grandstanding to me.

Like Marcus said, Liberty understands the process and realizes he has a pretty limited voice in this. He’s certainly in no position to approve proposals. All he’s offering to do is “sort through the proposals and begin to share them with other citizens and elected officials on both sides of the Columbia River.”

Don’t get me wrong, I think the existing process is part of the problem… and many of the decision makers have inflated the project for personal gain… but even if Liberty was sincere… he’d be about as capable of changing the process as I am of changing the weather.

On an unrelated note, I predict sunny, beautiful weather tomorrow if you become my friend on Myspace.

Here is blog coverage of my proposal to place a Park Roof on the CRC Bridge.
thanks for looking

I overheard Liberty speak about how the CRC is gridlocked and going nowhere.

He mentioned that it would be very wasteful and against the ethics of Oregon to just tear down two good bridges to replace them. I think he is trying to present the idea of not building a new bridge, but of upgrading the existing bridges.

I am quite happy he is publicly sharing his ideas and opening up the discussion, before the state’s tell us to build it at whatever cost.

So…now will one half of the Interstate Bridge be Vancouver-Portland’s version of the Highline Trail (NYC project) with LRT? That would be a sweet idea;-)

Actually I would hold off on his task until the current patient is officially identified as deceased. Not just reported as ‘missing’ or a ‘runaway youth’.

Half of what Liberty is saying is great.

He is SO right that this process so far has been a nightmare and a colossal waste of time. And he is right that we should kill this bridge project in its current form.

But his suggestion that we can round up ideas from the public and come up with a fully fleshed out quality bridge is naive and populist pandering.

What the CRC has desperately needed from the get go is great design – or even just design that isn’t terrible. If you want expertise and talent, you need to go out and get it. You need to devote a budget to holding a real invited design competition involving a handful of the great designers in the world, not rubber stamping the flat bridge put out by your in-house freeway engineers.

But to suggest that there is some magic solution resting amongst the people is also patronizing. Just do this right!

By my way of thinking the biggest flaws with the existing CRC plan are the cost and that traffic bottle necks will move into already bad Fremont Bridge area and spill into the grid system of the neighborhoods. The issue of dividing Vancouver is moot, that is already done (but a park roof is planned to bridge the divide). The horror (sarcasm) of the Hayden Island Safeway having to relocate is hardly worth mentioning.

The flaws with the existing bridges are numerous and significant in the areas of both conveyance and safety.

The in the fish bowl of the Portland bicycle community and the echo chamber of this blog sounds resonates that confirm what readers want confirmed, that the CRC is dead. Don’t count on it.

Can we do the same for the Sellwood?

The charges that Liberty is late to the party on this, or has flip-flopped, are totally wrong. He has been the Metro Councilor who has pushed hardest to get his colleagues to take a critical look at the project. Here is a letter that Metro wrote in the fall of 2006: http://smarterbridge.org/sites/default/files/Council_to_CRC_Ltr_Oct_19_2006.pdf

Here are minutes of a follow-up Metro Council work session in early 2007: http://smarterbridge.org/sites/default/files/MetroWorkSession_02-13-07.pdf

As Liberty has said consistently from the start, it is a mistake to take the demolition of the existing bridges as a good starting point, which is what the CRC did. Those who merely criticize the esthetics of the current design make the same mistake.

Doug is spot on. Liberty was among the first, if not the first elected to opposed the DOTs’ CRC. Note as well that the Governors’ I-5 Task Force split down the middle in 2002 on including the arterial bridge option in the DEIS with City of Portland, Multnomah County, TriMet voting for inclusion. Staff promised that it would be, but it wasn’t.

And put it all on one page. Yes, one page. We need to show that you don’t need $90 million, a huge staff and hundreds of pages of paper to come up with solutions that are smarter, cheaper and greener.

OK, imma getting my crayons out.

I’m going to draw a rainbow with people walking over it, smiling.

I didn’t think to mention this before, but mine got posted on Portland Transport a while back: