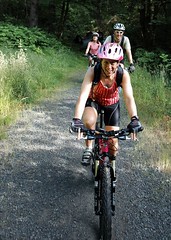 Tonight is the long-awaited open house to view bike trail access options recommended by the Forest Park Single Track Cycling Committee. At the event, you’ll have the opportunity to learn about all the options on the table, ask questions of committee members, and then offer your feedback to Portland Parks staff.

Three trail options will be presented at the open house. Details and accompanying trail maps of the options have not been fully released, but thanks to committee meeting notes and information provided by one of the committee members, we’ve got a good sense of what is included in each one.

Northwest Trail Alliance President Tom Archer says there are a number of new, short connector trails proposed in the area between Fire Lane 1 and the Thurman gate below Leif Erickson Road:

“The intent is to create a new entrance near the water tower below the Thurman gate [which would be called “Yeon Trailhead” due to its proximity to Yeon Ave.] and to create a link from the bottom of FL1 that would connect to Leif. In all, this might total 3-4 miles depending on the specific alignments.”

Archer says those trails are referenced in the Forest Park management plan so getting them permitted should not be an issue.

“Obviously we are disappointed that these [trail-sharing options] will not be included, in part because they would provide short-term access to single track trails within the park.”
— Tom Archer, President of the Northwest Trail Alliance

Other trail options on the table are to improve sections of a number of fire lanes (FL1, FL3, FL4, and FL5) by turning them into de facto singletrack. This would be done by effectively narrowing the fire lanes and making a circuitous trail down them. However, Archer points out that uncertainty remains on this proposal because the Fire Bureau must retain emergency access.

The committee is also forwarding a recommendation to officially open both Gasline and Tolinda Trails (which connect Leif Erikson to Hwy 30 and Germantown Road respectively) to bike access. Both trails (which equal less than two miles in total length) already have some single track and have been informally used by people on bikes in the past. However, since neither trail is recognized as a bike trail in the Forest Park management plan, if Parks decides to formally recognize them as being open for bikes, it could trigger a lengthy land-use review process.

You’re also likely to see a lot of recommendations about how to improve enforcement of illegal behaviors in the park. 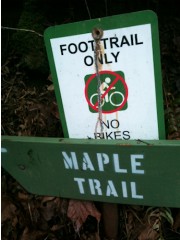 Despite support from mountain bike
trail advocates, sharing Maple
Trail was not forwarded as a
recommendation of the committee.

What you won’t see at the open house are recommendations to share existing trails that are currently off-limits to people on bikes. This has been perhaps the most polarizing and divisive issue for the committee since the outset. Archer says the committee looked specifically at the possibility of trail sharing on a section of Maple Trail and Ridge Trail. But in the end, consensus could not be reached so it will not even be on the table at the open house.

About sharing Maple and Ridge Trails, Archer says, “Obviously we are disappointed that these will not be included, in part because they would provide short-term access to single track trails within the park.”

Short-term access is an important phrase to keep in mind tonight. At the outset of this process over one year ago, the community was promised that single track trail access for mountain bikes would be expanded in the short-term. As it stands, there are not options on the table that would fulfill that promise.

Portland Parks and Recreation will make the final judgment about how to move forward with bike access in Forest Park.

For further reading, I highly recommend reading through the illuminating and educational discussions that have taken place here in the past two weeks. Specifically the comments on this story and this one. Also check our archives for complete coverage of this issue.

I hope to see a big turnout tonight.

Of course, some battles take longer than others, (starting in 1304 AD):

Sadly I won’t be able to make it. I trust BP will link to the online survey once it’s made available?

Unfortunately, it doesn’t sound like the committees’ recommendations will be enough to fulfill the Commissioners promises…

“My interest is not in studying this to death, it’s seeing what we can actually do. I assume everybody comes to the table in the good faith. I am committed to finding ways to significantly expand our current inventory of single track trails.” Nick Fish.

I wonder, if these new singletrack opportunities don’t constitute a ‘significant expansion’, what else can be done to meet these needs?

The meeting was very well attended. More cyclists than others, though the anti-cycling contingent appeared to be out in force.

Honestly, I think the committee went to monumental effort to put together a proposal that concentrates trail development in areas that are already considered lowest in natural values, minimizes impacts of increased use, and darn well ought to placate the elitist anti-bikers. There are only 4 miles of new trails, and a couple of SHORT existing segments to be opened to bikes to allow for more loop options and improve the riding experience. I can’t see how ANY reasonable person can justify opposition to this thing.

I agree with Glowboy, and think the committee did a good job of putting together what should be universally acceptable options. While I wouldn’t call myself an elitist anti-biker, I’m probably more on the conservative side of opening up trails. This is both for preservation of habitat as well as the fact that I use the park much more for hiking and running than biking. I went into the open house expecting to see/hear controversial proposals. What I heard were reasonable and well thought out options, which limit environmental impact and should have negligible impact on hikers/runners.
My hat is off to the committee, as I can only imagine how much time and energy it has taken them to work towards these proposals.

It kind of blows my mind that adding new trail is “low hanging fruit”, but sharing existing trails is too hard to come to consensus on. Oh well.