Detail of PBOT plans for a new bikeway through Ed Benedict Park in Southeast Portland.

As part of the new neighborhood greenway (a.k.a. bike boulevard) coming to Southeast Bush Street, the Bureau of Transportation wants to construct a two-way bike lane through Ed Benedict Park. If current plans get built, it will be the first time PBOT has installed a through-bikeway over an existing natural surface area of a park.

“”We are initiating this particular pathway to manage the interaction between pedestrians, joggers, cyclists, dog walkers and other typical park users to keep things safe.”
— Kyle Chisek, PBOT

The SE Bush neighborhood greenway is slated to go east of I-205 from SE 101st to SE 148th. The Bush route will be used during the East Portland Sunday Parkways scheduled for July and PBOT project manager Kyle Chisek says they hope to have the new bike lanes through the park finished by then.

Bike riding is legal in Portland parks, but bike traffic uses the same winding paths shared with other parks users. In Ed Benedict Park, the bikeway would be much more transportation-oriented in that it would go directly through park — separating bike traffic from more recreational-minded park users. 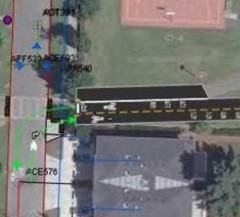 Or, as Chisek puts it, “We are initiating this particular pathway to manage the interaction between pedestrians, joggers, cyclists, dog walkers and other typical park users to keep things safe.”

PBOT’s first choice would have been to use surface streets for the SE Bush bike boulevard, but Chisek said they had to “think creatively about how to make connections” because East Portland doesn’t have the connected street grid common in inner neighborhoods.

Chisek says since they’ll be paving over grass, PBOT plans to “mitigate any impervious surface with green investments.” Conversations about the bikeway between PBOT, Parks, and the Bureau of Environmental Services are ongoing.

PBOT is currently in the middle of the public outreach for this project and Chisek says the response has been good. “Discussions with Parks and with the community about the path have gone pretty well so it’s definitely the direction we’re heading.”

— Learn more about this project and PBOT’s other neighborhood greenways on their website.

On a recent trip to Santiago, Chile; i noticed that they are building extensive cycletracks throughout the city for cycling promotion and safety.

The interesting thing is that most of their new cycletracks are built in parks or greenways!

The parks still have recreational walking trails, but now have dedicated bicycle through ways.

They use these new Cycletracks (“called “Ciclovias”) for their Sunday Parkways (“called CicloRecreoVias”) which happen in many different neighborhoods every Sunday. It is very nice to pedal through the park than in a bike lane.

Sweet. It would be nice to get one of these to connect Clinton St. through Franklin High/Clinton City park.

One correction, Jonathan. The Sunday Parkways event in SE Portland is scheduled for July, not June.

This is a great idea, and a great use of city public space to get around the connectivity problem. Hopefully it’ll lead to additional improvements in Portland east of 82nd. (now all we need is some love for the zone between 50th and 82nd)

nice to see! I hope we can have more of these in other areas of the city!

I would guess that since many cyclists argue against “paving the planet”, let alone “paving the parks” that they would be against this idea

what’s up with the new “neighborhood greenway” moniker? Is this an attempt to brand bike blvd’s with a different name?

I’m not saying I like or dislike it, this is just the first time I’ve heard the term used in an official capacity.

I guess this further distinguishes the North Portland Greenway as a “REGIONAL” greenway as opposed to a neighborhood greenway?

I don’t know how it would hold up in the Pacific NW but we have a type of paving here in TX that allows rain to flow through almost as well as grass and holds the moisture in even better. You can identify roads done with it during a drought because there will be a band about 3 feet wide of green on either side of the road and dead plants past that until the drought gets so bad that everything dies or goes dormant.

This is great news. I hope this signals the start of a productive relationship between PBOT and PP&R for more projects like this one. A similar opportunity that jumps to mind would be an east-west route through Alberta Park for connectivity on Jarrett.

Both are good to have, but they are complementary, not either/or.

RE: Neighborhood Greenways: I certainly get the difference and agree with your response to #9/Spiffy.

Any news on #7/ N’hood G’ways? Did I miss a press release? Maybe its been around a while and I just missed the coverage. Seems like kind of a big deal to be calling them Neighborhood Greenways now, though instead of Bike Blvds? care to edify me?

Why does this have to cut straight through the middle of the park instead of following around one of the edges where the cyclists using this as a road would be less intrusive than a child learning to ride in the park. I worry about those cyclists passing through because they are often very inconsiderate of pedestrians with their wanna be Lance speed attempts, get outa my way attitude….

A path like this through a park screams of space along side for a pump track.

I mean, since they are going to be moving the dirt around anyway…

The reason it cuts straight through is it is a transportation project that uses city property that happens to be a park, not a recreational trail. It’s not an MUP or anything like that, it’s a tiny road made just for non-polluting vehicles that won’t disrupt other park users with their noise and fumes. This is not the place for children to learn how to ride any more than any other commuting street would be.

I think it’s actually just inside the southern boundary of the park. In the photo, you can see houses and a street along the bottom edge.

For westbound trips, I’ll probably still take 104th to Powell and then get on the I-205 path. The signal at 104th & Powell trips quickly, even for a bike. I’ll probably use it going eastbound, though.

The most important upgrade to the Bush route will be the HAWK signal at 122nd. The route doesn’t really need much work other than that. Signs would be nice.

Yeah, I’m with Jim. I’m cycling to save green spaces and use exsisting infrastructure. Not to pave it over to make life as a cyclist as convienent as a motorists. I’m all for bike development I just think bisecting a park is the wrong way to do it.

Grass is not good for the environment anyway, so I don’t really see a big environmental impact here.

I do wonder how useful this will be in part because the curvy part at the end will force bikes to slow down. That’s great for safety, but as I person who commutes by bike, any situation where I have to slow down every block or even every 2 blocks makes the route infeasible. This is especially problematic with well-intentioned neighborhood bike routes that have stop signs every other block. Unless PBOT can build these bike routes so they have few stop signs and no hard turns, they aren’t doing me a favor – I’ll just use the main arterial.

At the west end of the path, shouldn’t the stop sign face 101st and not the Bush Street Cycleway?