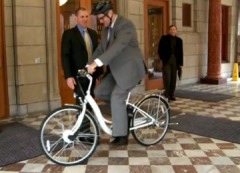 The Eneloop made a big splash at the CES trade show in Las Vegas back in January, leading Treehugger.com to say it “might be the bike that transitions us to electric assist bikes as a more primary form of transportation than cars.”

Sanyo has plans to build electric bike charging stations in Portland. Alex Kelley is Sanyo’s North American Business Development Manager for Solar Systems. During his visit to Adams’ office, he said, “Portland’s leadership in creating innovative bicycle policies and its focus on renewable energy development will play a strong part in making viable alternative transportation a reality for this region and beyond.”

Katja Dillman, Mayor Adams’ Transportation Policy Manager, says their new Eneloop bike will be added to the City’s bicycle fleet, “allowing city staff to get to and from meetings with greater ease and less sweat – while staying true to Portland’s love affair with bicycles.”

Watch a video of Sanyo’s visit to City Hall (and yes, Mayor Adams takes a spin on the bike):

After living in China I’m convinced e-assist bikes (and, OK, electric scooters) are the global future of personal transport. They’re the must-have lust object for working class Chinese, where cars are prohibitively expense — not so much to buy or drive, but to park. When a family trades in their Flying Pigeon for an e-bike they know they’ve made it.

An ebike would make a great replacement for a motor pool/fleet vehicle, especially for short trips downtown. Thanks, Sanyo!

I agree with the basic sentiment about e-bikes, and even electric scooters, being the most viable replacement for autos.
I also believe that any law regarding them on sidewalks, and probably MUP’s as well, needs to be as simple as possible.
Something like “Human power ONLY on sidewalks!”
or
“Walking Speed ONLY on sidewalks!”
It needs to be simple and not open to interpretation. From there it’ll become part of cultural manners; hopefully it’ll be acceptable to clothesline the errant e-bike rider zipping through a crowded sidewalk.
I look forward to seeing that on youtube.

I agree with the sentiments, Id rather see more ebikes than cars. But how would ebike get across Hawthorne? Seems to fast for the sidewalk but too slow for the lane. Obviously education and respect will be key to it being successful.

License e-bike riders in the same way as moped riders.
The economic hardship argument against licensing cyclists is not relevant: if the user can afford more than several hundred dollars to purchase an e-bike they can afford some cheapo license. Seems ODOT has some guidelines on the requirements for e-bike riders. I find myself thinking that licensing needs to take place for e-bike riders in advance of the numerous pedestrian injuries that will take place when the unskilled start careening around town. This way you have some right to revoke when the e-bike rider consistently proves them self incompetent.

Ultimately, if an e-bike is too fast for MUP’s it may need to be classified as a moped.

I wish Adams had slipped on that wet concrete in front of City Hall. All publicity? GOOD publicity!

The Sanyo bike is a pedelec so the speed is controlled like you do on a standard bike–you have to pedal to move. Maintaining a walking speed while riding it would be no more difficult than on a conventional bike. The maximum speed under motor assistance is 15mph so it is very much within the speed range of conventional bikes on bike paths/lanes. Since pedelec bikes are much more like a bicycle than a moped, I don’t see any reason to push to have licensing requirements for them. Our goal is to get non-cyclists riding by giving them a bike option that hasn’t been available to them. Licensing requirements would probably be counterproductive to the goals of all bike enthusiasts.

I recently researched electric bike rules around the world. They are anything but standardized.