Many in the local bike scene were dreaming about a $98 million package Metro applied for that would have connected and built trails on the West Side and would have created America’s first world-class neighborhood bikeway system in North and Northeast Portland.

But it was not to be.

The competition for TIGER grants was steep. In total, the USDOT received 1,380 applications from all 50 states (and D.C. and three territories) that totaled $56 billion. Today’s announced doles out $1.5 billion to 50 projects.

Oregon submitted 21 TIGER grant applications for a total of $848 million in requests.

Sec. LaHood visited the South Waterfront district back in July where he had high praise for Portland and for streetcars. 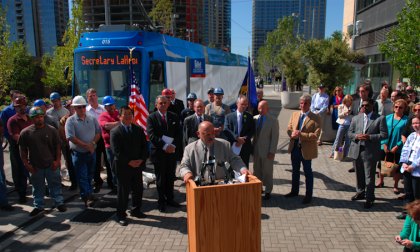 US DOT Sec. LaHood attended
this streetcar press conference in
South Waterfront back in July.

“TIGER funds will be used to reconstruct SW Moody Avenue in the South Waterfront area. The project will elevate the roadway by 14 feet to cap contaminated soils. It will include three traffic lanes, dual streetcar tracks and pedestrian and bicycle facilities. The project will introduce infrastructure investment to support future development.”

While the Portland region’s big bike dreams didn’t come true, the USDOT did award funding to two bike projects. $20.5 million will go toward the “Indianapolis Bicycle and Pedestrian Network” project and $23 million will go toward the “Philadelphia Area Pedestrian & Bicycle Network.” (It’s also worth noting that many of the other project are likely to include biking and walking facilities.)

Metro’s Active Transportation Partnership project manager Lake McTighe organized the $98 million TIGER grant request. She said she’s already moving on to other potential funding sources and sent out an email today saying, “I will be looking into the story behind these projects [from Indianapolis and Philadelphia] and what made them winners.”

More on the TIGER grant announcement at the USDOT’s “Fast Lane” blog.

I’m bummed that the Metro grant request did not get funded.

While I’m glad Ray can think big about streetcars, we need to get him thinking very big about bikes.

Bummer for us but at the same time excited to know that bike infrastructure is growing in other parts of the country.

“can think big about streetcars”

IMO, federal peanuts for cosmetic road work in the “innovation” quadrant is not thinking big.

It is worth noting that the two bike and ped projects that were awarded had substantial matching funds. The Indianapolis project “Leverages significant contributions–$26.5 million–from private foundations, individuals and local corporations”. This is something that we need to see more of in the Portland metropolitan area. I think our application was hurt because we could not leverage that kind of match.

interesting that the bike projects in the TIGER proposal are not also included in the 2030 plan. wonder where that leaves these.

Am I missing something? Is there a section of Moody that doesn’t already function at an exceptionally high level for people riding streetcar, those on foot, and those on bike? While I appreciate the boost elevated tracks/contamination capping could give to (re)development in the South Waterfront, is subsidizing more development in that area really a high priority right now? Isn’t this the very same district where we’re having an ongoing condo firesale?

How can this project possibly provide a better return on investment than bicycle, pedestrian, or streetcar infrastructure in an area that actually needs it?

I believe PBOT’s contributions to Metro’s TIGER proposal were submitted well before both the 2030 Plan had been finalized. Moreover, the contributions were made before the public involvement/comment period – during which many of the initially proposed routes were modified, eliminated, and/or added to – had come to a close, so it’s not surprising that not all of the TIGER projects are represented in the 2030 Plan.

That said, the vast majority of the corridors that were included in the TIGER proposal did indeed make it into the 2030 Project List.

Can Tiger funds be used for BRT, LRT projects as well? Surprised to see streetcars do so well. I’m all for streetcars, so long as we put into context their high cost and relatively low area of impact, especially as that compares to a cheaper BRT project that might cover more of a metro region. Indianapolis is growing a significant network of trails, it will be interesting to see how they use their TIGER grant.

re comment 10, on looking closer, i agree you are correct: some portions of the TIGER proposal are included in the 2030 plan. a couple that are not, however, include a cycletrack on vancouver and striped lanes on northeast knott, both of which i would argue are unnecessary — and in the case of knott actually counterproductive. and interesting you note that these (unlike, at least arguably, the items that were included in the 2030 play) have not been subject to public comment, as this is the basis on which PBoT has asserted that facilities that were part of the previous bike master plan had a public hearing and are subject to the mandatory sidepath law.

And more public subsidies for the south waterfront?

I think the money would be better applied elsewhere, such as fixing the Oleson/Beaverton-Hillsdale/Scholls intersection. Or getting rid of the 70s style bike path on Garden Home Road west of Oleson. Or filling in the gaps in the bike lane on the Barbur bridges. Or eliminating the bumpy storm drains in Hillsdale from when they repaved Capitol. Or repainting the blue bike lane from Beaverton-Hillsdale onto Bertha with that nice green paint (OK, thermoplastic) they’ve lavished on other parts of the city.