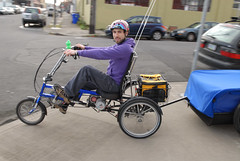 A year and a half ago, Portland residents Jed Lazar and Shauna Lambert launched SoupCycle to bring fresh soups, salads and breads to anyone with a soupscription. On Wednesday, they’ll make their 10,000th delivery.

This pedal-powered (and electric assist) soup delivery company has gone far beyond being just a novelty and has ridden Portland’s love for bikes, good food, and local businesses to truly commendable heights. Since they started up back in 2008, Lazar, Lambert, and their “Souper Hero” employees have ridden over 3,300 miles. 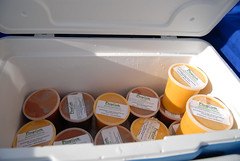 Besides making their own business fly, Lazar and Lambert have inspired others to start bike-based endeavors. Lazar is also a founding member and an officer of the non-profit, Bicycle Business League. The BBL provides advocacy and networking opportunities for its members and offers support and advice for businesses who seek “bicycle-based solutions.” The group first came together back in May 2009 and their current project is to garner business support for the 2030 Bicycle Plan (at the City Council hearing on the plan Thursday, the BBL is expected to present a letter signed by 100 local businesses).

Lambert says using bikes is far from an impediment in a city where bike traffic is common. In fact, says Lambert, bikes have some key advantages over cars. “We don’t have to deal with the expense of a motor vehicle or the rising costs of gasoline. And surprisingly, bicycle delivery isn’t that much slower than delivery by car. In fact downtown deliveries are faster because you aren’t competing for limited parking.”

SoupCycle’s success is proof that bike-based businesses can flourish, especially when you have all the right ingredients.

I’m one of the happy members of the Soupetarian tribe. Jed and Shauna (and Jen and Matt) concoct fantastic soups each week. I can’t wait to put my cooler out each Wednesday morning. Congratulations SoupCycle!

Great that they’re using bikes for the service, but are they using disposable/one use (plastic?) containers for their products? If so, still a ways to go until truly “sustainable.”

Their Clam Chowda actually has TONS of clams in it, It’s Souper!!
Congrats!!

way to go Jed and Shauna! Keep it up and spread the soup love.

Stefan, #4: I reuse mine over and over. Hardly one use containers. Nevertheless, I think SoupCycle’s goal is to move to reusable containers that would be reclaimed each week to use the next week.

Thanks to everyone for your comments! We’re so excited to be at this landmark and wouldn’t have made it this far without your support! Stefan- making the shift to reusable containers is one of our dreams for SoupCycle. We’re working to figure out the nitty gritty- like finding a container that is durable enough to withstand the occasional bike delivery bump, and talking with the health department to make sure they’re ok with us using reusable containers. We’ll do all we can to make it happen. Thanks for the comment!