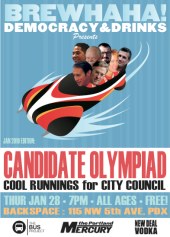 At an event later this month, the slew of candidates looking to unseat City Commissioner Dan Saltzman (and maybe even Saltzman himself) will face off in a “meet the candidates” forum hosted by The Portland Mercury and The Bus Project.

“Candidate Olympiad” organizers have decided on three lines of questioning they’ll use to tease out which candidate deserves your vote (or signature, since the event will be held the night before candidates must turn in 1,000 signatures if they want public campaign financing). The topics are:

1. Bikes and transportation
2. The Columbia River Crossing and the environment
3. The police

Seeing that bikes were the first topic, I asked Portland Mercury News Editor Matt Davis what type of questions they’ll ask. He replied with the usual suspects like: What percentage of the City’s transportation budget should be spent on bikes? Where should the City get the money to fund the Portland Bicycle Plan? and others. They’ll also be taking audience questions and you can suggest questions either here in the comments or by emailing the Mercury’s news desk via news[at]portlandmercury[dot]com.

Keen political junkies will wonder what’s the use of asking these candidates their opinions on transportation issues when the seat they’re running for doesn’t even oversee the Bureau of Transportation (PBOT).

Well, consider this: Yes, Commissioner Saltzman oversees the Police Bureau and doesn’t oversee the PBOT (that’s in Mayor Adams’ portfolio). But if Saltzman loses his seat, there will likely be (even more) pressure for Adams to take back the Police Bureau (which usually never leaves the Mayor’s hands to begin with). If Mayor Adams does take back the Police Bureau, he’d have to make room for the extra workload… Would he then hand off PBOT to the new commissioner? Everyone knows transportation is Mayor Adams’ baby, but both of the current front-runners — former PBOT spokesperson Mary Volm and former PSU staffer Jesse Cornett — have expressed keen interest in overseeing it.

This race is full of colorful candidates (I’ve sat down with three of them so far) and it will be very fun to see how they respond to the issues we care about. Mark your calendars and come ready to have fun with the Winter Olympics theme:

Darn it! I knew that date was familiar, I will be at “Snow Falling on Cedars”. Will someone please record it and post it here or on You Tube?

I would greatly appreciate it.