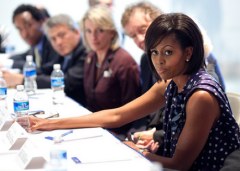 America has a long legacy of First Ladies who have used their diplomatic profile to further specific causes, so I was very pleased to learn that Michelle Obama’s focus would be obesity.

Anyone who has spent time in the bike advocacy world knows that the obesity epidemic is often thrown around as a key reason why our country needs to put a higher priority on biking. So, is the First Lady’s focus on obesity and “healthy families” something to get excited about?

“Having such a prominent leader behind the effort is certainly going to help those of us working on the issue to gain traction.”
— Robert Ping, Safe Routes National Parternship

I put that question to the State Network Director of the Safe Routes National Partnership, Robert Ping. Ping works out of an office in North Portland and is the former Safe Routes to School coordinator for the Bicycle Transportation Alliance.

“Having such a prominent leader behind the effort is certainly going to help those of us working on the issue to gain traction.”

Ping said not only will Obama’s presence help, but it will also give momentum to the $500 million childhood obesity project that his organization is working on with the Robert Wood Johnson Foundation. That project looks to reverse the obesity epidemic by 2015.

And what about obesity as a way to make the case for Safe Routes to Schools programs? It’s a perfect fit says Ping: 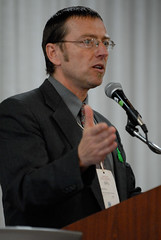 “I think the obesity crisis is a great wagon to hitch our efforts to. We can argue ‘alternative’ transportation until we are blue in the face (which we have for forty years now!), and still lose the hearts and minds of the public and elected officials. But health in general and the obesity crisis specifically, are hard to argue against, especially when you talk about children living shorter, less vital lives than their parents – potentially the first generation in history to be in this position.

It’s not yet clear to what extent First Lady Michelle Obama will get involved with these issues, but it’s great to have another high-profile leader pushing for healthy families and livable communities. Who knows, maybe Mrs. Obama will make a quick visit to the upcoming National Bike Summit to meet the nation’s Safe Routes bigwigs. We’ll keep you posted.

An EXCELLENT cause, but a VERY difficult one to address. It seems to me that the first step is to get people – kids especially – away from the computers, playstations, TV’s, etc. and yet all of that is SO ingrained into American culture.

I applaud Michelle Obama ( and any other public health or school advocate) for focusing on this issue. I do hope that she does include walking and biking to school as one way to combat obesity, but as a teacher ( who rides to work almost every day), I know that it’s going to take our school districts and our land use folks in the City or County to adopt a little bit forward thinking, and create an infrastructure to allow kids to walk and bike to school.

Not all kids can safely walk or ride their bikes to school because there are no designated crosswalks, no funds for staff to arrive early enough to have crossing guards, and no infrastructure changes to slow down driving speeds, no sidewalks, or inconsistent sidewalks.

Washington County did a traffic count at the main intersection near our new school this fall, and they said that the number of cars were not high enough to install a stop sign, traffic light, or decrease the speed limit by 5-10 mph in order to establish a 20 mph school speed zone. Wash Co’s report also said that lowering the speed limit in this stretch of roadway could cause more accidents.

I made the naive assumption that since plans to build a K-5 school were in the works for years, that Washington County, the school district, and other players, would have thought about this issue well before the doors opened up. Not only as a safety issue, but as a way to encourage walking, biking, and to combat obesity.

Elaine, Washington county’s planning is as autocentric as it gets–they put much, much too much emphasis on the convenience of motorists.

What Stochelo said. You’re fighting a loser’s battle in that place.

That being said, I commend you on being the underdog and hope you don’t give up the fight.

“Safe” or “Safer” Routes? Didn’t I recently read that they were proposing to change the name? I see both forms used on the Safe Routes website http://www.saferoutesinfo.org.

Put simply while Michelle Obama is right to bring this up as an issue it is not okay for her girls to be the subject of the debate. Furthermore In the current highly charged debate surrounding the obesity epidemic why is it that overweight people are often seen as lazy and lacking will power while people with anorexia are seen as suffering from a biological illness. How can this be?

Why are fat people ‘lazy’ and people with anorexia ‘ill?’ Perhaps it is time to consider the work of authors Fiona Place and Gary Taubes.

In his book Good Calories, Bad Calories. Taubes suggests it is our high sugar, high carbohydrate diet that is to blame – that we are constantly stimulating our insulin production and our appetites. He certainly creates a convincing argument. Overweight people are overweight because of what they eat. They are not lazy. They do not lack will power.

Similarly in her book Cardboard: A woman left for dead Fiona Place argues that anorexia is more to do with a person’s inability to define a sense of ‘self’ through words rather than the individual suffering from some biological illness. That people with anorexia starve themselves as a way of expressing their sense of self, their individuality. And that while they may be ‘ill’ they are not suffering from some biological condition. It is not simply in their genes.

Both books certainly have something to offer. And it is time to look at this debate through fresh eyes.
Perhaps the low fat high carb diet needs to be reviewed. perhaps we need to start looking at what it is young women are trying to express by being thin.

yes biking will help the children to loose weight. great way.. This happens lot in Denmark.