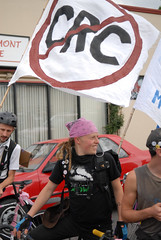 Last week, Columbia River Crossing project staff and state DOT officials from Oregon and Washington pitched a kinder, gentler version of the controversial project to legislators in Salem. Responding to widespread criticisms that the project is too big and too expensive, CRC backers have trimmed $650 million from the cost of the project and reduced the number of lanes from 12 to 10.

But, while the revamped plans have won support among some lawmakers lured by the potential of thousands of jobs, the move has emboldened grassroots opposition. The Coalition to Stop the Columbia River Crossing sent out an email one day after the new plans surfaced claiming a “Big victory on the CRC!” and used the opportunity to rally the troops for a protest action.

“Why waste more of the public’s time and resources cutting elements one by one from an unpopular plan that we can’t afford?”
— from a blog post by the BTA encouraging attendance at an anti-CRC protest

On December 4th, when the CRC’s Project Sponsors Council meets in downtown Portland to approve or reject the new proposal, the Stop the CRC group plans to rally in protest with street theater and “a massive turn out” to oppose the “new and (not) improved plan.”

The scaled back project proposal also seems to have only increased calls by the Bicycle Transportation Alliance (BTA) to scrap the plans altogether. The BTA has already joined other non-profits to push for a complete re-start to solving congestion problems in the I-5 corridor, but now they’ve thrown their weight behind the grassroots for the first time. In a blog post last night, the BTA wrote:

“Why waste more of the public’s time and resources cutting elements one by one from an unpopular plan that we can’t afford? Join grassroots opposition group Stop the CRC! on December 4 at the Project Sponsors’ Council meeting to demand that we start over with a smarter project built upon shared goals. We all have an interest in expanding transportation options and reducing the strain of automobile dependency…”

Is this support of Stop the CRC! a sign of the “the more aggressive organization” the BTA has said they’d like to become? Do anti-CRC groups smell blood now that the state DOTs have retreated a bit? Will the scaled-back plans help the CRC re-gain its momentum? Stay tuned for a report from the Sponsors Council meeting on December 4th.

Up here in Clark County there are some who ‘misunderstand’ that the reduction from 12 lanes to 10 lanes means dropping the LRT portion of the project.

Assuming the anti CRC coalition succeeds…If the project stalls and tries to reboot to 2.0 CRC …I wonder if the state legislatures and federal government will balk at paying for more studies?

I doubt it – I doubt there would be another joint FHWA and FTA project. They might see the logic of breaking the project into smaller more water tight elements (highway only or LRT only) – thus with more stable partnerships.

So as a local area bicyclist and transit rider, I would hope the anti-CRC forces have their Plan B already running to ‘locally’ fund the LRT and bike ped way portions of this project now…much as has been done in the part by Portland to fund the Yellow Line extension, etc. Versus having to wait another 10 years to start the redesign.

The amount of lanes designated for each mode of transit should be inversely proportionate to the carbon footprint of that vehicle.

Why add more lanes of highway? That’s the big question to me. All that does is enable and encourage more automobile use, and that’s clearly something we need to be stifling, not encouraging.

Make it an LRT and bike/ped project ONLY and then you’ll have my support (and my tax $$$).

Todd #1, by “locally” funding LTR from Vancouver into Portland, do mean that Clark county would fund it? Maybe a C-Tran Max? Just wondering.

Fix the rail bridge alignment issue.
More freight goes over the rail line than the I-5 bridge.

MAX across? YES!
Tolls on the I5 and I205? YES!
World Class Bike and Pedestrian Bridge? YES!
More than six lanes? NO!

Jonathan, any chance you have an article in the works about the upcoming METRO presidential elections, and about the stance(s) that the candidates have on the CRC proposal?

“Jonathan, any chance you have an article in the works about the upcoming METRO presidential elections, and about the stance(s) that the candidates have on the CRC proposal?”

yes. most definitely. it’s been on my list for a long time. thanks for the nudge.

Spot on! I forgot to mention that tolls on both Interstates (hell on any highway into Portland proper) are a necessity.

‘Cuz these people sure as hell aren’t paying my taxes by shopping in my city.

Regarding MAX accross the river: hasn’t Clark County voted down light rail multiple times? Sure, maybe some would use it to commute into Portland. But would it be the people who now use single occupancy vehicles or those who now car pool? Would it reduce congestion (and reduce emmisions)?

Adding MAX across the river is unlikely to reduce congestion on I5.

Add a toll on the current bridge, along with the MAX as an alternative option, and then we might start to see some change in mode share, congestion, and emissions.

I’m all for a new bridge… make it MAX, Bike/Ped, and a Frieght-Only lane, and we’re in business.

The strongest argument the CRC proponents have is with regards to accommodating free-flowing freight traffic. Why build lanes for cars, when they’ll just get in the way again?

You are completely 100% correct, which is why I referred to shoppers, not workers.

On your other point, we have no way of knowing if they won’t build it. I happen to know quite a few Vancouverites that would be happy to grab a MAX rather than drive themselves (and only themselves) to the closest Park n’ Ride every M-F.

Politicians will not dare question anything if there is a tiny chance they might sound anti-union or pro-terrorism.

Myself and other volunteers are going to call all the local politicans and document if and how they support a CRC project. All the local non profits can’t do this work due to IRS restrictions. Portland needs a Sustainable PAC, and not setup by democrats.

email me at my website or call me.
http://www.joerowe.com

“These people” ought to pay our state income tax because they are taking a job that an unemployed tax-paying Oregonian would love to have.

They all ready do. People who live “over there” and work in Oregon pay both Oregon State income tax AND local county tax (be it Multnomah, Washington, or whathaveyou).

My understanding is that even the scaled down, 10-lane option will still have 12 lanes, only striped differently as shoulders. These, in time, might then be turned into travel lanes.

BTA’s position? Scrap the whole bridge?
What part of interstate travel do they not understand? Why are they against LRT? I can understand being partisan for local infrastructure, but ‘local’ should include those residents of Vancouver that are forced into crappy alternatives to get to PDX to work…

what does “LRT” stand for. Please define acronyms the first time you use them. It helps those of us who are new to these debates and trying to educate ourselves. Thank you.

“These people” ought to pay our state income tax because they are taking a job that an unemployed tax-paying Oregonian would love to have.”

Who do you think is HIRING them, chucklehead? Might it be possible that the person across the river is more motivated or a better worker?

What time and Where will the protest be? I can’t find it in the article?
Jeff

This entire combo is cheaper than the nasty CRC project and it’s more effective.