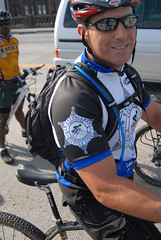 Joe Scalise is a bike patrol officer
in Charlotte, NC and the training
coordinator for LEBA.
(Photos © J. Maus)

If the streets feel a bit safer this week, it’s because Portland is playing host to a Law Enforcement Bicycle Association (LEBA) training conference.

The Portland Police Bureau is hosting LEBA for one of their ongoing instructor training courses. Held throughout the country, the week-long course trains the officers in the many skills specific to doing police work on a bike.

I caught up with the group as they rode down Burnside (riding two abreast, taking the full lane, and nearly running a red light at MLK Blvd.) en route to a skills training session under the Morrison Bridge this morning. According to LEBA Training Coordinator Joe Scalise of the Charlotte-Mecklenburg PD, 15 officers from around the country are in Portland to sharpen their bike patrol skills. 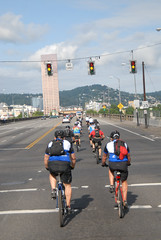 The group rolls down Burnside.

Scalise said they’ve got a wide range of plans for the 6-day training course — from off-road riding to emergency braking. “Portland’s been great so far. I’ve never seen so many people on bikes. Even in the rain!”

Scalise is a big proponent of bike-mounted police officers. He said they’re a much a cheaper and effective way to patrol the streets. In his hometown of Charlotte, North Carolina, Scalise says they’ve got 30 full-time bike officers in the uptown area, 20 others scattered throughout the city and “several hundred more” who are trained in bike patrol. 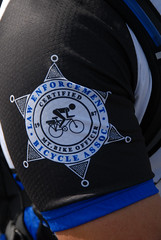 Here in Portland, bike patrol officers have been awarded by the bureau for their “immeasurable impact” on the communities they serve. Unfortunately, because of what they claim are budget woes and a lack of manpower, the Portland Police Bureau has only four full-time bike patrol officers.

The recent precinct consolidation has led the bureau to put the Southeast Bike Patrol Unit — the only one outside of downtown Portland — on temporary hiatus, leaving downtown’s Central Precinct as the only part of town with active unit.

The LEBA training session will run through Saturday.

So Jonathan, did you follow them through the yellow/red light??

dang it. i knew someone would ask that. Yes I did. I was shooting photos through the intersection and didn’t even realize it was yellow until i got back to the office and looked through them. guilty as charged.

A cops-and-robbers chase through the streets of PDX would be pretty cool. But they can’t skid out like Starsky and Hutch did back in the day.

Citing budget as a reason for fewer bike cops is odd. I guess maybe it’d cost something up front to train them, but surely patrol cars cost a lot to operate. Do we have [m]any Portland police on foot patrols?

Seems a pity that in the mecca of cycling in the US, our police haven’t kept up with the times.

So Jonathan, did you give yourself, volenteer for a citation. Just wondering, HaHaHa. Great piece, I think you should have invited the officers to the New Belgium parade tomorow afternoon. Really get them in tune with Portland. Lets create a sister city police bike patrol city. Maybe both cities could gain from the co-operation.

“Citing budget as a reason for fewer bike cops is odd.” Nick

There’s a lot invested in that training. I imagine the decision of how they should get around on their beat…foot, bike or car, has something to do with which transportation mode can be anticipated to best help to generate the desired return on that investment.

I think though, that there are solid arguments favoring more cops on bikes.

I was displeased to observe an officer riding on the sidewalk, cutting into the traffic lane without stopping and running a stop sign. There was nothing to indicate that these violations and bad examples were part of the officers duties.

We could use more cops on bikes following the rules and setting an example.

Below is a link that might answer some questions. We try to send bicycle officers out in pairs for their safety, as they don’t have the shielding and extra tools that come with a police car. But that means you have to pay two officer salaries for one, more limited-range patrol unit (bicycle-mounted), instead of one officer’s salary for a longer-range unit (in a patrol car). (Most patrol units in Portland are one officer in a police car, but the cost of a police car is amortized over many years, and gasoline is cheap compared to paying an officer salary of between $30-$40/hour.)

A cop on a bicycle just doesn’t have the fear and intimidation power as a cop driving a big bad phallic machine like a dodge charger.

“A cop on a bicycle just doesn’t have the fear and intimidation power as a cop driving a big bad phallic machine like a dodge charger.”
Precisely why we should have more of them.

I bet so many BikePortland readers could out pedal the LEOS on their bikes!

What I want to know is where can I get a cycling jersey with a big badge on it like that? I bet I wouldn’t get harassed by drivers then!!

Disastronaut has it right! Another way to look at it is that police on bikes are more approachable, which means they’re more likely to get woven into the fabric of the communities where they work. Also, thanks for the cost breakdown, PoPo. I always wondered why the beancounters say bike patrols are more $$$.

I believe in the right to take a lane as we are traffic, and often find myself doing so when I think it is the safest course of action, but in that photo, isn’t that a bike lane on the police’s right?… and if so, isn’t there some duty to ride in the bike lane when it is available and safe to do so?

Yes Ben, the police are breaking two laws in that picture, failure to obey a traffic control advice and failure to use the bike lane without one of the enumerated exceptions.

But don’t you follow the news? Police officers in Portland are above the law.