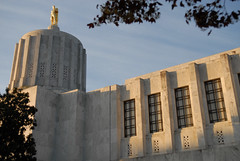 House Bill 2001 is still being worked on down in Salem, and amendments published earlier this week were very bad news for bike funding. The BTA was very disappointed in how the bill was shaping up and they signed onto a letter (download PDF copy) with a host of environmental and land use advocacy groups outlining their concerns.

Yesterday evening Bricker was in Salem for a hearing on the bill to testify in front of the Special Joint Committee on Transportation. One part of his testimony pertained to the new Urban Trail Fund.

Initial amendments had very weak language for the fund in terms of recognizing bicycles as a legitimate form of transportation. It had no clearly defined funding source and lawmakers had placed the fund under the jurisdiction of the State Parks and Recreation Department.

In his testimony last night, Bricker said, “In order to recognize the legitimacy of bicycling and walking as transportation alternatives, we strongly believe that this fund must be placed in ODOT.” In addition to that change, Bricker urged lawmakers to change other language in the fund definition.

“… Moneys in the fund are continuously appropriated to the State Parks and Recreation Department to develop and maintain recreation trails for nonmotorized vehicles and pedestrians that supplement or provide links to urban transportation corridors.”

And here’s the new language (from amendments made public after the hearing last night):

“…Moneys in the fund are continuously appropriated to the Department of Transportation to develop and maintain multi-use trails within urban growth boundaries for non-motorized vehicles and pedestrians that supplement or provide links to roads, highways, footpaths, bicycle trails, and public transit.”

Bricker says he is working to get guarantees from lawmakers about how much money they’ll put into this fund and to garner commitments about what other funding sources might feed into it.

In an email to me today Bricker wrote that, “I believe that it [the Urban Trail Fund] is a very important organizing principle.”

This fund might have some potential, but let’s not forget that HB 2001 also includes a list of $840 million in earmarked highway projects and includes no increase in dedicated bikeway funding.

We’ll have more coverage of all the Salem action next week.

Relieved to see that the language was changed. The belief that bikes and feet are for recreation hobbles progress toward balanced and efficient transportation policy.

I suppose it’s unavoidable for now… but the bill still ghettoizes bikes and walking. Someday we’ll get to the point where transportation actually means “getting from one place to another,” rather than “let’s build more roads and parking lots for cars and trucks.”

Andrew, I feel you. One of the deep insults of HB 2001 is that it demonstrated beyond any doubt that ODOT sees “transportation” as equivalent to “building highways for cars.” Transportation should simply be about getting people from point A to point B, no matter what their vehicle.

Agreed,it is much better language. However, it is only language at this point. The crucial next step is to translate it into legislation and active policy. Which means active conversation with your legislator, as well as State Senator.

In Portland, I am aware of several groups working on transportation trails. Statewide,there are probably more. Include in this discussion the many pedestrian advocacy groups. We need to lock arms and let the Legislature know what needs to be done.