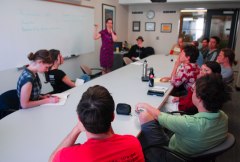 There is some serious momentum afoot for Portland’s growing number of bike-based businesses to organize into some sort of alliance. Nowhere has that momentum been more apparent than at a meeting to discuss the idea held at the Portland Development Commission’s downtown offices this morning.

The idea was first floated over a month ago by Hannah Sandmeyer of Q19 Greening (a company we profiled back in January). Sandmeyer sent out an email to several bike-based businesses wanting to gauge interest in coming together for a meeting to talk about how to “support and collectively empower businesses that run on two wheels.”

The response was very positive and this morning, well over a dozen people representing a number of businesses packed into a meeting room to brainstorm ideas and prioritize what they’d like to see in a new organization.

The shared trait of all these companies is that they operate bicycles on roadways as a primary part of their business. 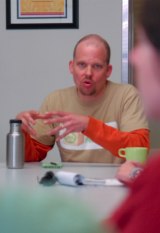 The meeting was facilitated by Michelle Poyourow of the Bicycle Transportation Alliance. She helped the group discuss what it wants in a new organization and then listed a set of agreed-upon priorities. Right from the start, business owners threw out ideas and their energy made it clear that this fledgling organization has some very real potential.

This was just the first meeting and there are obviously many issues and action items to flesh out, but the networking and discussion that happened this morning are a very positive sign. In the end, the group voted on their top priorities going forward. Those were: Political representation and lobbying; pooling of marketing resources; finding insurance coverage (a big issue for bike businesses); acting as an incubator for new bike-based businesses (or helping non-bike businesses do more on bikes); and being a source of networking for business development.

At this point, it hasn’t been decided if the group should remain a stand-alone or if it should officially link up with the BTA. Another meeting is being scheduled to hash out those and other issues.

In other bike business news, there’s a separate effort going on to create a more formal bike-friendly business alliance — a new group that could help stand up to the not-always bike-loving Portland Business Alliance. More on that effort coming soon.

Most excellent news! Had I known this meeting was happening, I woulda been there. I, too, have an idea for a bike business, and something like this is EXACTLY what this town has always needed.
There USED to be some kind of ‘Portland Bike Shop Alliance’ typr group, but it dissolved for some sort of reason.

Please keep us all posted on this. Who do we contact for more info on BOTH groups?

And no contracting with the BTA for ‘lobbying services’ or any other such nonsense.

This is a fantastic idea, please keep the BTA’s tentacles out of it. With Michelle there ‘facilitating’ it is probably already too late.

Would have been nice for some notice of this beforehand. I see a lot of bike businesses unrepresented and know of at least 4 that were not contacted. Very BTA like behavior from the get go.

steve – this effort was announced here on bikeportland some time ago. who was unrepresented/not contacted? i would have been there myself (on behalf of magpie messenger collective) had the meeting not been scheduled during working hours – but hopefully ill be able to get to the next one.

but man, one meeting, and youre already complaining? you sure have an itchy trigger finger. these things start small, and then BUILD, no thanks to people who are naysaying right off the bat.

You missed the part where I said it was a fantastic idea, joel. I love this idea. I hope that next we will start to see unionization of some type in the bicycle industry.

My concern, not complaint, is that this wonderful effort will be absorbed into the BTA as yet another revenue stream to be siphoned from.

I want to see this seed blossom, just not in the BTA’s tainted bed. No naysaying or complaining here.

steve – everything after “this is a fantastic idea” sure sounds like naysaying and complaining to me… but whatever.

im perfectly happy, as a bike-based business owner/partner, to see this blossom, whether its in the btas “tainted bed” or not.

Having participated in the meeting today, I can honestly say that the BTA’s Michelle P. did a fantastic job in helping to bring people together, organize and facilitate the session with professionalism, humor, and grace.

It was a productive meeting and a beautiful day.

Thank you Michelle and to everyone who participated — or wanted to but couldn’t make it.

Hope to see you all next week!

steve *please* stop with the hate… it’s getting old. Go ride or something.

Steve, keep up da good work! Glad to know I’m not the only muckraking village idiot out for personal glory and fame!

WHACKOS UNITED SHALL NEVER BE DIVIDED!!!!

Well, it is hard not to be the village idiot while amongst people who conflate contrary opinions with hate..

This seems fitting for ya Paul-

“When a true genius appears in the world, you may know him by this sign, that the dunces are all in confederacy against him.”

A person dubbing himself a genius is about as big a genius as a person saying ‘trust me’ is trustworthy.

The real genius is the one that did not understand a lesser man was dubbing Paul Tay a genius.

As a bike business myself: Metal Cowboy – I’d like to know when the next meeting is I can attend – I was off doing bike business during this first meeting so couldn’t attend – and I’d like to know more about the bike friendly biz alliance group forming as well. My feeling is we can
t have too much of this wondertiwn powers of the bike uniting for representation – and I love the priority of helping non biking biz do more by b8ike. This is how we seed the garden, grow the mode share and continue to shift of communities to a more human friendly way of life. Please post the next meetings and I’ll be there.

Rantings of a LUNATIC:
1) The ONLY really bad publicity is NO publicity;
2) Let’s roll, baby!
3) Pedalpaaaaaaaaaaaalozaaaaaaaaaaaaaaa, DAMMIT!

I’m maintaining an email list for this fledging Bike-Based Business Whatever (noone knows yet if it will be an Alliance, or a Workgroup, or an Association…) so if you’d like to get on it, let me know! In the future, though, I will probably not be the list administrator; a BBBW member will likely take that on.

We at The Green Microgym would be glad to offer a deal on access to our spin bikes for training for bike based businesses.