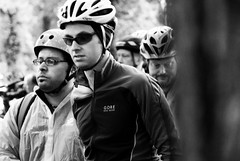 For the fourth year in a row, Portland will take part in the national Ride of Silence event. The local edition of this ride — which began in Texas in 2003 and has spread to hundreds of cities — will take place in Northeast Portland on May 20th.

The Ride of Silence is a silent, slow-paced ride to remember people that have been injured or killed on public roads while riding their bicycles. It will also take place in six other Oregon communities: Beaverton,
Bend, Corvallis, Eugene, Pendelton, and Salem.

Portland’s ride was put together by Northeast Portland resident Russ Willis. Unlike previous years — when the ride had police escorts and was sponsored and sanctioned by local advocacy groups — this year’s ride has no such formal organization behind it.

In a statement about the event, Willis writes that the intention of the ride is to:

“…raise awareness among motorists, police, and policymakers that the roads are to be shared safely by all users, and that bicycling is a legitimate form of transportation.”

This year, the Portland Ride of Silence will pass by the site of a hit-and-run that resulted in a serious brain injury for Eric Davidson and a 70 month prison sentence for Jeremy Jordan. At 2:44 a.m. on May 9th, 2008, Jordan drove out of a convenience store parking lot at a high rate of speed and struck Davidson while he rode his bike on NE Fremont near 69th. Davidson’s wife, Anna-Carin has kept up a blog about her experiences dealing with the tragedy.

Ride of Silence – Portland
May 20, 2009, 7:00 p.m.
Meet outside of BikeFarm at 305 NE Wygant St.
*Participants are encouraged to wear black armbands
RideOfSilence.org

“…raise awareness among motorists, police, and policymakers that the roads are to be shared safely by all users, and that bicycling is a legitimate form of transportation.”
Russ Willis

Without reference (except respect) to those whose injuries & loss have engendered this event, but rather addressing participants and organizers:

Will this ride become another opportunity for a [bike] cultural expression of disdain for the ORS (Oregon Revised Statutes) which legitimately govern the actions of all users of public roadways?

Small groups of racers out training on city streets (or sketchy bridge MUPs), Critical Mass, many bike ninjas (lightless, silent, dark-clothed evening riders who scoff at traffic controls and courtesy), even our wonderful Move-By-Bike tradition, all certainly “…raise awareness among motorists, police, and policymakers” about the presence of bikes. They also, however, often make a counter-statement about roads being “shared safely by all users, and that bicycling is a legitimate form of transportation.” I’m focused on the word “legitimate,” here.

If this is to be conducted like the average group ride, perhaps Mr. Willis should just stick to stating the intention of honoring the memory of bicyclists who have been victims in collisions. All that other rhetoric will be lost on the majority of non-participant (especially motorist, non-bicyclist) observers as soon as a straggly peloton begins to blow stops and signals en masse (without a parade permit, police escort, or some other official sanction for violating traffic rules to which everyone else is obligated).

I admit to not knowing how Mr. Willis intends to “shepherd” the ride (or even if there will be any guidance in that regard). It’s pretty frickin’ categorical though, that the ride will reach out & generate more somber sympathy for co-existence among motorists if it is conducted within the existing common framework for vehicle operation. It cannot simultaneously be a rolling collection of personal statements about the desire to see traffic law changed in respect to bicycle operation (expressed as protest by the willful violation of traffic control) and at the same time be a civil plea for respect & equality on the street between bikes and cars; at the very least, the intention of performing an act to honor the lost and injured among us will not get much farther than the hearts of the riders…

In the end, even if that last were the case (no material public persuasion), it would certainly be reason enough to ride – without the white-washing (justice-washing?).

[yeah, I write so slowly, all of these points have probably been posted or reposted-to already…]
Jene-Paul

As Jonathan knows, I have resisted the label “organizer.” While this is not “critical mass,” it is also not a sponsored ride.

As stated in the press release itself:

There will be no police escort, no SAG support, and no designated “sweep” riders. Each rider will be responsible for his or her own safety. Black arm bands are encouraged. We will be silent.

I have not sought a parade permit or police escort precisely because the point is to demonstrate a sharing of the road. There will be no formal “shepherding” of the ride, but I do intend to make a statement at the outset that it would be better not to cork intersections or to blow through stops, but instead to regroup after we get separated at lights.

Certainly nothing I have said should suggest to anyone that this ride has anything to do with violating existing traffic laws or expressing a desire to change those laws (except maybe strengthening the penalties imposed on inattentive motorists who injure or kill cyclists and pedestrians).

I have no idea what Refunk is referring to when he uses words like “whitewashing” and “justice-washing.”

It does happen that I do have problems with a couple of Oregon statutes regulating the operation of bicycles on public roadways, but these will not be the subject of this ride.

so again, I have no idea what Refunk is referring to.

Thank you for responding, Mr. Willis.

It happens that I agree with your point of confusion about the words, “white-washing” and “justice-washing,” inasmuch as I did not elaborate or edit there. I guess my point was that the idea of riding to call attention to the need for acceptance of bicycles as valid road-users might be defeated by scofflaws exhibiting personal style in place of adherence to traffic code. “Running stop signs is okay, because our cause is just!” sort of thing. So, I didn’t write that very well. And I don’t think I implied (nor intended to) that you were recommending lawless behavior but I’m sorry if it seemed that way.

If the purpose of the Ride of Silence is for the riders to remember cyclists lost and hurt, then it doesn’t matter much how it is executed by participants, regardless of behavior as traffic. If it is also intended to make a public statement demanding respect for bicyclists, then it becomes a matter of mutual respect which must also be expressed by bicyclists. The principle you have mentioned above, Mr. Willis, would express this well, to the extent that it could give no reason for offense to “precious motorists” and others observing the passing riders.

As for moves-by-bike, I love ’em and like to participate in ’em. The half dozen or so upon which I have ridden have never showed more than a cursory respect for traffic law, even if observing “the rules of the road” according to some bike-centric convention.

The latter is usually manifested in a few token riders maybe signaling or actually pausing at stops without cross-traffic present, etc., while the majority skip that kind of practice and cruise through controlled intersections (including both signed & signalized) in regal fashion as outrunners “cork” other traffic. The bike move is a great thing and I have always enjoyed the concept and action and have *never* lectured a goddamned soul about their riding – I’m nobody’s daddy there and never will crack on anybody else’s style on the street (until they run into me!) – but as this is a public forum, I’m squeaking up now.

The purpose of the bike move is to …well, move by bike. Never thought it was a grand gesture to the world (a message to cagers, etc.) so much as the collective action of those willing to put their muscles where their dogma is (cars are mostly dumb solutions to everyday need). Ride of Silence, however, seems addressed to the public, including those “precious motorists” with whom we share the city and our lives.

I’m just saying we have to show respect to get respect. Your clarification above, Russ, indicates that you understand this, even if it is not a particular focus of your communications about the RoS. Your additional statements also reflect respect for the ride as envisioned by the founding group back in Texas. I’m not trying to point out faults in yer helping the ride to happen this year so much as spouting off in general about practices which shoot us in the foot as cyclists when it comes to public discourse. I’m glad you have put the energy into the RoS and thank you for it.

Vancouver folks are meeting up at 6 PM in Esther Short park.

Thank you Portland for highlighting my husband’s devastating crash on NE Fremont. Sorry we couldn’t be there tonight; we really wanted to but it’s been one crazy day. We are deeply touched by your support.