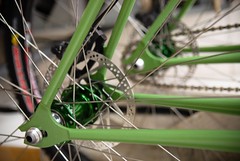 The City Club of Portland is set to host a special edition of their Friday Forums series entitled, “It’s All About the Bike”.

The City Club is a Portland institution that began nearly 100 years ago and whose members read like a who’s-who of social and political power brokers in the city. It’s where Mayor Sam Adams gave his first “State of the City” and it’s a common forum for Governors, statesmen, and titans of local industry.

On May 1st, all attention will turn to bicycles.

According to Friday Forum program coordinator Amy Harris, the idea to focus on bikes came from City Club executive director Charity Fain. Fain got the idea after she noticed a recent cover story in Oregon Business Magazine that touted Portland’s “Bicycle Industrial Complex”.

The event will consist of a panel discussion as well as an exhibition of locally made bicycles (Harris said having an exhibition at the Friday Forum is a first for City Club).

The current list of bike builders set to exhibit are:

Because of space constraints, each builder will bring just one bicycle to display.

Here are details on the event:

We need to shift the conversation from “bikes as a problem” to “bikes as a key part of the solution.”
Bike riders risk life and limb on today’s roadways while reducing congestion, increasing safety, reducing air and water pollution, reducing greenhouse gas emissions and improving health and liveability of our neighboroods.
It is time for bike riders to be honored and not harassed, even though we are having lots of fun!

Wow! Amy Harris, Jonathan Nicholas, Jay Graves, and Mia Birk. That’s a very impressive list. With big names like this it will definately be an intelligent discussion. I hope it goes well for all involved.