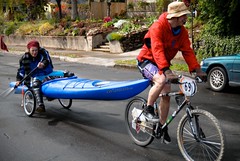 Weather need not be an impediment to the
well-prepared. (Photo © J. Maus)

It’s nearly the weekend — and I’ve heard rumors of sun as well as reports of thunder, lightning, and hail.

Last weekend’s rain and high winds didn’t keep everyone indoors — hopefully your errands, visits, and bike fun won’t be deterred by any kind of weather in the next few days either.

– Tonight bring your kids to a special Kidical Mass event. Join the BTA to ride to City Hall in support of Safe Routes to School funding. Leave from several locations at 5:30, or join the crew at 1221 SW 4th at 6:30.

– The huge, iconic Portland Farmers Market at PSU opens for the year on Saturday morning. Fresh fruit, veggies, and people-watching — I can think of no other Portland event where so many people invest so much effort into what they are wearing so early on a weekday morning. Deepak Saxena of Shift is leading a ride from Peninsula Park at 10am.

– For women who want to go on road rides, Bike Gallery hosts a free Sunday morning ride series, leaving at 9am from their Hollywood store at 5329 NE Sandy Blvd.

– On Sunday, check out weekly standbys Bike Polo (see Jonathan’s pics of their recent tournament for inspiration), and Zoobomb.

Chime in with other events, reports from your weekend, and variable-weather riding tips in the comments.

That looks like a fun way to use a canoe.

I’m looking forward to the Forest Park Day of Stewardship tomorrow…even though I might be a little hurtin’ after celebrating Froot Dawg’s b-day tonight. Beeer!

Gardening this weekend, digging a new vegetable bed and planting seeds.
Bike content: hauling the compost home on my Xtracycle as people stare at my load.

Wishing a very Happy Birthday to the one and only John Howe, Team Beer spokesmodel and beloved bike community friend. May the bikes, beer and best of teammate camaraderie continue to flow this weekend! We love you Froot Dawg!

A crew of bikes just came and planted my new street tree! Well, actually, the people ON the bikes planted the tree… I guess that’s what I should say. Friends of Trees planting day in my hood… a good thing! Thank you to all the biker-planters!

Thanks for giving us a place to plant some trees, LizardMama.

It was a blast to have my second bike tree planting crew experience. Today, there were two bike crews. Pretty sweet. Our planted about 20 trees.

Just got back from Seattle where I went for the Seattle Randonneurs’ 1st 200K of the season – 10 hours and 15 minutes of Mt. Rainier foothill heaven.

Did the Kidical Mass ride and rally on Friday.

here are my photos

PS the tree planters had some AWESOME bikes (a bunch of us bikey folks were passing by on Shawn’s Urban Adventure League walk and had to stop and gawk).

Managed to log 209 bike miles this weekend, my first 200+ weekend of the year.
A little rain in the middle of each day’s ride but both ends, both days, were dry. Only one 4×4 issue today, and it ended better than the previous situation.

Celebrated Baltimore’s first on-street bike parking (corral in Portland-speak). It’s smaller than some in Portland, but it’s a start.