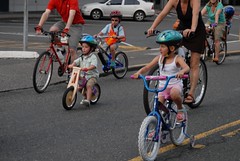 The Bicycle Transportation Alliance (BTA) plans to use their monthly “Kidical Mass” ride as way to send a clear message to City Council about their upcoming budget: Find more money for the city’s Safer Routes to Schools program.

Hoping it is seen as, “a show of force for the Portland City Council,” the BTA wants to bring attention to a 40% reduction in the Safe Routes program that’s currently being proposed by the City of Portland Bureau of Transportation. The 40% dip is the result of PBOT holding back “one-time” funds (given out from surpluses in the city’s General Fund) it has enjoyed over the past two years.

Safe Routes to Schools is a federally funded program and it comprises a major part of the BTA’s budget. The BTA — considered a national leader in the program — is under contract with the City of Portland (who gets the money from the Oregon Department of Transportation (ODOT)) to provide Safe Routes services and teach the curriculum to local schools. 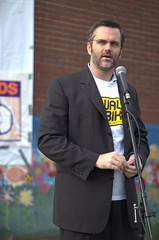 Adams, shown here at a
Walk and Bike to School
day event in 2006.

This August, the BTA will host the Safe Routes to School National Conference. How would it look to the rest of the country if Portland, nationally known for its Safe Routes program success, had to tell everyone at that conference that its program had been curtailed by 40%?

The BTA hopes that Mayor Adams keeps a promise he made during a recent speech to find the money for Safe Routes (although his staff has made it clear that there are no guarantees).

Mayor Adams will be under a lot of pressure to fund Safe Routes. Bike programs are popular enough on their own in Portland — add in the city’s stellar Safe Routes reputation and the cute kid factor, and suddenly you’re looking at a potentially sticky political situation. 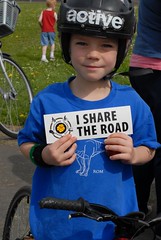 It’s tough to say no to kids.

When I asked PBOT Director Sue Keil about how her budget would impact Safe Routes, she said that “one-time” funds should never be spent on programs. Rather, they should only be spent on projects (that don’t need ongoing money to support).

In a statement about the Kidical Mass/Safe Routes to City Hall event, the BTA wrote:

“This is the time to grow, not shrink, our city’s active transportation investments. Your help is needed to restore the program to prior years’ levels!”

To clarify, the program reduction is a result of not just a loss of one-time funds – which was expected – but also of general transportation revenue – which was a surprise.

PBOT is incredibly resourceful and does a lot with very little; but with a double whammy like that, the Transportation Options group will be forced to do less.

Unless you don’t want them to do less, in which case, come have cocoa with us at City Hall!

Oh I’m going to burn for this one.

I view programs like this as nothing less than indoctrination. I also see on their website that some of the, “solutions”, this program offers is further congesting traffic, and taking punitive pot-shots at motorists, and in every way affecting thousands of people for the sake of a few.

Please note that I did not even come close to saying that children aren’t entitled to travel safely to school. I’m simply bristling at the use of this very sentiment as a smoke-screen to further an agenda. I’m not even saying this is the intent. Most religious (Yes I just called Green, and the Nanny State a religion!) people don’t realize what they are doing is wrong. Sorry, I couldn’t resist.

I say make the parents of children responsible for their childrens’ safety. You know, rather than you and me. It’s more fair, and just, like that.

Alright, dogpile on Vance! Oh, before you get mad at me, I’m just putting forth an opinion, and will gladly recant should a valid opposing opinion/argument be presented.

Vance, ditto. Kidical TERRORISM fo’ shure! I’m all for it. Sticking some stinky but cute kid with bad hair into some politician’s face works EVERYTIME.

Hee-hee. Hey thanks # P. Tay! I know. Yikes, I’m actually taking a negative stance on getting some snot-noses to school safe and sound. Some view me as contrarian (Why’s that not a word?). I like to think I have simply mastered counter-intuitive logic, and superfluous distinctions.

There are few things I hate seeing more than children being used for political purposes. Normally the context of this is from anti-abortion, anti-gay and hate filled churches forcing their kids to hold up signs while the parents say “Oh, think of the children”. Is this really any different? I am a supporter of Safe Routes intentions, but when it comes down to it, a restructuring of the program to organizing parents to take the lead via PTA meetings seems a lot more sustainable, financially and in the communities, than expecting the city to pay the BTA to take their kids to and from school. And quite frankly, does the BTA want to continue in the roll of being a bicycle advocacy group, or to become a branch of the city government?

Safe Routes is a program for which the BTA advocates all around the state – not just in Portland. We would oppose a cut in Safe Routes funding anywhere else in Oregon, but the big cut is – surprisingly – in Portland!

We contribute a small part of this program in Portland, and it’s a small part of what we do. If it goes away we’ll stop doing some work related to it, but that’s honestly not a big deal. The big deal is missing opportunities to get kids walking and biking safely early in their lives, and losing access to the 15-20% of morning drivers who are delivering their kids to school.

We think that Safe Routes has a lot to do with the increasingly safe biking conditions that Portlanders enjoy. Safe Routes and Transportation Options don’t just reach kids, they also reach thousands of parents and change THEIR driving and biking habits. This is good for everyone on the roads.

Without City support, Portland Public Schools and teachers just can’t keep this program going, no matter how important they think it is. We all know how overwhelmed schools and parents are. They need help from the City on this front.

Well, there’s always homeschool, or better yet, unschooling, to reduce the sense of “overwhelming” and burden on the public schools.

One of my best friends homeschooled all three of her kids. They rode their bikes everywhere — to the park, the library, and all sorts of events — independently and safely. That parent took it upon her self to teach her kids how to ride safely and now they’re young adults living independently — and car-free.

It can be done, and without a “program”.

hey we are a party of 4-5, no children, but we are kids in our hearts, we have some trailers and music, lights…good energy!!!!

Kids that size should be riding on the sidewalk and getting off their bike at intersections to walk across. They are way too young to be out in the street. If something were to happen to one of them they should hold the grownup in charge liable. They are too young to have good enough judgement of safety.

while biking everyday in Portland to and from the southwest and northeast, WE NEED MORE BIKE ROADS!!!!!!all the bike roads we can get, cars need to be slowed, especially in the city…. there is no hurry, this should not be about the kids, but for everyone, and it is…Don’t hate this.. we are all children and we need to feel safer from the motorists, take a look at the Netherlands, they have it figured out.