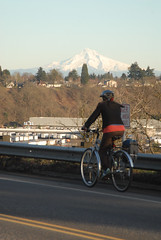 We had our first ever Get Together event in St. Johns tonight and I have to say — mission accomplished!

We had a nice turnout. Knowledge was shared. New connections were made. Beer, fries, tots, and burgers were consumed. All in all, a great way to kickoff this new series of events.

One thing I’m looking forward to with these events is riding in different neighborhoods. I haven’t ridden on N. Willamette Blvd. for a long time and, with a clear view of Mt. Hood, I picked a great night to head up there. (Unfortunately, my ride ended on a bad note when I encountered a major repaving project toward the northern end of the street. The city has torn up the middle of the roadway, leaving a very sharp curb to mount in order to stay in the shoulder/bike lane. Add the high speed of cars, buses, and lots of dust, and the idyllic N. Willamette experience on the bluff turns quickly unpleasant.)

After looking around for some bike parking (McMenamins could really improve in that department), I made my way into the St. Johns Pub and it didn’t take long for other folks to trickle in.

I liked the size of the crowd. It was large enough to feel like we really did something, yet small enough so that I knew everyone’s name (and could introduce them all to each other). 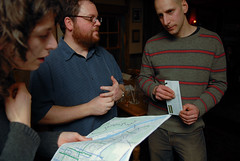 Greg Raisman, who’s helping PBOT with their bike boulevard effort, gave us a rundown of their thinking for good bike streets in North Portland. He poured over maps with several other folks and was excited to glean more local knowledge.

One of the people who gave Greg a bunch of input was Esther Harlow. She and Greg geeked out on a map of North Portland for at least a half-hour. 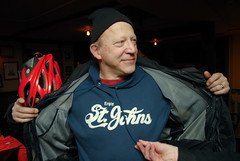 Another person who shared their North Portland knowledge with us was Joe Adamski. Joe (27 days from being a retiree — congrats Joe!) is a former board member of the St. Johns neighborhood association and he stays active in local issues. At the event tonight, he gave us an update on the bike corrals. He said there are two slated for downtown St. Johns; in front of the St. Johns Cinema at Lombard and Alta, and on N. Charleston at Lombard, adjacent to Weir’s Cyclery.

Adamski said the corrals are on order with PBOT, but since they’re still not officially adopted as a standard design, it may still be a while before they’re installed. 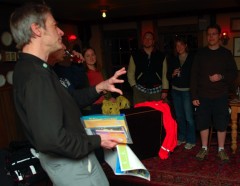 Timo Forsberg told us about
the SmartTrips program.

Never missing an opportunity to give away free maps, Timo Forsberg with PBOT’s Transportation Options Division joined us as well. Timo gave everyone a rundown on their SmartTrips program and said this coming spring and summer they’ll send a mailer to 28,000 households in St. Johns and North Portland. The mailer will include a request form for a bunch of great free stuff (you can get various goodies including Metro’s excellent Walk There! book) and will include information on the rides and special events that will be part of the campaign.

Daniel Fleischer doesn’t live in St. Johns (he’s from Sabin in Northeast Portland), but he came because he does a lot of business in the area (he’s a real estate agent). Fleischer also likes to ride his mountain bike near the Superfund site below the University of Portland. He was disappointed to realize that, due to a recent purchase of the property by U of P, a chain link fence has gone up and he worries that public access will soon be restricted. 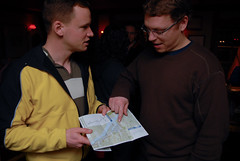 One of many pleasant surprises of the evening was running into Joe Lontai (the guy from Iraq, remember?). Joe is an ROTC instructor at University of Portland and he came to tell us how many U of P students would love to ride downtown, but they’re afraid to do so because the route is dangerous.

The safety (or lack of it) of the north-south connection to downtown from St. Johns was a big topic of conversation. PBOT is focused on creating new, bike-friendly routes, but the bottom line is that N. Interstate and N. Greeley, and the truck traffic from Swan Island (two people mentioned UPS trucks specifically), make the connection uncomfortable for many.

Lots of great information and connections were made tonight. I know there was a lot more I didn’t mention, so feel free to add to this report in the comments below.

Thanks to everyone for making this event work (and special thanks to our events coordinator/volunteer Brad Nelson and of course managing editor of this show Elly Blue).

I can’t wait for our next Get Together…we’ll be coming to Southwest Portland at the end of this month.

So wanted to make this get together but parenting and work issues prevented. Sounds like it was a great time. I know exactly what you are talking about with the Willamette blvd repaving project. I was cruising along the other morning, then was death gripping the handlebars. Hopefully it will be done soon. Riding Willamette is one of my family’s biggest quality of life positives of NoPo living.

When you get around to SE, you should probably pick a pretty spacious place. *lol* Soooo many people on bikes in SE.

I am so sorry I missed it!!! Biking and St Johns are both so important to me, and the event combining them had to be on a Tuesday. Oh well. I am all about a safe route to downtown! I’ve done Interstate and Greeley and they are just not worth it at 6am.

Re: Willamette Blvd, it’s not just bikes hurting either. A woman getting off the bus yesterday tripped over that sharp curb and sprained her ankle pretty badly. The bus waited while she borrowed a phone to call for a family member to come pick her up!

That was a lot of fun — thanks to everyone who came out. It’s always interesting to explore a new part of town and meet new folks.

On the way out I discovered that my helmet — which I’ve been leaving hooked over my bike handlebars for years without mishap — had been stolen. The BikePortland curse continues…

….and thanks to Jonathan for making it happen and for personally shelling out $ for beer and fries.

Sounds like you had a lot of fun… Sorry I had to miss it. (Conflict with the Beaverton BAC meeting).

Thanks for putting this together Elly, Jonathan and Dan. It was great to hear about what Scott Mizee, Joe, Greg and Timo have been up to with the Greenway, the bike corrals, the bike boulevards, and all the free stuff we’re gonna get from SmartTrips 😉

I’m glad you brought up the major north-south connection issue.
It was nice to meet Cara, who lives close to me in St. Johns and seems to be in a similar demographic, but chooses a completely different route to downtown (Willamette–>Ainsworth–>Van/Williams) from mine (Willamette–>Greeley–>Interstate) based on the safety and security issue (I choose mine for speed and shorter distance). This connection not only impacts our access to downtown but to inner SE and NE. Of course, the Greenway would solve lots of these issues, but…that’s down the line.

I think the other big issue that was discussed is the lack of crossings over the railroad, east-west, into and out of St. Johns. The only three (except Columbia, which almost no one takes except freight traffic) are Willamette, Lombard, and Fessenden, but they are the main access for cars as well, and Lombard currently lacks a bike lane. So unlike other routes around town, there aren’t parallel quieter residential streets nearby that bicyclists can choose as alternatives. Someone compared it trying to get across I-84 into Sullivan’s Gulch.

As for Willamette, I usually tell people to avoid it between the railroad and “downtown” due to the narrowness, high speed and lack of bike lanes. Jersey, 3-4 blocks over, is almost always the better option as it isn’t out of your way if you’re headed to the commerce district/”downtown” St. Johns.

thanks for that recap Esther (I fixed the spelling of your name).

We’re so glad you showed up. I appreciate your recap of some of the issues facing St. Johns. Hope you don’t mind us keeping in touch with you as one of our St. Johns operatives in the future ;-).

It was a pleasure seeing everyone there last night. St Johns has some challenges and some great possibilities, and I was happy to meet and hear from so many of my neighbors about what works and doesn’t work for them in SJ. An added benefit from the meetup is identifying folks who care enough to take things to the next step, advocating for postitive bike changes.

Bike corrals and Boulevards are important. Building those relationships to affect positive change are too. Thanks for hosting this event, and hopefully every neighborhood will have a cadre of connected and engaged advocates.

Hi All,
I live in St. John’s, am a regular bike commuter to beaverton, and am truly sorry I wasn’t able to make this event. I agree, access in / out of St.John’s is pretty limited now unless you feel comfortable riding alongside fast moving cars, and in some cases, riding with traffic.
I think Willamette is by far the best way, although, on my commute (almost daily) into downtown, I’ll go out of my way to Vancouver st. to avoid the traffic on Greely (yes, the truck traffic is h3ll) or interstate. Willamette is pretty bad these days though due to plenty of debris and a couple of small construction projects that have left some pretty rough pavement in a few areas. One question, why are they re-paving the roadway, and not addressing the bike lanes? There are pleny of improvements to dips, and especially a few sewer grates that need to happen. Not just the roadway itself needs attention.
Lombard is going to have to be improved and re-painted at some point too. Would be great to see bike lanes go in on that street.
Another question, being one that travels to the west side of the ridge. Has there ever been any talk of getting bike lanes painted in / installed on the uphill directions of Germantown or Thomson? Maybe even Newberry? Sure, they are big climbs, but they are legitimate avenues over the hill for us commuters. Right now, they are far too dangerous during peak commute times.
Thanks for bringing some attention to St.John’s and look forward to hearing updates on the corrals and seeing more bikers up here in the near future!!

Sorry to hear about the helmet, Elly.

Sorry I missed this…