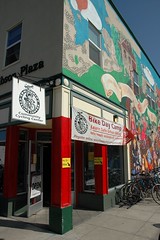 The Bikes Belong Foundation has awarded the Northeast Portland based Community Cycling Center (CCC) a $10,000 grant.

The grant has been made through Bikes Belong’s Paul David Clark Best Practices Grants program. That program — which was established in honor of avid cyclist Paul Clark who was killed by a vehicle while riding his bike in 2005 — makes awards to “exemplary organizations that are supporting their communities through bicycling, establishing innovative bike programs for young riders, and setting—and raising—the bicycle-advocacy bar.”

In an email to their members sent out this morning, Bikes Belong said the CCC is a,

“stellar model for established and aspiring bike-advocacy groups that are working to create and enhance community bike programs across the country.

Additionally, the group’s research and collaboration with the Portland-based Initiative for Bicycle and Pedestrian Innovation helps to establish best practices in bicycle commuting—particularly with regard to low-income and minority populations.”

The CCC joins some very esteemed company with this award. The three other $10,000 grant winners announced this morning included the non-profit Transportation Alternatives in New York City, the NorCal High School Mountain Bike League in California, and the innovative Freiker program in Boulder Colorado.

What will they do with all that money?

Maybe the zoobombers are looking to sell their new sculpture and buy health insurance instead.

Way to go CCC staff! You deserve it. Cheers, Janis

in the current funding environment this is a great accomplishment…way to go CCC!

Good job CCC! This is a tough funding climate and even a medium sized gift can make a huge difference to a non-profit.

Keep up the good work CCC!

It’s nice to hear something positive like this, especially these days, here in Portland!

I love alot of the programs the CCC runs, but they also are taking literally TONS of donated bicycles and selling them to scrappers to be melted down. These bikes could be put back into the community in a large number of ways.

Anon has no idea what he/she is talking about. In no way, shape or form is the CCC scrapping “tons” of bikes. That’s just laughable. They do just the opposite, taking tons of broken, unused, unwanted bikes and restoring them to usable condition for the community to enjoy.

A good portion of the bikes that are donated DO get scrapped. That’s what the huge metal dumpster out back is for. If the bike is in such poor condition that repairing it would be cost ineffective- it gets recycled. A lot of the donations fall into that category. It’s a nice idea that every donated bike finds a home, but it’s not a practical reality. In the past, the CCC opened their dumpster/ recycling bin to the public to sort through- but that no longer happens.

In the time I’ve spent at the CCC I have not seen any even remotely usable part go into the dumpster. If they closed the dumpster to picking, it was before my time, but I would guess that there were issues with messes and liability that the CCC doesn’t have the resources to deal with. If you need a used bike part, just go in the shop and BUY one, it’s for a good cause. If you need old stuff for an art project or whatever, I’m sure simply asking an employee for a dead wheel or tube or whatever it is you want would work.