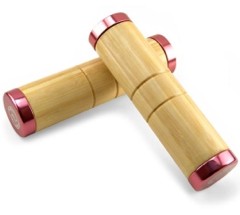 Portland Design Works has been busy since we broke word of their arrival back in September. Erik Olson, the former Planet Bike GM who moved from Wisconsin to Portland to launch the company, has now joined forces with former Planet Bike co-worker, Dan Powell.

Powell and Olson have finalized their initial line of products (grips and inflation accessories), launched their website, and moved into a new office in Southeast Portland.

“You’d start a surf company near great waves…we moved to Portland because its bike-friendly culture. We wanted to design and test our gear in that great urban cycling atmosphere.”
–Dan Powell

The duo have also announced that, while the bulk of their product will be sold through traditional distribution channels, they’ll sell direct to Portland shops and deliver local orders by bike (a bakfiets is in the plans, but Powell says they’ll use a trailer/front-rack set-up for now).

“We want to be a part of the community, to have a connection,” says Olson about the bike delivery plan, “plus, making deliveries by bike is a great excuse to get out and ride.”

I got an email from Dan Powell this morning. He said for the last few weeks and well in February, they’ll be going “shop-to-shop” in Portland to introduce themselves, ask what products people would like to see in their line, and get feedback on new product samples. 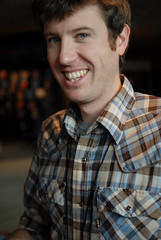 In a press release sent out to the bike industry, Portland Design Works describes themselves as a “new brand of urban bicycle accessories with a focus on simple, beautiful design.” Their first products — which will be in stores by the end of next month — are grips and inflation accessories. Coming in spring will be a line of cargo racks, tools, mini-pumps and fenders.

Olson gave a preview of those products at the Oregon Manifest bike show back in October (note copious use of bamboo): 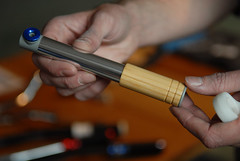 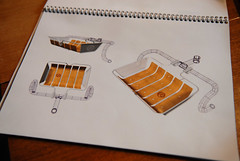 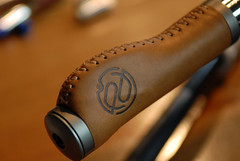 Midwest natives Olson and Powell say this venture, and living in Portland, is a “dream come true”. And, if you ever doubted that Portland’s bike mystique has real economic impact. Consider this. When asked why they chose to start the company here, Erik Olson said,

“You’d start a surf company near great waves, or a wind farm on an enormous plain. Likewise, we moved to Portland because its bike-friendly culture… We wanted to design and test our gear in that great urban cycling atmosphere.”

PDW hopes to have their goods available nationwide by summer. Check out RidePDW.com for more info.

Alright! Some slick-ass bamboo grips to go with my shiny Co2 dispenser! Ironic juxtaposition or just moths to the flame?

MZD-43-
If you are refering to the top picture, that is a hand pump, not a CO2 dispenser.

This is great news not only for the cycling community, but for Portland manufacturing business sector in general.

I’ve been employed as a machinist and tool and die maker for over thirty years, and witnessed the near death of hands-on manufacturing across the board. These businesses — similar to Chris King — are at minimum keeping a detectable pulse in the manufacturing sector. And we couldn’t ask for a better application.

Again, perhaps like King’s products, it appears this new business’ niche is making a class A, beautiful and reliable product, not just another containter full of offshore stuff unloading on a dock.

If I am not mistaken, this is offshore stuff being off loaded on a dock; much like “local” companies Showers Pass and Nutcase helmets. Please correct me if I am wrong.
Fact is, offshore stuff can be really well done, often better than onshore, and at a fraction of the price. Who wants to pay $300 for a handpump or $150 for grips, especially if the quality is not as good as a Chinese version? Designed here and manufactured here are not one in the same.

As much as I’m a fan of Made in the USA and the great products made by US manufacturers, I’ll have to agree with Mike in that I won’t/can’t pay high prices just for those same great products if international competition provides similar/better products at a fraction of the cost.

Erik from PDW here. Just wanted to let you know that you can feel free to email me if you have any questions about our products, manufacturing, or beer preferences.

Erik from PDW here. Just wanted to let you know that you can feel free to email me if you have any questions about our products, manufacturing, or beer preferences.

Sorry, forgot to include my email address: erik@ridepdw.com

Erik-
Welcome, congratulations and best of luck!
The pump looks awesome, as does the road bike HB rack. I am looking forward to the new items.

And for what it is worth, I own lots of King product as well as locally made frames. I am an equal opportunity consumer showing the whole world my love (via the dollar).

Can’t wait to see some of this stuff in person, better yet, on my own bikes.

A few years ago, I had the opportunity (business) to visit one of the plants in China. Indeed, the quality of “offshore” products is equal if not better than locally made products. However, what I saw there weren’t acceptable working conditions. Therefore, the price of our so-called “cheap” stuff comes at a price, afterall.

Arguments will endure into infinity regarding such. Let’s all work as baristas and call it a day.

That’s why it’s all about Taiwan. Great working conditions and pay. Weekends off, new year’s bonuses, health care, the whole 9 yards. In China it depends on who owns the factory. If it’s Chinese… maybe not so good.

Hi, Mike
The top photo is clearly captioned PDW’s “Panda Treat” grips. They sound yummy for vegetarian bears, so I decided to check the web-site. I got the impression that the other initial product offering is a “shiny-thingy” Co2 opener. Don’t get me wrong. Welcome to Portland,PDW! I’m in the bike biz,too. The pump (3 pictures from “the top”) looks sweet and I’m looking forward to test-stroking one soon. The stitched kangaroo-skin grips look nice too.

Why not just have it made in Oregon?

You are already portraying it as an Oregon product, right?

Looks to me like just someone else jumping on the Portland Bike band wagon while encouraging unfit working conditions overseas at the same time.

I will choose to support actual Oregon and USA made products over these anyday…..

Bamboo grips? Maybe for your over priced, chinese made bakefits copy…

Pretty much goes against the whole idea of grips if you ask me.

Do you drink Stumptown coffee? I do, even though all of their beans are imported. It sounds like these products are being made in Taiwan, a country with a per capita GDP of over $30,000 (slightly higher than Spain and Italy) and similar working conditions to those in the USA. It sounds like you are a little misinformed about Asia and trade in general.

A comment above by a poster(#11) states that he was at these facilities.

He also makes a statement about the working conditions there.

It is also the case that when you add the price of importing products, it would certainly be a cost effective, and purely logical move to have your products made in the good ole U S of A.

Especially if your company is going to be called Portland Design Works.

In fact , it is proven that people will pay even more for products made in America.

As far as affordability goes . . . the only tangible reasons for anything lacking affordability are often CEO’s and other management types insisting on skimming the cream, and inflating their profit margins and salaries.

Remember the Russian proverb: “The Fish Rots From the Head Back.” Global Partners and other such corporate jargon is a euphamism for greed.

Beyond the human side of manufacturing is the environmental costs associated. Producing any hard goods typically produces waste. Here in the States, wastes are regulated, and such handling and appropriate disposal costs are passed along to the consumer.

I’d be speculating how offshore companies dispose of their toxic waste, but I’m guessing their standards are indeed relaxed by U.S. standards.

1974: I worked for a manufacturing firm in the midwest and we routinely dumped sulphur-chlorinated cutting fluids into the ground; it eventually polluted a nearby public water source.

1987: I worked for a company in Spokane that dumped acetone into a landfill. Can’t do that, and they got caught, and fined.

Offshore, and Mexico outsourcing often is “cheap” by virute of them being able to routinely dump their toxic effluents wherever they please.

I too enjoy my cheap “stuff,” but remind myself when I paste a save-the-earth bumper sticker on my Subaru Outback that my backyard stretches far beyond my political or geographical perimeters.