Welcome to Part Three of our six-part, guest article series on bike sharing in Portland.

The series is written by Tom Miller, chief of staff for Portland City Commissioner and Mayor-elect Sam Adams. Yesterday, Tom shared his initial impressions on bike sharing systems from a recent trip to Scandinavia.

In today’s article, Tom shares what he learned when a delegation of Portlanders (including Mayor-elect Adams) tried to navigate through Clear Channel’s bike share system in Stockholm, Sweden. 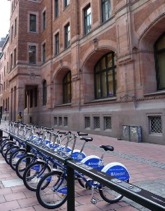 There was a station right
outside our hotel.
(Photos: Tom Miller)

We set out on June 21, the national Mid-Summer holiday in Sweden, thankful to have a day off from the formal tour circuit. We hit our first logistical challenge right away: you can’t buy access to a bike at a station with cash, debit, or credit. Instead, you need a specific card, sold at just three locations in all of downtown Stockholm. Sam (Adams) and a group set off to find the nearest location. It took them more than an hour. Since we had the day off and really wanted to ride the bikes, we endured.

In the meantime, all of the bikes in front of our hotel had been taken. When Sam’s group returned, we trekked off to the next closest station, a few blocks away. Our group was big and it was clear we were going to take all of the existing bikes at this station. Just as one in our group was about to select the last remaining bike, I noticed that the chain had fallen off. 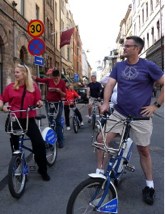 Your future Mayor wondering
which way to go.

“Hold up! Don’t choose that bike!” All the bikes have beefy chain guards, which are great for keeping your pants out of the grease and out of the sprocket. But how do you put a chain back on under one of those chain guards when you’re just a casual user traveling without tools?

So we ended up short one bike. What would we do? I looked at the map provided; it showed 64 bike stations citywide with no detail getting you to the exact location. There’s no scale provided so I’d guess that the scale gets you within one square half-mile of the actual station.

I eventually set off on one bike in search of the next closest station. Again, as a tourist riding a bike on a beautiful day, I was happy to wander. But what would my patience be like under the stress of a normal work day? Note to self, I thought: if Portland does bike share, we need maps that work. 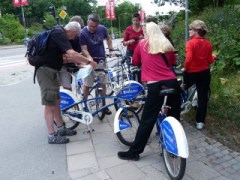 It took me 20 minutes to find that station and grab a second bike. I rode one bike back to the original station while balancing the other, earning lots of curious looks on that busy street adjacent to the central train station in downtown Stockholm.

Okay, finally we were on bikes and heading out. It was awesome. Stockholm is a spectacular city and riding a bike on the longest day of the year, a national holiday with low traffic, was pure joy.

Sam was in the lead and noticed a cool restaurant down on the water. He encouraged a stop to take in the environment and refuel. It was a great idea we all endorsed.

Question? How do we lock these bikes? Answer: we don’t. There are no locks. We have two choices: hunt down the closest bike station and hope there will be a sufficient number of bikes for us when we return, or watch the bikes closely as we try to enjoy ourselves at this spot. Given the challenge in getting bikes in the first place, we parked the bikes as close as we could to where we were sitting. 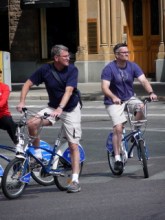 It took the manager just a minute or two to decide he didn’t like our choice in bike parking locations. We moved the bikes to accommodate him, of course, but we put them further away and therefore at greater risk of being stolen. The reality was that if anybody wanted to steal our bikes—which you purchase until you return them—it would have been easy to do so. We took a chance.

Fortunately karma was on our side. We got back on and decided we wanted to focus on the ride for awhile. It was great. We lost ourselves, literally and figuratively, for an hour or so until we realized our time was lapsing and we needed to return our bikes to a station. Although we had purchased cards good for multiple days, the system still required that we return the bikes every three hours or be given a strike. If you get three strikes you are banned from using the system.

“We got back to our hotel, exhilarated from our explorations of a great city by bike, but well armed with insight into the bewildering range of logistical hurdles necessary to provide a great bike share system.”

We darted off with our marginally useful maps to find a station so we could return our bikes. Of course, it was our intention to return the bikes then immediately retrieve them. We laughed at the ridiculousness of the situation. We were feeling stressed with poor maps and an arbitrary deadline to find a station to return bikes that we were only going to retrieve the moment the system had them logged back in.

We didn’t see our use as particularly atypical: we were tourists by bike for the day. And we had bought cards that were good for multiple days. Nonetheless the system requires the return of the bikes every three hours without exception.

After we completed our bike shuffle dance to appease the technology we jumped back on and rode without aim for a few hours. More bliss. What a great way to see a beautiful city on a gorgeous day.

Again we got lost. We debated our location with the maps until we sheepishly asked a local a simple yet uniquely important question: where are we?

It turns out he was from Great Britain but he got us pointed in the right direction. We got back to our hotel, exhilarated from our explorations of a great city by bike, but well armed with insight into the bewildering range of logistical hurdles necessary to provide a great bike share system.

Next up, Part Four: What’s at stake for Portland

Seems like rear frame locks on the bikes would at least give a decent level of security for them, as then a person would actually have to carry the bike away, and you could potentially park them in places where there wasn’t a readily available rack to lock them to (which is fairly common in Portland still). The AXA Defender locks that Clever Cycles sells also have an optional cable lock attachment which could then be looped around a rack to make even more sure that someone wouldn’t walk away with it. Between the two, I think it would be pretty secure, and pretty containable on the bike itself.

Tom, you mentioned there not being enough bikes at the station… do you think there is a possibility that a station might run out of space for riders returning bikes?

Call-A-Bike style programs don’t have the problems that the rack release systems you experienced. When your done, you just call it off rent, lock it and leave it. The system that LibraryBikes.org proposed for Portland was the Call-A-Bike style, yet it had another benefit, a central Bike Hub for all services regarding the public bikes. And the costs were half that of a Clear Channel system.

The Librarybikes.org proposal used the original french “Roue Libre” bikes from Paris, which the Jupiter Hotel in Portland has secured a small fleet of. They have said these bikes just keep on working and have had constant use for a whole season. A watchful eye over the bikes helps too.

Too bad you didn’t get to Paris to try the “Roue Libre” bikes.