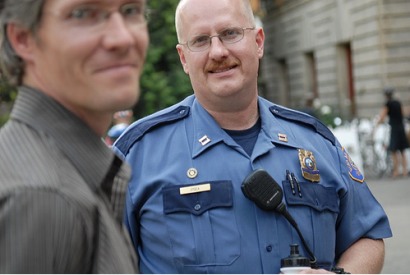 Larry O’Dea, Captain of the Portland Police Bureau’s Traffic Division, announced in an email yesterday that he has been promoted to Assistant Chief. O’Dea will begin his new assignment working with Chief Rosie Sizer effective next Thursday and current Lieutenant Bryan Parman will be the acting Captain until a replacement is named.

“When a replacement captain is selected, it will be someone that… will continue to support the city’s multi-modal transportation vision and recognizes our role in helping to achieve it.”
— outgoing Captain Larry O’Dea

O’Dea has been at the Traffic Division for less than a year. Back in January, he and Lieutenant Bryan Parman replaced former Captain Vince Jarmer and former Lieutenant Mark Kruger.

The Traffic Division is the most important part of the Bureau for bike-related issues. They write 80% of traffic tickets, they conduct targeted enforcement actions, investigate bike crashes, they escort bike parades, and generally have a lot of contact with the community.

O’Dea’s departure after such a short tenure, continues a troubling trend at the Traffic Division. Once a replacement is named, it will be the sixth leader of the division in just over three years. This rotating door brings with it differing leadership styles and enforcement philosophies which can make it difficult for the community, advocates, and traffic safety staff at PDOT to maintain momentum and build lasting relationships and programs.

Thankfully, showing the communication and leadership skills that made him such an effective captain, O’Dea addressed that concern in his statement (something I haven’t seen any other outgoing captain do):

I know in the past that there has been a problem during command changes at the Traffic Division with momentum lost in projects and differing philosophies emerging. I want to reassure you that this won’t happen with this change. We have made great progress in the last year and we are committed to continuing on in the positive and collaborative direction we have started. 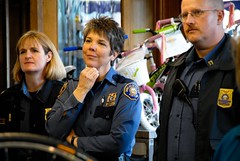 Having someone like O’Dea as Assistant Chief is exciting for our city, but it’s bittersweet for those of us who worked with O’Dea.

At Traffic, he (and Lt. Parman) ushered in a new era of cooperation and collaboration. They calmed a storm of acrimony that existed between the Traffic Division and the community following three tumultuous months of outcry after our tragedies last October.

O’Dea and Parman were very well-liked in the community and they showed a commitment to improving traffic safety and a sincerity in forging productive relationships that I haven’t experienced since I’ve been covering the bureau.

Under O’Dea’s watch, the Traffic Division has made huge strides in our community. O’Dea spearheaded a bike law working group that has created a Community Policing Agreement and either he and/or Parman attend monthly PDOT Bicycle Advisory Committee meetings (even when there’s nothing about cops on the agenda). O’Dea also decided to bring back the free bike light program that was dropped by his predecessor. Also during O’Dea’s tenure, Officer Robert Pickett (a regular commenter and contributor on BikePortland.org) assumed the role of official liaison to the community on bike issues. Just a few weeks after O’Dea came to the Traffic Division, Chief Sizer instituted a new directive that lowered the injury threshold for crash investigations for vulnerable roadway users.

Those are just some examples of the important progress that has been made in the past year.

Now, our thoughts turn to O’Dea’s replacement. Hopefully, the leadership style pendulum doesn’t swing too far and leave us back at square one. Luckily, again, this concern is already on O’Dea’s radar. In his statement, he wrote that when a replacement captain is selected, it will be someone that he, the Chief, and Lieutenant Parman, “believe will continue to support the city’s multi-modal transportation vision and recognizes our role in helping to achieve it.”

If you look objectively at the steps PPB is taking (not just talking about, but actually delivering), it’s astonishing. Randy, I think it’s rude to just dismiss so much good work on the part of PPB and the bicycle community.

I sincerely hope that the next Traffic Captain is someone who understands that traffic in this city is not just cars.

not a huge fan of policing or police states in general, but i can say that O’Dea and Picket have done their jobs with respect and consideration as far as I’ve seen, and for that they deserve some credit. Hopefully the next in line will be just as good. but, really, i don’t think anyone could be worse than Kruger…

I am simply objecting to the position being used as a stepping stone for promotions within the police bureau, one that as a result has very little stability, which allows the line officers in the traffic division to essentially do as they please, which unfortunately still includes routine harassment and belittling of cyclists needs and concerns.

I also think it was a big mistake for Adams to appoint Salzman to head the police bureau, the cops are gonna walk all over him.

We’ve still got a long way to go and these two moves are not in the right direction, IMO.

BURR (#4) – agreed on both counts. Randy Leonard was the natural choice. We’ll see what happens after the transition.

Portland Police as an institution have come a long way in the last year, but they have a long way to go. There are a great number of fantastic officers out there on the street, but there’s still plenty of bad apples on the force, who don’t understand the responsibilities of their position or plain don’t care. The culture of law enforcement makes it difficult to root them out – officers feel a duty to support each other and “gloss over” minor infractions, even when patterns of abuse of authority emerge, because these men and women literally depend on each other for their lives. You back up your fellow officers because you have to have absolute trust that you have each others’ back. This makes it difficult to get at the real problem people and have them removed.

The perpetual understaffing of police doesn’t help the situation, and unfortunately there aren’t any simple solutions.

I hope that O’Dea’s replacement turns out to be a competent, proactive person who continues building bridges with the community, and I hope that the PPB starts making that position a 3-year spot. I appreciate the fact that worthy people should be promoted, but the very nature of police service argues that the needs of the community are as important as the needs of the individual – and what the community needs from our police is stability, consistency, responsiveness and integrity.

PPB is making great strides right now for the most part, and I hope they continue that.

I have really enjoyed working with both Captain O’Dea and Lieutenant Parman on bike enforcement issues. While I’m sorry that O’Dea will no longer be Traffic Commander, I am happy that an officer and leader I respect is being moved up in the bureau, and I’m also very happy to work with Parman now as he takes over command of the traffic division.

As for the Traffic Division being a “stepping stone” or unpopular, I hope that is not the case: in part because I’m a traffic nerd and I find this stuff fascinating, and in part because traffic is one of the top causes of death in America and therefore deserves concentrated, serious, innovative attention from the Police and other agencies.

I’m sorry to hear this. Having someone in the position for a minimum of 3 years would be a really good thing. I hope Chief Sizer gives that some serious consideration.

Solid Gold #3, if you “don’t think anyone could be worse than Kruger”, you are mistaken. Kruger is an insensitive pinhead, and at times almost appeared to have a malicious intent, but you do not have too look very hard to find police that are worse, a lot worse. A screaming nightmare worse.

Vote Up0Vote Down  Reply
« “This is just pathetic”; a bereaved mom says enough is enough
Your guide to the wool revolution »