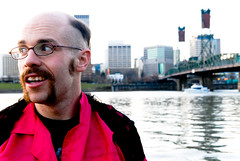 Portland’s resident bike pornographer is at it again.

Both films made their debuts during Shift’s annual Pedalpalooza event (in 2007 and 2008 respectively) and now Reverend Phil has taken it upon himself to help keep that momentum rolling with a farewell screening this Thursday (10/2) at the Hollywood Theater (4122 NE Sandy Blvd.).

Following the screening, a crew of sexy cyclists (including the Reverend) will tour across the western United States. The plan is to show the movies, meet up with other like minded bikers, and help to make cycling fun in their cities. Phil says they also plan to take in some of the world’s finest mountain biking in Moab, Durango, and Tuscon (among others). 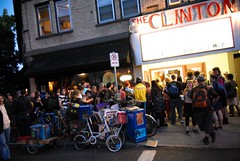 The tour schedule has just been released. Phil says, “If you know of cyclists who are as comfortable with sexual topics as they are with biking encourage them to come to one of the screenings.”

And in case you’re wondering, there are no DVDs of the movies available for sale and the program is not likely to be shown again.

This Thursday is going to be a pretty special night. Portland is fortunate to have venues like the Hollywood Theater and the Clinton St Theater that support truly independent cinema (not just limited release movies produced by major movie houses).

and Tuscon during the All Soul’s Procession: http://www.allsoulsprocession.org/

as well as being able to ride in Critical Mass in Austin on Halloween and San Francisco on Black Friday.

I appreciate all the love and support we have received from the Northwest. We have a beautiful thing here. But we shalt just sit back on our hunches with pride. It is important to share and learn from our neighbors.

Our mandate is to share that velo love until it burns (then add lube).

Great stuff!! About that place, “Tuscon”…is that in “Arinoza”, or some such place?