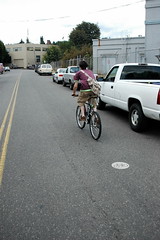 The stretch of SE Clinton
where the incident occurred.
(Photo © J. Maus)

Johnny Eschweiler, the man who intentionally drove his car into Ben Ramsdell as he biked down SE Clinton Street nearly one year ago, has entered a plea of not guilty by reason of insanity.

Escweiler was initially charged with three counts of Assault in the incident, but Multnomah County Deputy District Attorney Kirsten Snowden re-indicted him back in May and added two counts of Attempted Murder (after hitting Ramsdell, Eschweiler struck a second man on a bike) .

According to (the victim) Ben Ramsdell’s attorney Mark Ginsberg, Eschweiler has plead insanity to all counts. A new trial date is expected to be set for October or November.

yeah – well, we\’d be insane to let him behind the wheel of a car again. let\’s hope cooler heads prevail at the trial.

The insanity defense has always sort of confused me. Like, if you\’re a serial killer, doesn\’t that alone pretty much fit the definition of insanity? Do you even need to have a trial?

Do sane people try to run over other people with their cars? Is \”road rage\” a form of temporary insanity?

My view of insanity pleas are; Fine, you can wear a straight jacket while you\’re swinging from the rope.

Not making light of those with serious mental illnesses, just saying it doesn\’t excuse their actions or absolve their responsibilities.

As an aside: Shouldn\’t it be attempted murder in the heading?

Unfortunately, the legal definition of insanity bears very little resemblance to any criteria used to diagnose mental illness. To meet the legal definition, you have to be (as determined by people untrained in mental health) not capable of appreciating the consequences of your actions.

Psychologists (I\’m one) and psychiatrists don\’t even use the term \”insane\” or \”insanity\” any longer. Mental illnesses are diagnosed using a set of behavioral criteria. One diagnosis, antisocial personality disorder (your classic \”psychopath or \”sociopath\”), employs as a central characteristic a lack of concern or regard for the suffering of others.

I suppose Escweiler will find a clinician to testify that he\’s a psychopath. As you say, duh.

Hopefully, we will have a speedy civil commitment proceeding if he is found not guilty by reason of insanity.

Without much detailed knowledge of Escweiler\’s mental health, I can tell you that insanity is pretty difficult to prove to a jury and survey research shows that the public believes it is much easier to \”get off\” of a criminal charge on this basis than it really is.

Is his defense attorney named in the article, Mark Ginsberg, the same \”cycling\” attorney???

According to the article, Ginsberg is not the defense attorney, he is the attorney for one of the victims, Ben Ramsdell.

Did he realize he was insane before or after the additional attempted murder charges were levied?

a.O – \”To meet the legal definition, you have to be … not capable of appreciating the consequences of your actions.\”

That sums up just about every incident involving a driver using their car against a bike… Most people don\’t get the physics of 2,000lb car vs. 200lb bike+rider and can\’t appreciate the consequences of the two colliding. So I guess that means most drivers are legally insane? Sweet.

The defense attorney is obligated to present the best defense strategy available. That, to me, doesn\’t mean the strategy holds any water.

It does, however, make me reflect on the fact that I share the roads with drivers, pedestrians, riders, train engineers and the like who all on any day can present with any range of stability or affliction.

This is definitely a case of the \”twinkie defense\”.. hopefully we\’re beyond the days of accepting such excuses for people\’s bad behavior.

Comments like these scream the self-righteousness that\’s hurting our cause. He should swing from a rope in a straight jacket? All drivers are insane? Give it a rest.

\”Comments like these scream the self-righteousness that\’s hurting our cause. He should swing from a rope in a straight jacket? All drivers are insane? Give it a rest.\”

i believe the commenter was referring to insanity pleas in general… and not \”all drivers\”.

It is too bad so many commenters here have so little patience for or understanding of mental illness. For better or worse, his \’punishment\’ is likely to be WORSE if he is found guilty except for insanity (GEI). A sentence for assault and attempted murder would likely be much shorter than the maximum possible, but if he is found GEI he will be under the jurisdiction of the Psychiatric Review Board for the MAXIMUM possible sentence. They will control everything he does, and he is likely to be in the state hospital for quite some time for treatment. Which if you don\’t follow the news – is not all that great an improvement on jail or prison. Even if he is released to a community setting, once he has successfully shown he is not a danger to himself or others, he will be under strict supervision for the maximum length of the sentence.

If anyone wants to read more about GEI, you can do so here:
http://www.disabilityrightsoregon.org/pubs/MentalHealthLawOregon/mh_ch3.htm

\”For better or worse, his \’punishment\’ is likely to be WORSE if he is found guilty except for insanity (GEI)\”

I don\’t about that. My wife has worked on a lot of the state\’s locked mental health wards, and the quality of life is much better than typically found in the prison system.

A real problem is screening competent prisoners who are looking for easier time in the wards. They tend to prey upon the more impaired patients who more clearly belong in the mental health facilities and are a danger to the workers. I guess that is one reason, prison systems are developing their own mental health capabilities in house.

Slick, I was referring, in a partially tongue in cheek sort of way, to insanity pleas in general. What\’s self righteous about wanting people to own their actions and take personal responsibility for them? I did make it clear that I was not making light of those with serious (read, actual) mental illnesses, but I think that it\’s abused as a legal defense. I\’m also not fighting any cause, just an individual taking a break from studies to voice my irrelevant, unjustified, non-fact based opinion.

E, Thank you for the link, it\’s an interesting read. No I don\’t have patience for people trying to ride in the slip stream of those not in control of their faculties. I also don\’t understand mental illnesses and don\’t claim to. Do you? Does anyone? There are a lot of people that make a lot of money professing that they do, but then again, I spose everyone\’s an expert, paid or not.

If I don\’t understand my own mind, why I do the things I do, including the things I know I shouldn\’t, or the things that seemed like such a good idea at the time, then how can I begin to even try and understand someone else\’s mind? I\’ve lived with depression and other \’issues\’ for as long as I can remember, but I\’ve never blamed my actions on those faults. Do I expect everyone else to live their lives in my image? Of course not. Clearly there are those who truly cannot control their actions any more than they can appreciate the outcome, but there are many that will try to use this solely as a means for bartering.

Perhaps I should have been more specific and said \’temporary insanity\’. People that are otherwise \’normal\’ but have a berzerker moment, and then says \”I\’m much better now, thank you, I\’d like to go home now\” I don\’t know if there is a legal distinction between the two, insanity and temporary, but that\’s really what I was pointing at. My original intent was to sort of avoid a long, drawn out explanation. Well, that worked out rather well for me I\’d say 😉

Question: What\’s self righteous about wanting people to own their actions and take personal responsibility for them?

Answer: Read the comments on any article on bikeportland about bikes getting tickets for anything. Next read your insensitive comments about swinging from a rope in a straight jacket.

My fondest hope the the defendent is found guilty at trial and his insanity plea is denied. He should be spending real time in jail and have his driving priviledges permentantly revoked if he ever leaves prison.

Drivers will start taking safety seriously when there are real consequences attached to their actions. A car is a deadly weapon just as surely as a knife or a gun. Intentionally hit a cyclist? That\’s homicide or attempted murder with a weapon. I\’ve had enough drivers threaten me that I realize that when people operate a car they make deliberate choices about exposing others to risk. If you engage in road rage and \”accidentially\” run someone over, it wasn\’t an accident.

We all make deliberate choices, if a drive hits me while chatting on their cell phone they have made a choice to value their cell coversation over my life. It would be no accident, but a purposful choice to subject others to a greater level of risk. Start trying these vehicle operators for murder, aggrevated assult or manslaughter. Hold people accountable.

You are confusing me with someone else. I\’ve never whined about cyclist getting tickets, it\’s that whole personal responsibility thing, remember? You run a stop sign and get caught, shut up and pay your dues. I follow the laws and expect others to do the same. When they don\’t, they need to be held accountable. So, you still never directly answered my question, but then I never really expected it in the first place, nor do I now. You did, however, clarify that you\’re projecting other peoples comments onto me, and lumping us all into one giant cyclist voice. I guess there\’s really no point in me saying anything, when others will do that for me, right?

Was what I said insensitive? Perhaps, if you lack the ability to read between the lines. But remember, you (everyone, myself included) do not have the right to not be offended. I voiced my opinion on something I feel strongly about (albeit, in a light hearted way) and went a step further and explained my intentions in greater detail. But then, you\’re not trying to understand, so why should I attempt to clarify?

I believe I\’ve used up all my vowels.

“A car is a deadly weapon just as surely as a knife or a gun.”

So in Oregon, can I defend myself with just force? What are the laws for self defense in Oregon? They seem a little wishy washy in the case of self defense.