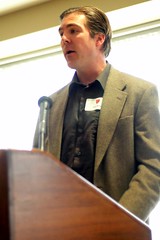 Tom Miller will be the Mayor’s
chief of staff.
(Photos © J. Maus)

In what is probably not too surprising of a move for City Hall watchers, City Commissioner and Mayor-elect Sam Adams has named Tom Miller to be his chief of staff once he becomes Portland’s mayor in January.

Miller is already chief of staff for Commissioner Adams and in my experience, the two seem to get along just swimmingly.

You’ll be hearing much more from Mr. Miller in the months to come, but as a quick primer, I thought I’d dig up a few of his old comments left on this site and share a few photos of him that I dug up from my archives. First, the photos…

Here he is, shooting the breeze in front of Fat Tire Farm before a mountain bike ride in June of 2007 (he’s on the far left): 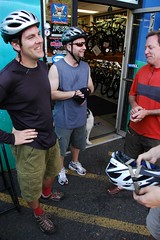 And here he is rolling down Leif Erickson road in Forest Park with Chris Distefano (marketing guy at Chris King Precision Components): 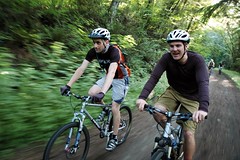 And below, he gets down to business at the Multnomah Athletic Club for a luncheon/panel discussion about the Portland bicycle industry in April 2007 (Miller is seated on the left, Oregonian Editorial board member Jonathan Nicholas is standing and Cycle Oregon ride director Jerry Norquist is on the right): 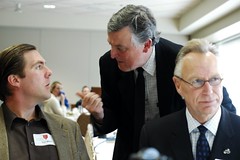 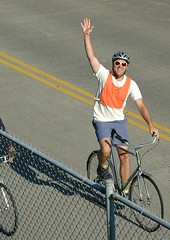 Wonder how Miller comes down on various bike issues? Fortunately he leaves comments here on BikePortland.org now and again. I searched through a few of them and here’s what I found:

Here is Miller’s take on…
…riding BMX bikes in skateparks (don’t do it).
…how to get more mountain bike trail access in Forest Park (build bridges, not enemies).
…what the bike facility should look like on a new I-5 bridge over the Columbia River (separate bikes and peds).
…how much to spend on bike infrastructure (match it to mode share, like they do in Amsterdam).
…whether helmets should be mandatory (again, follow the Netherlands example).
…his outlook of bike law enforcement with the Traffic Division’s new leadership (he’s looking forward to the conversation).
…a renewed effort for local mountain bike advocacy (he’s excited for it).
…the potential impact of the now defunct Flanders Crossing project on Portland’s bike ridership levels (huge).
…how Bridge Pedal went this year (he like last year’s better).

Whether you agree with him or not, it’s safe to say that Tom’s perspective on bike issues will play a key role in Portland’s future.

I met him on the Bridgepedal last Sunday… Talked for a bit, but I got caught up in my photography, and didn\’t see him again.

Good Luck Tom! Hope you and the family had a great time!

Before going to work for Sam Adams, Tom Miller served on the BTA\’s Board of Directors. Tom is a strong proponent of bicycling as appropriate transportation. I would guess that much of Sam Adam\’s involvement with Portland\’s bike community can be traced back to Tom\’s vision and enthusiasm for bicycling and Tom\’s connections to the community.

Thanks, Jonathan, for giving credit to one of Portland\’s most influential \”behind the scenes\” bike advocates.

Not to be a downer, but will Tom Miller help Sam walk back from that terrible decision he made on CRC? He gets the most important call wrong; I don\’t know how many things he\’s gotta do right to make up for that one!

Of course. Bike policy is the one of the most important issues facing Portland in the next four years, second only to street naming.

On BMX bikes in skateparks.

I agree that they should not be riding in skateparks.

I do however believe that here should be side by side, bmx/skateparks…

Many do not realize that skateparks are generally not designed to withstand the usage of BMX\’s, especially the acts of grinding,(knocks the cement loose under the coping) landing on flat decks (many flat sections have less internal support, and tend to crack) just for starters.