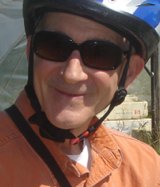 Pucher’s upcoming study, Analysis of Bicycling Trends and Policies in Large American Cities: Lessons for New York has been awarded $50,000 (with 100% guaranteed federal matching funds) by the University Transportation Research Center based at the City College of New York.

Pucher and co-principal investigator on the study Ralph Buehler, will place special emphasis on separated bicycle facilities (like bike lanes, paths, and “intersection modifications for cyclists”) with an eye toward using the information to help New York City bike planners make more informed decisions about the future of their bikeway network.

In the study description, Pucher writes that New York (with 75% increase in cycling levels since 2000), “appears to be on the right path but has a long way to go, and could benefit from the experiences of more successful cities”.

Asked about the study in a recent email, Pucher told me that he, “feels certain that Portland will have a lot of wonderful lessons to share with other cities, and that other cities might also have some really good examples of cycling provisions and policies that Portland could learn from.”

Pucher plans to visit Portland next summer where he’ll gather information for the study from local bike planners, advocacy groups, and experts.

For more on John Pucher, see his “Cycling for Everyone” presentation and check out his popular approach on how to make cycling “irresistible”.

I love this guys lectures on bicycle infrastructure, lots of enthusiasm.

I\’m looking forward to seeing what he has to say… Sound\’s like he\’s got some great ideas!

Hopefully this research will put some of the debates on this board to rest.

It sounds like the research is going to be done just by talking to people though and people\’s opinions and perceptions are just that. I guess I need to hear more about how he will conduct the research because opinion polling research never feels all that scientific to me. I would prefer to see some quantifiable scientific data and I hope that is part of his analysis.

\”It sounds like the research is going to be done just by talking to people though and people\’s opinions and perceptions are just that.\”

I\’m sorry you got that perception, but that is far from the case. This is not only \”opinion poll research\”. I didn\’t go into all the details because I didn\’t feel it necessary for the story… but rest assured, I\’m sure there will be plenty of scientific and statistical data used to come to the conclusions.

Also, I\’d like to add that the perception of opinion polling being unquantified is inaccurate. Opinion estimates are subjected to analysis of their representativeness of population opinions as rigorously as all other scientific estimates. And this shows in outcomes. For example, opinion polls have accurately predicted the outcome of the presidential election for over 50 years. Only where people have a clear motivation for obscuring their true opinions (e.g., sex, homosexuality, drugs, rock-n-roll, etc.) do opinion polls fail – and in those situations they are not relied upon by the scientific or policy for deducing peoples\’ behavior.

It is extremely useful to know opinions with respect to bicycling. For example, a key driver of transportation and law enforcement policy is (or should be) the fact that most Portlanders want to ride their bike more but don\’t because of their perception of road safety conditions.

This is Car-free John Pucher in New Jersey responding to the concern about the information we will use for our research. We intend to use the widest possible range of information from a range of sources to ensure an unbiased, objective analysis. That would indeed include some opinion surveys, especially of potential and current cyclists. But we also intend to use statistical data from state and local governments as well as federal travel survey data. We will be speaking to governnment officials, planners, bike coordinators, and NGO representatives in each of our 6 case study cities. And also reviewing all available literature on cycling in each of the case study cities. We have access to an extraordinary extensive database on cycling for all 50 US states and the 50 largest US metro areas, including Portland, of course. I hope this relieves your fears. Car-free John (who is a big admirer of Portland in many respects, by the way, but I hope that does make me too biased!) And also, by the way, I think you have, in Roger Geller, the best bike planner in the entire United States!!!

Johnathan and John, I\’m glad to hear it and I should probably actually click on the link.=) I am very interested to hear the results.

A.o., the reason opinion polls work for presidential elections is that people vote according to their opinions, so opinion dictates reality in that case. It also works for marketing because people make buying decisions based on perceptions and opinions. But in the case of what\’s actually a safer way to design a city\’s traffic flow, perceptions and realities can differ. For example, there are many things that make us feel safer, like a fence on the edge of a curvy highway with a sheer drop. If that fence is made of, say, cotton balls, it wouldn\’t offer any actual protection, but everyone who drives that road might say, oh yeah, we need those barriers because they keep us safe (maybe they didn\’t know about the cotton ball construction). On the other hand, the designers of the cotton ball fence would readily profess that it offers no protection (we\’re not sure why they used cotton balls, maybe it was all they had budget for), not realizing that there may be some psychological impact that changes the way people drive when they are near it and maybe it\’s presence does actually reduce accidents. We, as human beasts, tend to filter the information we receive into 2 categories: those facts which support what I want to believe and those which I am going to ignore or call hogwash. We all do it and we can\’t help it which is why scientists developed the scientific method in the first place. On our own, we are completely unreliable. Even collectively we can be way off – I mean most of the world once believed the earth was flat. Just read the comments on bikeportland if you don\’t believe me. =)

That being said, certainly I agree that opinion polls would be an important piece to include, but I would be disappointed if that were the entire project. Which it isn\’t so I am just blowing hot cyber air here.