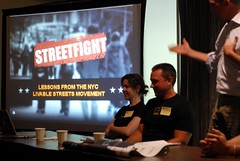 But thanks to a burgeoning collaborative effort between advocates and bureacrats, New York City is in the midst of a streets renaissance.

This morning, Carfree Conference attendees got a look inside this renaissance from several leaders of the “livable streets movement”.

In a presentation titled “Street Fight: Lessons from the NYC Livable Streets Movement”, the team behind Streetsblog and Streetfilms (now folded into the Livable Streets Network) shared the latest from the front lines of the battle over public spaces in a city that has been dominated by cars for nearly a century. 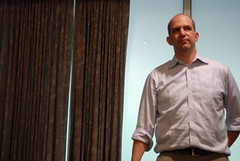 Aaron Naparstek, the editor of Streetsblog, said his transportation activism began by throwing eggs at cars. That led him to writing Honku (a collection of road rage haikus), and eventually turned into a career.

Naparstek is the driving force behind a blog that has had a major impact on transportation advocacy not just in New York City, but in many cities and towns worldwide that have been inspired by their work.

Some of what Streetsblog does is similar to BikePortland.org. But unlike this site, they have a team, a stable funding stream (Mark Gorton, who owns file-sharing site Limewire, manages a hedge fund, and founded the Open Planning Project, which Streetsblog is part of), and is much more advocacy-focused.

According to Naparstek they do “advocacy journalism” and they cover “the livable streets beat”. He also laid out other ways Streetsblog (and Streetfilms) has made an impact: highlighting best practices, amplifying the voice of advocacy organizations, framing issues for the mainstream press, supporting political allies, going after the bad guys, making arcane policy more accessible, and mobilizing advocates and community. 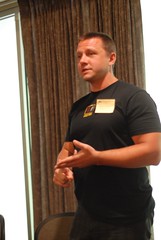 Clarence Eckerson is one of the
team’s filmmakers.

Along with sharing information about their work, their “Street Fight” presentation also laid out some interesting statistics.

These stats are sobering, but tides are turning in the fight for livable streets. Thanks in no small part to Streetsblog, Streetfilm, and their partners in the Livable Streets Network, New York City’s transportation policy and planning is heading in an exciting direction.

What’s next for the Livable Streets team? 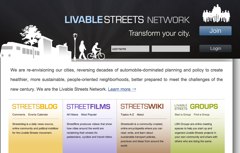 Project coordinator and technology guru Nick Grossman told us about the launch of Livable Streets Groups. The site allows visitors to join and create a profile, share expertise and experiences, and connect with activists around the world.

An online group for attendees of the Carfree Conference has been set up so they can stay in touch and continue to network and work together after the conference ends.

Livable Streets team member Lily Bernheimer said they’ve also launched a livable streets education program for public schools in New York City. They plan to put the curriculum and lesson plans online so other school districts can use them.

Bernheimer said, “We’re trying to work livable streets into a mainstream environmental movement… Similar to how recycling used to be fringe, and is now known to everyone.”

Their secret weapon for infiltrating the hearts and minds of school kids will be “Zozo,” the livable streets mascot. “He’ll be like Smokey the Bear was for forest fire,” said Bernheimer.

Check out the Livable Streets Network at LivableStreets.com.

Thanks for setting a lighthouse example of comraderie and efficiency in working together, as evidenced by the formation of the Livable Streets Network. These folks are amazing – their use of today\’s communication technology is nothing short of brilliant.
And the video work from Clarence-and-house … is powerfully effective.

I feel a real sense of pride as a [former] New Yorker.
Game on, Portland.

Man, what a presentation they gave. I want Livable Streets in my town.

I signed up on the new livablestreets.com site today! WTG, my friends.

Streetsblog is a real favorite of mine. Jonathon, I hope you find a surgardadday like Gorton someday. However, IMO the volume and quality of content you provide here is equal, or superior to Streetsblog most of the time.

This is what has to happen in every place that wants to be livable. I envisioned a network of bike____dot org\’s, but the Streetsblog is another template. The big thing is that these sites should easily link up to each other, and pool resources for national or regional issues. This could become sort of a \”bikeroots\” of national advocacy, building up from a thousand local sites, but all working together.

Jane Jacobs must be up there somewhere smiling!

A \”bikeUSA\”.org would be cool, where a bunch of local blogs get together and form a national voice. Like AP \’was\’ for print journalism(before it decided to be a jerk and kill freelance budgets, squash fair use of its material etc).

A national bike blog, built from the scrap of regional blogs(which seems bikeportland is becoming) would allow for a national voice of advocacy and a bikey narrative which is essential to truly communicating the breadth and necessity of this movement\’s goals and followers. Considering that Paul Tay travelled 4200 miles(total) to \’do\’ Pedalpalooza, I would imagine there is a niche to be filled by a blog that would cater to those are are unable to make the trip but would love to read .

The stats you put up on pollution and how it effects the people of NYC is realistic and alarming. Although they have tried to curtail people driving into work daily by expanded use of trains and buses, in the end people still like to drive into work. The main focus of people coming in stem from people commuting from the other side of The Hudson River (Rockland and Orange County specifically). Yes there is train and bus service from these areas, but as a person who commutes to the city from the aforementioned area/s, I can tell you that there are many nights where I stay at work late. Because of this, the possibility of a bus or train running at these times (sometimes past 11PM) are practically non-existant. With more people starting their workday between 10AM – 2PM in the city to “get around” high-volume traffic hours, they insist on driving in for the convenience. I’m not trying to back up this notion of thought, but perhaps if there were more public transportation options and/or frequency of these services, overall pollution in the New York Metropolitan are will drop significantly in the coming years.