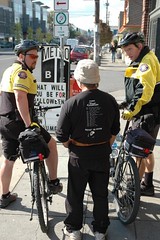 The City of Gresham Police Department has just announced that they will bolster police bike patrols during the summer months.

Gresham PD spokesman Sgt. Claudio Grandjean says the move was made possible by utilizing School Resource Officers who are available to supplement regular patrol units during the summer months while kids are on break.

Four officers will begin the bike patrols on June 23rd and will continue until school starts in September. According to Grandjean their patrols will focus on the Springwater Corridor, parks, schools or any other areas identified by the patrol division as areas suitable for patrolling by bike.

Here in Portland, we could also use more bike patrol officers. Back in January of 2007, Officer Robert Pickett of the SE Portland Bicycle Patrol Unit wrote a guest article asking community members to write the Police Chief in support of adding more officers to the bike patrol program.

Gresham is a neighboring city to the east of Portland.

Another benefit of the impending $5/gallon gas. Getting those cops out of their cars. A win win.

I wonder if they get to carry tazers too?

As cyclists we don\’t like it when we are all painted with the same brush because of a few visible people on bikes doing stupid things.

Let\’s not become what we dislike by painting all police officers with one brush.

I think the City of Gresham should be commended for responding to changing needs – first by putting more officers on MAX, now this.

And seconding what Ralph said. I would rather believe that bike officers are not going to be inclined to try to tackle us off our own bikes. Let\’s not use the same ugly prejudices we hate ourselves.

Put the cops on \”fixies\”, then lots of people could really bash them.

I just sent this to a buddy of mine who is an school resource officer in Maryland.

He sometimes comments on the monotony of SRO work. I\’m guessing that many SROs would welcome the change of pace.

And since I would guess that most bike patrol hours are in the daytime, this move would seemingly help SROs keep relatively normal work and family schedules.

The artilce says that Gresham is 17 miles east of Gresham. May I remind you that Portland and Gresham share a common boarder.

I was thinking the exact same thing – we\’re right next door, not 17 miles away. Maybe 17 miles from downtown?

re: gresham and portland.

you guys are right. that didn\’t come out right. I\’ve changed the article. (and by the way, the 17 mile figure is from downtown to downtown).