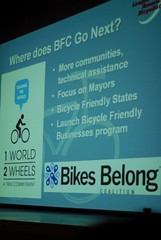 In his speech addressing an international crowd at the Carfree Cities Conference, League of American Bicyclists executive director Andy Clarke announced that his organization will launch a Bicycle Friendly Business program.

In his address, Clarke also said the League plans to release the initial rankings of their recently launched Bicycle Friendly States program in September.

To a packed room of carfree and transportation advocates, Clarke sang the praises of Portland. He said one of the reasons Portland is “so awesome” is that we’ve “had the courage to lead.” He also laid out the many facets of our vibrant and diverse bike culture.

Now that Portland has been given the League’s highest honor (Platinum), Clarke said we have to compete for bike-friendliness with European cities like Amsterdam and Copenhagen. 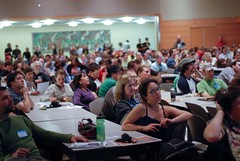 In his closing remarks, Clarke said, “We have to make transportation about people and the places we live… That’s something that the highway lobby does not have on their side.”

So, what is the Bicycle Friendly Business Program going to do?

So will the Bicycle Friendly Business program help eliminate banning of bikes in drive-thrus? Any update on this issue? I pulled up to bank teller at BANK OF AMERICA, sent my documents in via the tube. and the teller told me i had to come inside to get my documents. The bank manager said no one at the bank center (read branch) has any authority to change the rules. It was ridiculous. I had to ride around the building. Park my bike, chain it up, remove all my valuables just to walk in and get the receipt that they could have sent right back down the tube in 30 seconds.

Live from the Writer's Colony

The Writer\’s Colony at the Carfree Cities Artshow supports this program wholeheartedly. And we expect revolutionary results.

Also, we would like someone to bring us coffee.

I hope that this program will give businesses more resources and information on finding contractors to install their own bike parking so as to rely less on city-owned installations (which take more time to have installed).

That sounds about as concrete and well reasoned as Sho Dozono\’s comments about Portland being equal to Amsterdam.

Jonathan – any details from Mr. Clarke\’s speech or was this just a feel good tome? What exactly is a bike friendly business?

\”So will the Bicycle Friendly Business program help eliminate banning of bikes in drive-thrus?\”

Bikes are banned in drive thru\’s due to liability issues. Most large companies that use drive thru\’s have a company policy against.

I hate being turned away at a drive thru on my bike too, but I understand why it is done, and most people who refuse you service are just doing their job, which is to tell you no.
I had the police called on me, when I refused to have service refused to me in a drive thru. Someone in a car that had just gone thru the same drive thru handed me food out of their window, and pointed that the police were there already. So, I waved to the police and rode off into the night, with dinner.

Yet, I was in the wrong, as the person refusing me was doing their job.

I doubt this will be changing any time in the future, and not by the L.A.B..

i asked Andy for more about the program. He said it will be modeled similarly to their Bike Friendly Communities program. they\’ll also provide technical assistance and how-tos on their website.

I realize the details are still fuzzy, but will there be any kind of tax incentive in the future possibly with this? If businesses are given a break for getting people to start riding then they are more likely to install facilities for bikers. I realize its a bit chicken before the egg, but any encouragement (especially financial) would make it more feasible for many businesses.

What all does the bike friendly communities program entail?

But I guess its cool if my company just goes and buy\’s a new Hummer to get tax breaks instead. Cause ya know. Thats responsible and helpful for the economy, right?

Drive-thrus are bad anyway. They support the car culture, laziness, idling engines – etc. Still dumb to not allow bicycles as they allow motorcycles.

yes more pressure to make drive-thrus available to anyone. It CANT be any more dangerous than the parking lot.

What really needs attention is the fees Airlines charge for brining a bike on board.

I will not be making any late night trips to Wendy’s on NE Sandy anymore. They refused to serve me through the drive up on a bike even though I was the only one there. They are losing a lot of business! This is Portland and many people do not own a car. As for this being about your safety, that is a lame excuse. Most of these people ride their bicycle everywhere, through busy intersections and parking lots. We know the risks of riding a bike, but there are also risks for cars, mopeds, and motorcycles alike. As far as I’m concerned this is a form of discrimination.

Also, I used to work at a credit union in Salem, Oregon (not a very bike friendly city). We would never turn anyone down on a bike. Here is what I would suggest, close out your account (let them know why), head to the nearest credit union and find out their policy. Credit unions typically offer better loan rates and they are usually local businesses and they are non profit (owned by the members). Your money is equally insured for up to $250,000 whether in a bank or credit union.

Here are the details for the Bicycle Friendly Business program (including a link to the application).

On a similar note to the drive-thru issue, this summer I rode my bike to my local DMV office to renew my driver’s license (I don’t have a car, but use the license for ID). I filled out all my paperwork, paid my money and got my photo taken, then one of the ladies noticed my bicycle helmet and my bike sitting right outside the window. She started giving me a hard time about blocking the sidewalk with my bike (it’s one of the widest sidewalks in town and there still was enough room for two wheelchairs for get by my bike).