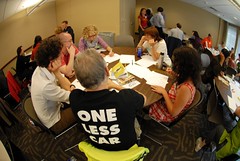 After depaving a former parking lot in North Portland yesterday, the Towards Carfree Cities Conference marched on this morning at Portland State University.

The first half of the program dealt with two topics of major interest to urban planners (and anyone interested in healthy communities): families and freeways. 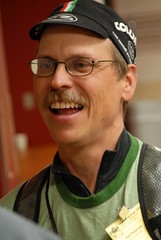 A Dead Freeways ride left from the Park Blocks outside PSU to examine former freeways (Harbor Drive) and freeway ramps to nowhere (some were built for the Mt. Hood Freeway — a project that was defeated before it ever broke ground.) Those who remained at the conference, were treated to a discussion of that infamous Mt. Hood Freeway as well as its modern day cousin (in some ways) — the Columbia River Crossing project. 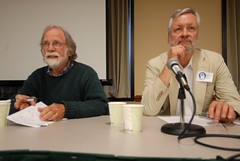 During the Q&A session, Chris Smith asked Robert Liberty to explain why his colleague, Metro Councilor Rex Burkholder, has been supportive of the CRC project (a question many of you have wondered as well). Watch and listen to Liberty’s answer below:

Blumenauer staffer Meeky Blizzard was asked why her boss hasn’t chimed in on the CRC project. Blizzard said,

“This is a regional decision. As a member of Congress, he is representing the region’s wishes on this project. He has some large concerns about it, but it’s not his decision to make… The region needs to come together on these things and if people have concerns about the CRC… they need to make those concerns known to their elected officials to help shape the process… so, take that to heart.” 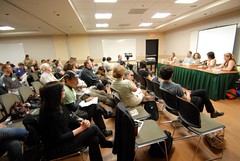 The crowd at the carfree family panel.

One woman asked the panel, “Would it be safe, or would I be irresponsible to take my child in a trailer from North Portland to PSU?”. The answer was a resounding no, and several people (in addition to the panelists) spoke up to say, “We do it!”. 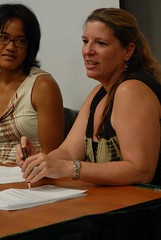 There’s definitely a buzz in the air. That’s probably due to the fact that not too long ago, “carfree” seemed like a fringe, radical concept for most people. But today, with a perfect storm of factors making much of America rethink their transportation choices, carfree is much more mainstream.

In a few minutes, the keynote speeches will begin. Scheduled to appear are the executive director of the League of American Bicyclists Andy Clarke and carfree city advocate Gil Penalosa.

More coverage to come. For now, check out more photos from the Carfree Conference Photo Gallery.

And Andy Clarke just gave Jonathan smoe serious praise when talking about Portland\’s Platinum rating and all of our collective accomplishments. Pretty cool, and I know Jonathan is too modest to admit it here.

I you can\’t make it in person watch it live here:

Ok, I watched the Liberty clip … and I still don\’t understand why Burkholder supports the CRC project. What am I missing?

I tried to watch the Liberty clip, but got a: \”this video is no longer available.\”

Speaking of problematic things, is anyone else having trouble with delays in comments appearing, or comments not appearing at all? I see that moderation is enabled, but for a while there I was seeing my comments appear instantly. Is the moderation a new development?

OK, this time my comment appeared instantly :). It wasn\’t working earlier on the naked bike ride thread, though.

Ai yi yi, now the YouTube clip is working for me too.