“If I had to choose between Bush on his mountain bike and John Kerry on his Serotta, I’ll take Obama.”
–U.S. Congressman Earl Blumenauer

Democratic presidential nominee Barack Obama made headlines last week for his private meeting with members of the bicycle industry in Chicago.

U.S. Congressman Earl Blumenauer (who some have whispered would make a great Transportation Secretary under Obama) was also at the event. He was so moved by what he thinks the event meant for the bicycle movement, that he took time to share his thoughts during a phone call with me a few days later.

“The place was just packed… and the list of people in the room read like a who’s who of the bike industry. During both the informal meeting and the official statements released later, Barack clearly understands the connection between obesity and Safe Routes to Schools and that it doesn’t take much of a shift in the Transportation Bill to make a big difference.

He wasn’t just open to it [bicycling], he was supportive of it.” 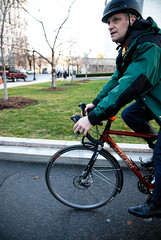 During the bike industry meeting, Blumenauer said Obama was asked about how bicycling fits into broader agendas. Blumenauer remembers that he answered, “in terms of how we make communities work.”

“He was very clear that cycling is part of a comprehensive solution that gives people choices. Specifically, he mentioned more intelligent land-use and the use of rail to move goods [instead of trucks].”

Blumenauer referred to the event as, “a coming of age moment for the bicycle constituency.”

He then thought back to the 2004 election (between Kerry and Bush) and compared it to the year’s race.

“Back then, we also had two people that liked to bike. They were serious bikers… but Bush and his administration just didn’t get it (as evidenced by Mary Peters’ comment). They did the absolute minimum.

We’re trying to put a human face on cycling and to make it integrated into everyday life. If I had to choose between Bush on his mountain bike and John Kerry on his Serotta, I’ll take Obama …I think that’s something people can really relate to.”

“…we’ve got a guy who just plain likes to bike, understands it, and has already expressed in very clear and direct ways an understanding of what’s possible. The fact that he and his wife like to bike with the kids, I think that’s a very important signal.”

Back in May, Obama held a rally in Portland and an estimated 10,000 of the event’s 75,000 participants showed up by bike. Blumenauer made sure to remind Obama about what that meant:

“I pointed out to him that the rally in downtown Portland was only possible because of all the folks who rode bikes. Could you imagine if all those people would have gotten downtown in their cars?”

Blumenauer said he’s been promoting bicycles as a viable form of transportation for a long time, but he’s never seen so much happen so fast.

We love Earl for the work he is doing to help bikes. Every bike on the road helps every car driver with less traffic and cheaper gas. But we would love Earl more if he would do his more important duty in the constitution to bring an illegal president and VP to a fair investigation, AKA impeachment. Earl\’s duty is to be a security guard, and he is sleeping. The bike community is just as guilty now for silence as Earl, as Bush. Here is just one of 35 reasons to impeach?
http://www.mcclatchydc.com/reports/detainees
call Earl\’s office at (503) 231-2300
His staff (Julia & Kate) could not direct me to any new update. Earl says impeachment is not on the table.

Well I can attest to bikes enabling 75,000 attendees to last month\’s Obama Rally. I happened to be driving back from Reach the Beach thinking I had missed the rally. I saw crowds at the water front, drove into downtown and into the first Smart Park I found. Crowds were wrapped around several blocks. I parked and walked through Waterfront Park and realized why I had found parking so easy. I couldn\’t believe the crush of bikes all over the park. With no previous planning I made it up to the Hawthorne Bridge and a view of the back of Obama\’s head. That was great since I saw him at the Convention Center in March and I nearly have his speech memorized from C-Span coverage. I wish I could find aerial coverage of the bike parking situation that day and that Obama could have seen what I saw.

Our representative here in the third district refuses to call for impeachment of the war criminals in the White House. He mocks Dennis Kucinich whenever he can. Blumenauer, during an interview for the Willamette Weekly with John Sweeney and myself, said that Kucinich only got about 2% of the vote for President and based on that, said impeachment was not an issue. This is our representative in the most progressive district in the state, if not the country. He got over 85% of the vote in the primary on May 20th of this year. This was one of the reasons I finally left the democratic party and became an independent. I cannot stand the cocktail democrats who call themselves progressives and their constituents buy into it—-it boggles the mind!

We, Individuals for Justice, have been protesting outside of Blumenauer’s office for almost a year now, holding him accountable for his actions. We have been arrested, threatened, ignored and frozen during the cold months but we will remain until bush and his dick are out of office or Blumenauer calls for impeachment.

Blumenauer is an opportunist and people in his district are being fooled by his statements on how hard he is trying to stop this war in Iraq. He is a liar, there is no war in Iraq, only occupation and genocide of the people of this destroyed nation. He must be replaced by a peacemaker.

Bottom line—Blumenauer, Pelosi, Reid are punks, Kucinich is a hero!

OMG…people its BikePortland not ImpeachBush, take it to another site. Please.

We\’re gonna give Earl and Obama tons of support with onemillionbicycles.org when they take on the transportation bill August 9th 2009! We can be the change we want in the world. It\’s about coupling rhetoric with actions. History is not destiny. Things don\’t have to happen just because people in power today say they should, 12 lane bridges don\’t have to be built, oil wars can end by shifting to diplomacy, conservation and softer path technologies, but most of all ride that two wheeledd freedom machine cause bicycling just feels good while it does a body good! ( apologies to the milk campaign and, to a lesser extent Ed Grimley jr and those oatmeal ads)

I like Kucinich, but he doesn\’t seem to be electable. Bush is an unfortunate chapter in the country\’s history, but I\’d rather see it move on towards supporting Obama and a better life, than kick Blumenauer around for not wasting time on a failed effort to get Bush impeached.

……To all those who think this is off topic. Every item posted on Earl is related to both what he does, and fails to do as his sworn duty. Schools and the bike community would have $500 billion if we had the courage to ask for a fair investigation of the the illegal President & VP and Iraq war. This is on topic. It is not a matter of wasting time to impeach, it is not a matter of the right time, it is not a matter of pissing/pleasing the voters. It is not even about the money. It is about 500,000 innocent lives lost in the region and the human rights abuses.

If I had to choose between Bush on his mountain bike and John Kerry on his Serotta, I’ll take Obama (Smoking on his Honky Tonk)…I think that’s something people can really relate to.
Sure…I don’t buy it. I believe he lives a very unhealthy lifestyle…one that does not align with health conscious bike riders.

Earl for VP? Wow that would be a statement!

\”SG\” – are you saying those that smoke, don\’t bike? Does the word Myopia mean anything to you?

Step outside of your little tiny bubble for a second. Not everybody rides a bike to \”healthy\”. Some actually use it for transportation. What a novel concept.

Jamie…Don’t get me wrong. I enjoy a nice clove after my 17 mile commute just as much as the next guy. In fact, I’m pretty lucky that I have a McDonalds right across from my office…I don’t have to pack breakfast or a lunch thanks to their dollar menu. And thanks to IntelliQuote, I was able to acquire a $500K level term life insurance policy, from an A+ rated company for only $20 a month to protect my family when I die from a coronary at the age of 35.

Different point of view doesn’t equal Myopia. For me…cycling is an excellent way to be healthy, whether it’s commuting to work, training for a race, or enjoying the outdoors..it’s good for you. Smoking is not.

Obama is clearing reaching to group of people just for votes.

Obama smokes? So what. I used to smoke. My girlfriend smokes. It\’s a nasty habit, and highly addictive, but it doesn\’t make you a bad person because you cannot quit right in the middle of what must be an incredibly stressful job: running for president. Give the guy a break. And watch the cynicism. It\’s not useful to cut down someone who isn\’t your idea of the most perfect human being ever if it means you might wind up with Bush\’s third term instead. Criticize Obama? Fine. But I dare you to tell me you\’re not voting for him. I dare you to tell me there\’s no difference between him and McCain.

Blumenauer\’s got another article over at blueoregon.com. Some of the same material, but might be worth reading. If you want to take a look:

On the bike with Barack…over at blueoregon

I first commuted by bike over 40 years ago. It is also always a risk to ride a bike anywhere in our car crazed country. I love what Earl has done for biking. Unfortunately, he seems to have lost his nerve.

How can Earl understand that risk if he is afraid to take a political risk and speak out for impeachment of both Bush and Cheney? He is afraid to risk speaking because he has his heart set on his personal political advancement.

Earl, You\’ve crashed. Get back in the saddle and take a risk. Show some leadership in calling for impeachment. Then perhaps we can trust you to courageously challenge big oil as secretary of Transportation.

What are the odds that Bush could be successfully impeached? \’0\’ as in \’zero\’. Thanks Blumenauer, for for not wasting any time in vain on such a quest.