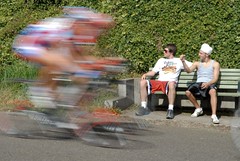 These guys had the best seat in the park.
(View Photo Gallery)
(All images © J. Maus)

After Tuesday’s opening Prologue, the Mt. Hood Cycling Classic made its way a few miles east to Mt. Tabor Park where over 200 of the nation’s fastest cyclists competed in a 1.3 mile, multi-lap criterium race.

A warm sun, high clouds, and spring flowers welcomed a healthy crowd. They were treated to a perfect race for spectators that including grueling climbs, sharp corners and a downhill that catapulted the pack of racers at speeds of over 40 mph.

Standing just inches from the pack, I nearly lost my hat from the draft as they whirred by. 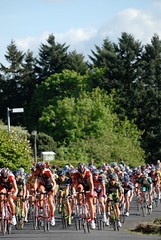 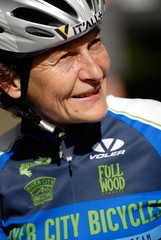 The action started with the women, and among the star-studded field was none other than Jeannie Longo-Ciprelli. By all measures, the 49 year-old Longo-Ciprelli is a living legend. With 51 French and world championships under her belt, she is still a threat to her competitors — many of whom are less than half her age. In a story on VeloNews yesterday, one of the competitors said she was “just in awe” at the thought of racing with her.

Longo-Ciprelli — wearing the racing uniform of Team River City Bicycles (they put together a composite team for the event) — finished 19th yesterday and I caught up with her after the race.

“I’ve raced in Idaho before and always wanted to ride in Oregon,” she said with a thick French accent. Peering out beyond the trees into the Mt. Tabor neighborhood she added, “There are many green areas here… it is quite beautiful. In France, in the city, we don’t have this many parks and quiet places.”

I asked her what keeps her going. “I try to get fun in what I’m doing,” she replied, “when the race is like today [her eyes shot skyward to clear blue skies] it is fun… but I did not like so much the rain yesterday.”

“I try to get fun in what I’m doing.”
–Jeannie Longo-Ciprelli when asked how she stays motivated

Longo-Ciprelli said she looks forward to the rest of her week in Oregon. As for her chances to snag a stage win or finish atop the general classification? I doubt anyone will count her out.

Back to the racing action — the men’s field tackled Mt. Tabor’s dreaded climb. As their race wore on, the crowd filled in. Just after the start/finish line, near the playground, the largest crowd had assembled and at least one group clanged a bell and screamed encouragement (and other things I can’t mention here) at the passing racers.

These men and women needed all the encouragement they could get. They raced their hearts out and the climbing took its toll. Check out a before and after portrait of local cyclocross legend Erik Tonkin:

He wasn’t the only one feeling the pain:

Hey – how could you forget to mention that Portland\’s very own John Howe from Team Beer lead the field for three laps?!

Very nice write up Jonathan. It was good to see you out and about shooting it out with the pro reporters. The before and after of Tonkin is classic. The race was very fun to watch. I couldn\’t belive the wind that was generated when the riders went by. Felt like a train roaring by.

It was one of the best crits I\’ve watched in a while and the venue was a true pleasure. It was fun traversing all the different parts of the course during the race to catch the uphill, downhill, flats and finish line…

Any word on whether Portland will become a regular starting point for the Mt. Hood Classic?

yesterday\’s race was full of awesome!!!!!

Couldn\’t have asked for nicer weather or a nicer venue for yesterday\’s crit! We were so lucky to get to watch Jeannie Longo up close like that. It was also pretty awesome to see our local boys go pedal for pedal with some of the nation\’s best racers.

I was thinking of going up to Meadows to see the end of the Stage on Saturday,any idea when the races are going to arrive there, more or less?

Our guessitmate for Sunday is just over 3 hours.

Chad, et al. may want to evolve the race le Tour style around the state with Portland playing a prominent role on either end. We\’re all for it.

the weather was perfect and the riders were amazing. we had a great time and it was good to see you there!