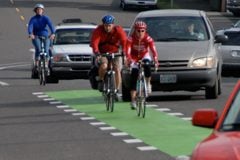 Green bike lanes, like this one on
SE 7th in Portland, are also being installed
in Seattle.
(Photo © J. Maus)

Portland isn’t the only city in the region to go green for bikes. The Seattle Department of Transportation installed that city’s first green bike lanes earlier this week.

According to a press release from SDOT, green bike lanes were laid out in two locations on Tuesday (5/6) and additional locations are slated for installation today.

In an interview on KUOW radio in Seattle this morning, SDOT spokesperson Megan Hoyt emphasized that the new markings are meant, “for drivers and cyclists.”

“We are trying to raise awareness, in two ways. One for the motorists who says what is this thing green. Oh that means someone might be next to me. And also to guide bicyclists to the place we’d like them to be at the intersection.”

In the same interview, David Hiller with the Cascade Bicycle Club specifically called out Portland’s success with the green lanes:

“The experience in other cities like Portland is that it has reduced conflicts at this point because it draws special attention to the bike facility, where there are weaving and turning movements. And just knowing that when I’m out there on the street, I’m a little bit more visible, you know always puts me at more ease.”

Funds for the the project came from Seattle’s Bridging the Gap transportation levy that was passed by voters last year.

It will be interesting to see how many other cities around the country begin to adopt green bike lanes.

Those are some gnarly intersections in Seattle, it takes some real grit to ride in those.

I wish they had those when I was riding around Seattle!

waiting for some lanes

Now we need more bike lanes. If you live in the south end of town ex \”georgetown, south park, white center.\” you can\’t find a bike lane on any major arterial.

Are Portland\’s green bike lanes made from green painted gravel like Seattle\’s are? When I was down there a couple weeks ago I didn\’t think they were. Is the gravel part of the process or is this something different or \”new\” that Seattle is attempting? Maybe they\’re not complete, but it sure seems odd so far. The bike lanes, bike boxes, and bike routes in Portland are second to none in my experience, it\’s simply paint and painted well; I\’m not sure why Seattle has trouble using what is already known to work.

Our green bike lanes are thermoplast affixed to regular pavement. No gravel whatsoever.

Note the Oregon driver crossing the lane (probably without a blinker) while looking at the cyclists in front and not noticing the rider in blue. Sigh. I\’ve become a pessimist. 🙁

Can we please paint the bike lanes green at Murray and Allen in Beaverton? Pretty please?? I\’m tired of nearly being hit by folks using the southbound segment as a right turn lane, let alone frequent blinker-free right hooks.