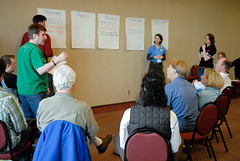 The real heavy-lifting of the Oregon Bike Summit happens in the break-out sessions.

This morning the 200 nearly attendees selected from four topical sessions. Then, after a lunch that featured an overview of the national Safe Routes to Schools program and a keynote from Gail Achterman (Chair of the Oregon Transportation Commission), they broke out into legislative and action-oriented sessions.

This mornings sessions included sessions on how to plan successful bike events, how to effect policy at the local, state, and national levels, how to create successful partnerships, and how to build bike-friendly communities.

Brad Upton, a citizen activist who drove up to the summit this morning from Corvallis, attended the policy session. He said he learned the importance of connecting with local politicians and turning them into “champions” for the bike movement. “Karl Rohde [the BTA’s legislative guy] told us how influential we can be just by making a connection,” he said, “even if you can turn just one of them onto bicycling.” 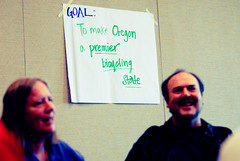 At the afternoon legislative sessions, attendees broke into three topics: transportation, recreation and events, and industry. The goal of these breakout sessions was to get into small groups and brainstorm ideas about priorities and action items.

The discussions were lively and the groups were a diverse mix of policy makers and citizen advocates.

Scott Bricker, the executive director of the Bicycle Transportation Alliance sat in for much of the industry discussion. He said, “I’m here to learn. This part of the bike community is new to me and it’s exciting.”

Each of the three sessions decided on their top five ideas and then presented them to the entire group for a discussion.

Next up, I’ll present those top five priorities.

For more photos of the action at the sessions, check out my latest photos in the Oregon Bike Summit gallery.