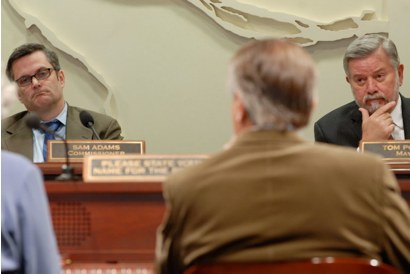 With a major setback at City Council today, the question now is, what’s next?

Commissioner Adams did not secure the votes he needed today to enter into a contract with Kuney Construction to begin the relocation and construction of the Sauvie Island Bridge span over I-405 at NW Flanders.

Despite unanimous public testimony in support of the plan, Commissioner Dan Saltzman (the deciding vote) did not feel comfortable pledging his support*.

[*Update: Saltzman was not the deciding vote. Since this was an emergency declaration it required unanimous support from everyone present at Council and Mayor Potter also voted no. Initially, Potter was not expected to attend, which is why I previously thought only four votes would be needed.]

After the vote, Saltzman told me he is in support of the idea of re-using the Sauvie span, but he does not think the City should just give the contract for the job to Kuney Construction. Saltzman is worried that the current proposal puts the City in a vulnerable position with Kuney.

“I’m saying, let’s get the bridge [buy it from Kuney], then do a competitive process for the work.” The contract as it was proposed this morning would have been the largest no-bid contract in Portland’s history.

Saltzman’s Chief of Staff Brendan Finn said his boss just felt like they were being rushed into a decision. Explaining his position at the Council meeting today, Saltzman said, “The last position I want to be in is having a contractor thinking they’ve got us over the barrel.”

Saltzman’s “no” vote was a huge blow to many who attended today’s meeting.

According to the BTA’s Karl Rohde, if this proposal would have passed today, the new bridge would have been opened by this December. “It would have been quite a Christmas present to the community,” he said.

But with Potter and Saltzman voting no today, unless a last-ditch solution can be reached to save the Sauvie Bridge span, a new (narrower and concrete) bridge would likely not be built for at least another five years.

According to sources, that last-ditch plan will be to have PDOT enter into a negotiation with Kuney Construction to purchase the bridge and move it off-site to complete some prep work (initial estimates put the cost of this at $2.4 million). At the same time, the City could put out a formal Request for Proposals (RFP) for contractors to bid on completing the job.

According to Saltzman’s staff, if PDOT succeeds in purchasing the bridge, and finding a more suitable contractor relationship, he would support the plan.

Unfortunately, according to Adams’ office, Kuney is at the end of the line and they do not seem likely to be willing to wait much longer for a deal to materialize.

Commissioner Adams acknowledged that today’s vote was a setback, but said he will now work to address Saltzman’s concerns.

Hopefully, PDOT, City Council, and Kuney can quickly come to the table and figure something out. For all the reasons you read in the testimony today, it would be an awful shame for this opportunity to pass us by.

Would that be tall-bike jousting NEKKID?

The more I hear about this bridge, the less I care. There have to be more important and valuable things to be spending our time and political capital on.

So, Saltzman\’s position is that the City Attorney is incapable of structuring a contract so that the City doesn\’t get taken advantage of? What a joke. If that\’s the case, I\’d say the City has bigger issues than this bridge.

And, at the end of Potter\’s term he finally decides that his priorities are (1) fixing streets, and (2) building sidewalks for children? Well, that\’s more than we\’ve heard from him for the last four years. At least now that he\’s about to leave office, we know what his priorities are. What an utter failure as Mayor this clown is.

Since it did not pass, I expect those streets and sidewalks to be paved by December. After all, all that was holding them up was this proposal, right?

So Saltzmans plan is to buy the used span (for a cost unknown to us), then possibly store it (at what cost?) and get bids form around town and *hope* it comes out lower? If he was pro-sauvie/405 span that seems like a lot of unknowns to bank on resolving.

Id love to see this moved forward quickly before the CRC tidal wave of politics comes back for another round.

Is it just me or does Adams like kind of like a boxer (the dog breed) who just got told \’no\’?

Process question here — Why would a new-built cement bridge need to be only 15 feet wide? Has this bridge\’s plan and timeline already been decided on?

Another question — once we have our new Platinum Bike Master Plan, will projects like this be prioritized somehow?

As I\’ve understood it, Elly Blue, there are a litany of federal regulations for pedestrian bridges over depressed interstates, and these regulations do not allow the construction of a bridge similar to the Sauvie Island proposal. Federal Engineering Regulations suggest that pedestrian/bicycle bridges over interstates remain a certain feet wide and tall. (N Failing Street over I-5, I believe, is a good example.) Because this Sauvie Island bridge wouldn\’t be technically \”built,\” somehow it fell in a loophole for those mandates.

Sad to see this project fall through the cracks. Makes me wonder – what can the BTA and assorted alt. transit allies do to lobby ODOT or even the Federal DOT to relax the stringent laws and encourage pedestrian friendly bridge/tunnel developments over/under interstates? A tall order, perhaps, but nothing the BTA isn\’t capable of starting a discussion about.

Thanks for the coverage Jonathan!

Lets all keep our fingers crossed for the last ditch effort!

There is good reason for Kuney construction to be favorible to the bid process. They own the bridge, but as scrap metal it is only worth $35k. They can\’t just blow it up because it is covered in lead paint. So they will probably have to put it on a barge, and ship it to the location where the new span was built to have the paint removed before anything else can be done with it. It\’s much more valuable as an intact span than as scrap metal, and if they have it on a barge they will want to sell it as a bridge. As the company that has been working with this bridge for years they are the most qualified to install it on I405, and would most likely be the lowest bidder. So there is a very good chance this can get worked out.

On another note I was 100% convinced that moving the bridge was the right thing to do after hearing all the testimony. It may be the only thing needed to turn NW into an area with lots more bike riders. As it is now I ride an extra mile or more in order to get to NW safely. For a lot of people an extra mile means they take the bus instead.

Tom Potter is the biggest waste of time this city has seen since, well…. he took office.

I wonder what the suicide rate is for bridges over depressed interstates.

Sorry. It was just too tempting to pass up.

But seriously, I have some sympathy for Saltzman\’s position. It\’s not an issue of the city attorney not being able to draft a bullet-proof contract (although I challenge even the other attorneys on this list to draft anything that is bullet-proof), but rather an issue of going into contract negotiations with a party on the other side that already knows how badly you might or might not want something.

Cecil, I agree Saltzman has a legitimate concern, but my point is that (a) it is one that can easily be solved by adequate contract drafting, and (b) the bidding process does not solve the problem of cost overruns.

It is difficult to see how you are going to get a lower bid then from the vendor who has all the prerequisite knowledge on how to move the bridge. But even if you put it out for bid, there is the same likelihood that there will be cost overruns once work is underway. You solve those with a well-drafted contract, and those provisions are well-known to construction lawyers.

Saltzman\’s issue strikes me as mostly a red herring. The real issue is that the poor thing felt \”pressured.\” God forbid the City should act boldly, quickly, and decisively on improving conditions for cyclists and pedestrians.

I\’d like to know how they are coming up with the estimated cost of the Narrower bridge option, especially if it isn\’t going to be built for 5+ years. It is entirely possible that by the time it is to be built, it will be more expensive to build than this proposal to reuse the Sauvie Island Bridge would be.

Has this been brought up at all? At least Potter won\’t be around in 5 years to drag his feet on it… that man would be a fine mayor to some little podunk town in 1950\’s Wisconsin. His time in office has been a complete disappointment and utter embarrassment for a city priding itself on creative solutions and long-term visioning.

Potter is playing anti-Sam politics because his ego-panties are in a bunch. Good riddance (not soon enough) to a total failure of a mayor that I was initially excited to support.

I guarantee you that if PDX votes in the Grandpa Sho/Len Bergstein crew, we\’ll have at least four more years of this kind of BS. A huge setback at a watershed moment.

As if I wasn\’t already for the plan, the moment I heard about the timeline for re-using the bridge versus building a new one, I was completely on board. I\’m not going to wait five years for a narrow pedestrian bridge!

Actually, I think this is what happened:

Potter figured that the 4 commissioners were going to vote for the proposal, and since he was against it yet didn\’t want to appear as a lame duck, decided he wouldn\’t attend – all the responsibility would lay on the 4 commishes.

Then Saltzman told Potter he was going to vote against it, and he wanted support, so he asked him for support in voting against it – lest he appear to be a party pooper.

Of course, most all of these \”public\” votes are decided long before any \”public testimony\” – it\’s not like there isn\’t careful deliberation regarding the ramifications of these proposals beforehand

Its like I used to tell my kids, parents provide the basics, if thats not good enough, they pay the difference. If the Sauvie/405 project is that well supported, let the city pay for the basic (e.g the cost of the new bridge) and let the community pay the difference for the Sauvie Bridge. Seems like there is enough support to raise the $1.5M or so additional amount required.