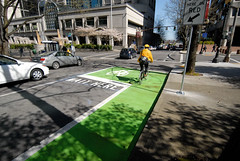 The City of Portland has installed two more green bike boxes and painted bike lanes; including the first one on the west side of the river.

They also installed a bike box, and are nearly done with a new painted bike lane on SW Madison at 3rd (they still have to finish the green bike lane through the intersection).

While taking these photos at SW Madison, I ran into PDOT’s bike box project manager Rich Newlands. He noted that it will be interesting to see how people respond to a bike box at such a highly visible location (3rd and Madison is just one block away from City Hall). In the short time I was there, every car complied with the new rules.

For the many bike commuters whose route takes them from downtown Portland to Southeast, they’ll now enjoy three bike boxes on their way home. Here are a few more photos…

For more on bike boxes, see my Special Coverage Page.

This intersection at SW 3rd and Madison is the site of some of Tri Met\’s most repeated atrocities towards cyclists and pedestrians. I can only imagine what will go on in this bike box, regarding buses.

Is there going to be a police sting here, targeting Tri Met driver\’s, as there should have been ages ago?

Is there anyway to request one?

Yeah, it will be really interesting to see if the Tri-Met drivers actually start respecting cyclists\’ rights at SW 3rd & Madison because of the bike boxes. If so, that would be pretty awesome.

I haven\’t noticed many cyclists using the actual \”box\” part of the bike box – and I don\’t blame them. Anyone have experience with near misses inside the box (as opposed to the curbside bike lane part of the box)?

I\’d much rather be out in the \”box\” than on the curb. I often do this even if there isn\’t a glowing field of green road surface around me. Frankly, I don\’t understand why the detractors to these boxes are so worried about people using them?

yeah I always pull over to the left to be in the middle of the lane at a stop. I\’d much rather get going and then move over a little when it\’s safe to let cars pass, but I have noticed at least in photos, it seems a lot of people are sticking to the curb. I guess as long as cars are still behind the line it\’s cool. I\’m wondering how many motorists are going to use it as an excuse to be even ruder with people on bikes. pissed off that we\’re getting more rights than they think we\’re worth.

Scott,
Haters are haters no matter what.
Viva la boxes!

I was very pleased to find these boxes on my ride to the April Fool\’s Day ride for Sheldon Brown. I got to use two of them today. I was quite excited when I was surprised by the one on Madison; so much so, in fact, that I yelled out a triumphant \’Bike Box!\’

And these are grammatically correct Bike Boxes. From Jonathan\’s pictures, they are \”WAIT HERE\”, not \”WAIT-HERE\”. It seems the lettering is quite a bit smaller however.

I\’m curious about the tri-met situation as well. How are buses supposed to access the bus stop at that corner? I can\’t imagine that they\’re supposed to cut through the green lane. Did they move the bus stop?

I\’ll have to ride through and check it out.

I think the bus stop is another block or two down the street (closer to the bridget) that you are thinking of. The bike box is on the block that sits between the two parks. I\’m really excited for this box, as this light has always had a lot of right turning cars..

I wonder if there\’s a list somewhere of intersections that will be getting bike boxes. So far the choices seem fairly arbitrary to me. SW 3rd and Madison seems like the most useful one so far, but putting two on lower Hawthorne doesn\’t make much sense. Especially when the real hell of the SE 7th intersection is finding a way to turn left onto 7th heading north.