[Via the Portland Mercury Blog]

Check out City Council candidate Harold C Williams Two. He’s announced a run and bike ride he hopes will end with a job at City Hall: 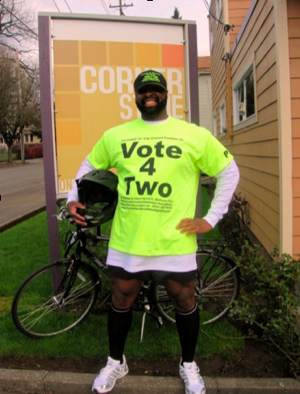 “I will run from Corner Stone Plaza located in North Portland (2752 N. Williams Ave, Portland, Oregon, 97227) to Council Crest in Southwest and back to Corner Stone Plaza and then continue to bike to the top of and Rocky Butte in North East Portland and Mt. Tabor in South East Portland, and finishing in the on steps of City Hall May 20, 2008 the day of primary to show the citizen of Portland how hard I will work for you once in office to map Portland’s city government.”

Read more over at the Mercury…