This article is by contributor Carl Larson. Carl previously wrote about the Zoobomb art rack project. 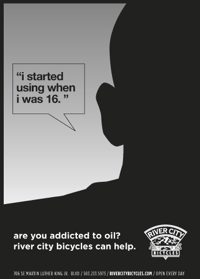 One of the many clever, poignant,
and timely ads that River City Bicycles
has run in local weekly newspapers.

They are everything from powerful public service announcements, good-humored guilt trips, outraged cries, and cutting commentaries on our nation’s commuting culture.

“My philosophy on advertising is that if you have the means to get a message out, it had better be a meaningful message.” That was Dave Guettler’s response when I emailed him a few months back asking why Southeast Portland-based River City Bicycles had such incredible print advertising.

While many other retailers use their ad space to tell you all about the great deals and new products they offer, River City’s ads rarely mention products and never mention prices. Guettler explains that he’s played that game for previous employers but takes a different course for his own business.

“I get my best ideas as I ride my bike to the shop from Damascus [20 miles SE of Portland] every day. I also have an incredible artist I work with, Andrew Reed, who interprets some of my ideas into workable ads, along with coming up with a lot of his own ideas.”

With taglines, “Once a week, that’s all we ask,” many of their ads offer a gentle prod towards bike commuting while offering up vicious commentary on the health, environmental, lifestyle, and economic nightmare that is commuting to and from work in a car (At one point, River City Bicycles even sponsored traffic reports on a local radio station). For example: 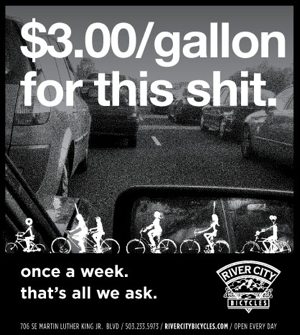 And others simply remind us of the various joys of riding a bike: 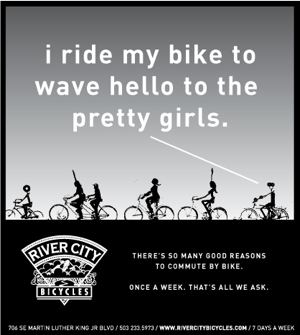 See an entire gallery of their ads here.

But it’s their timeliest ads that always impress me most: 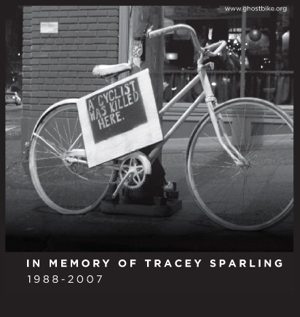 The powerful image above ran in the Portland Mercury immediately after Tracey Sparling was killed (and, sadly, another one ran soon afterwards for Brett Jarolimek). Most people probably didn’t realize it was paid “advertising.” There is no logo or mention of a company or product. The only contact information was a web address, ghostbike.org.

This prioritization of community spirit over logo placement, sums up what makes River City’s advertising so endearing. 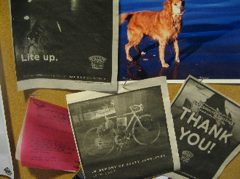 Surely there is some worth to having
your ads lovingly cut out and tacked up like art.

Some retailers consider getting their name out and advertising bargains to be the purpose of their ad campaigns. For some that may be true, but perhaps they underestimate the value consumers place on ads like Guettler’s. Have you ever seen an ad for “LOW LOW PRICES” or a “SPRING INVENTORY BLOWOUT” tacked lovingly to a cubicle wall next to a love note and a dog portrait?

River City Bicycles has just put a collection of their “Commute by Bike” ads on their website. Check them out, it’s worth a visit.

[Disclaimer: Yes, I realize that River City advertises on this site, but that was hardly the inspiration for this article.]

Pretty much sums it up.

Some are very funny! One of my favorites?

\”the more I used the bigger my ass got\”

I think I almost sh*t myself.

One of the things I look forward to every Wednesday on page 3 of the Willamette Week.

River City\’s ad on \’using\’ brought a tear to my eye. The campaing is great. Thanks River City.

Hey! That\’s my bulletin board! And my dog!

I love this.. hehe * IF you hear someone
say THANK YOU for riding your bike thats me. 🙂

have a nice weekend all
Joe

I\’m a bike business lifer; started as a high school student in 1971. Dave Guettler\’s ads are flat-out, the absolute best I have ever seen anywhere, any time, from any store, no contest!
His first and maybe my favorite, was the \”Isn\’t your neighbor\’s life worth 10 seconds?\” Bravo, Dave and employees, bravissimo!

Thanks for all the kind words. As much fun as it is, every now and then the creative well runs dry. If any of you have some ideas, please pass them along to me!
See you on the road, David Guettler

Having known Dave since we were kids riding our bikes around together, none of this praise comes as a surprise to me. These ads speak of the passion and commitment he has for cycling. The ads for the cyclists who died (sans any reference to River City) aptly demonstrate that while he is in the business, in his world \”business\” takes a distinct second seat to people. Portland is lucky to have Dave as part of the bicycling scene.

My favorite is still their ad from 2003\’s worst day ride with the Japanese snow monkey peering out from under the snow, \”Dress Warm Little Monkey, It\’s Cold Out There.\”

Santa is available for a River City ad on the PDX bike boxes.

I have the \”work hard ride home.\” ad hanging in my cube

I guess I better get back to work… 😉

If it has not been done how about one juxtaposing car signaling and bike signaling.

The adds are always fun.
My favorite is the oatmeal
http://www.rivercitybicycles.com/view/displayimage.php?album=3&pos=15

They have! and the owner of Quaker Oats, Pepsico sent David G. a letter saying he was violating their trademark. I covered the story back in March of 2006.

Actually, funny story. After I got the \’Cease and Desist\’ letter from Pepsico, I wrote back and tried a \’since we are appealing to a healthier demographic, if you pay me $5000, I will run the ad again\’ approach. They didn\’t think that was very funny.
Dave

Commute by
bike,
brothers
and sisters!

that one is on my fridge.