The City of Portland’s Bureau of Maintenance is pushing forward to improve bike/truck safety. 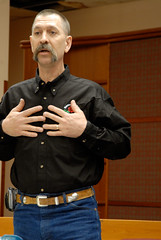 Raymond Gawthorne of the Bureau
of Maintenance spoke about their
efforts to improve bike safety.
(Photos © J. Maus)

Following the lead of the Water Bureau, Gawthorne (he’s also Vice-Chair of the Bureau’s Safety Committee) said he has the backing of “100%” of his co-workers and bosses and they plan to make, “commuting on the roads as safe as possible”. He has reason to be sincere; both of his daughters are not only heavy equipment operators like their dad, they are also daily bike commuters.

“A bicycle in my mirror is a blink.”
–City of Portland truck and equipment operator Raymond Gawthorne.

With his straight-talking demeanor, Gawthorne told the crowd of about 50 (most of them cyclists) that, “A bicycle in my mirror is a blink.”

On that note, he said the Bureau of Maintenance plans to notify all drivers to avoid streets that have a high volume of bike use. Gawthorne said they will try to completely avoid intersections that have bike boxes and he plans to put laminated cards with bike box locations on the dash of all trucks and heavy equipment in the bureau.

Gawthorne’s philosophy is to try and steer clear of bikes whenever possible, and when it’s not, he hopes to raise awareness with other drivers about the importance of communicating with cyclists on the road. Gawthorne said when he comes to an intersection with a bike, “I get eye contact with them, or I stick my head out the window and ask what their intentions are.” 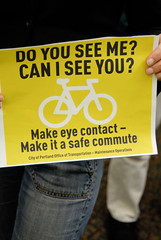 The City’s Bureau of Maintenance is
working to place stickers like these
on the back and side of every
truck in their fleet.

“We think the best way to stop these accidents is by eye or voice contact.”

In addition to working internally at the Bureau of Maintenance, Gawthorne said they plan to attend many bike events over the summer. They’ll offer cyclists a chance to climb aboard street sweepers, trucks and other equipment to see what it’s like from a their perspective.

They’re also working on a new decal that will be placed on the rear (and possibly on the right-side door) of all trucks and equipment in the City’s fleet (see preliminary design at right).

Gawthorne was clearly sincere about doing more to make bike safety a priority in his Bureau, saying that “We want to be the forerunners of all this.”

While it’s great to have the City of Portland’s truckers on board with bike safety, the real test will be getting private trucking companies (like the ones that employed the drivers in the deaths of Tracey Sparling and Brett Jarolimek in October) to do so as well.

Gawthorne hinted that they’re aware of this and that they’re working beyond the City of Portland. He said, “We also have the trucking industry behind us…this is going to snowball, corporations will start adopting these measures too.”

I applaud this. A definite step (no, more of a big jump actually) in the right direction.

Isn\’t the point of the bike box to increase visibility of a cyclist? Avoiding intersections with bike boxes; does this mean that those trucks will now be on lower volume roads, i.e. narrowed and likely to have more visual obstructions, like un-trimmed trees? Seems that will put cyclists more in harms way, not less.

I\’ve never handled a front loader, but I can imagine the noise and complexity of large equipment makes for tough work, especially during in-transit times when they mix with traffic.

The more we understand each other, the better we\’ll all be.

After the first read of this, I thought: wait, they want to avoid bikes…shouldn\’t we learn to use the roads together safely?

But on second thought this is a nice balance. It\’s like a cyclist taking a bike boulevard instead of Powell, only from the big rig\’s perspective.

\”A rolling stone gathers no moss\” immediately came to mind. Keeping the momentum of change in our city will make the streets safer for everyone.

The fact that the industry has realized there is a safety concern and looking for ways to help speaks volumes. One step at a time.

I can see a couple of people in Bike Paradise right now nodding thankfully at Mr. Gawthorne\’s efforts (and his co-workers\’, and the Water Bureau\’s). Thanks from the rest of us riders, too.

I was in attendance and I have to admit I was a little confused by the avoidance of the bike boxes comments.

I think it would be a great step if we could find a way to offer discounted rates for community rides for those that have Commercial Drivers Licenses as a way to encourage those that are in big rigs to recall what it\’s like on a bike. Certainly being on the bridge pedal on the freeways (where the trucks normally are) on a bike would help them appreciate our situation.

a way to encourage those that are in big rigs to recall what it\’s like on a bike.

I think this is a good idea… although, it would be much more realistic to conduct these vehicle exchanges during prime commuting time under normal conditions.

||Bicyclists do ride-alongs in Truck Cabs

||Truck Drivers do ride-alongs with Bicyclists

I like those yellow stickers. It scares the crap out of me when some rider rolls right into the blind spot of a big rig at a red light.

this kind of thing is FANTASTIC.

i think i have mentioned before that for a time while i was living in san francisco, we (the sf bike messenger association) had monthly meetings with the transit workers union (sf municipal transit bus drivers), out of which grew an increased awareness on the part of both groups. these vehicles have HUGE blind spots, way bigger than you think, and eye contact is a huge deal. dialogue like this takes things one step closer to them constantly looking for us, and us realizing that we need to look for them too.

seriously, eye contact and some simple hand communication (and yes, sometimes giving up your right of way if it smooths an interaction for all involved) makes a gigantic difference in my interactions with heavy vehicle operators. i cant even begin to count the number of times drivers have commented positively on this.

go out of your way to put yourself blatantly in their mirrors – youll be surprised how often youll find a face staring back at you.

I think to get all the trucking companies (cement, solid waste, long-haul, towing, beverage delivery, etc) to take bike safety this seriously will require a push from insurers or the state. But a few are showing some interest, and not just the BOM.

Nice to see our brothers and sisters at BoM taking the ball and running with it. The Water Bureau, through our Public Outreach officers, is coordinating a city-wide approach through the larger Bureaus with the majority of the vehicles. Tim Hall is setting up a meeting to see if we can all pool our resources and have the bigger impact. We are already talking about having rigs at community events, neighborhood fairs, etc. to give people the perspective from behind the wheel. Likewise, we are challenging our folks here to do the same from a bike. Look for more in the upcoming months!