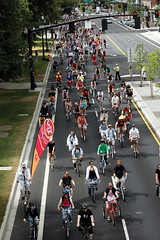 A few days from the start of the National Bike Summit in Washington DC, nationally syndicated columnist Neil Peirce wonders whether 2008 is the Year of the Bicycle.

In his most recent column, slated for national publication Sunday (3/2), Peirce writes that this might be “Bicycling’s best year since the start of the auto age.”

Among a “crescendo of trends and developments” Peirce uses as evidence are the rising price of oil, “bike-for-hire stations” that have taken off in Paris and other European cities (and are on their way to the U.S.), bike boulevards, and a “complete streets” movement that Peirce says “is gaining traction nationwide.”

Also making an appearance in the column is (of course) Portland:

“Portland’s experience shows the potential, Blumenauer insists: Since that city’s bike program began in the 1990s, the “modal split” for bikes has quadrupled and a $100 million bike industry has emerged, accounting for 1,000 jobs.”

Portland also gets a nod along with the buzz-phrase of the Year; bike boulevards:

“Contentious when they were first introduced a decade ago, the Portland bike boulevards have created quality environments, raising nearby home prices significantly. But perhaps most importantly, they’ve marked a major shift from meeting needs of expert and intermediate cyclists. The focus, instead, is on making cycling welcoming for everyone — kids, families and novices included.”

The column is slated for publication on March 2nd, but it’s already been leaked out on the web.

As for the National Bike Summit…stay tuned for lots of coverage. I leave Monday night and I’m spending all next week in DC…

2008 might well be the Year of the Bicycle; it\’s already on its way to becoming the Year of $4 Per Gallon Gas.

Anyway, I\’m glad to see both Blumenauer and Portland stirring up national interest. Anything and everything that lends appeal to bike commuting and/or promotes bike safety gets my whole-hearted support.

It won\’t truly be the \’year of the bicycle\’ until trips by bicycle actually show some bigger increases (outside of Portland of course) and the article acknowledges that. But hopefully that\’s coming.

The PR environment has been great for bike folk this year. Having businesses like Humana and Clear Channel involved in bike sharing certainly aids in getting some press.

Add in the growth and maturation of websites like this one (and our local variant, washcycle.typepad.net), it\’s easier to demonstrate to mainstream media how the bicycle solves so many of our problems, and merits investment.

Jonathan, if you need a bike, a ride guide, or just a place to detox from the Summit for a few hours next week, shoot me an email or pop into our shop.

I think Phil is right. I have seen a more sustained ridership both in PDX and Eugene throughout the winter. Over the last week or so of nice weather I can many commuter noobies peaking out like spring bulbs ready to burst.

If we get a nice spring and combined with the almost certain $4.00/gal, ridership will skyrocket.

Pretty interesting to see from a moderate/conservative columnist like Neil Pierce.