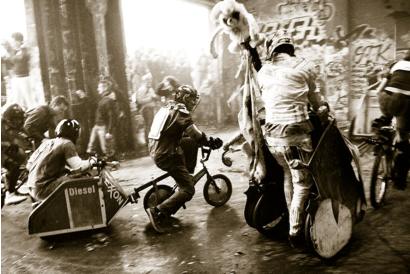 The Ben Hurt Chariot Wars were one of many highlights at Mini Bike Winter V.
(Photos © J. Maus) 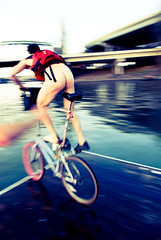 The Cupcake Challenge: ride
your bike into the Willamette
(sans clothing of course).

Crews came from Vancouver (BC), Seattle, Santa Cruz and Australia to take part in what has become a two-wheeled spectacle without equal.

The action started on Friday with the Badass Challenge where competitors do a reverse-Zoobomb (from the Pyle at SW 10th and Oak to the top of The Hill in Washington Park). This is a five mile uphill race, and it’s not for the faint of lung — especially on 16″ wheeled kids bikes!

Scott Nowicki came out on top for the second year in a row, but it was the pedaling prowess of veteran ‘Bomber Solid Gold that wowed the crowd. He became the first rider to ever complete the course on a mini-mini 12″ bike. In Solid Gold’s words, “it’s the type of race that leaves you gasping and puking…pure badassness.”

The other events of Friday night — the Skate Bomb and the Gravity Bike Race — were all about speed. In order to protect the innocent, I won’t publish the top speeds I heard about; but trust me, it was faster than most of us have gone on our regular bikes.

With a reported 250 people up on The Hill, Friday was a great start to Mini Bike Winter V.

Saturday was Medieval Day and the event we’d all been waiting for: Ben Hurt II, the Chariot Wars.

It began with a convivial brunch in North Portland where steeds and gladiators showed off their chariots and came together to fuel up before their battles. 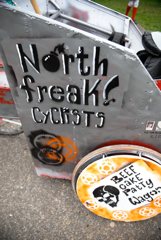 Doc and Thomas’
“Beef Cake Patty Wagon”
was made out of steel,
angle-iron bed rails.

The chariots ranged in quality from a converted shopping cart, to plywood and 2×4 fours, to fully welded and enclosed steel units (complete with protruding saw blades). The excitement grew as team after team assembled; the Pedalphiles, North Freak Cyclists, Laurelwood Dropouts, Team Dethwish, The Dead Babies.

As things got underway at an undisclosed former industrial site on the Willamette River, it was clear this would be an event to remember. This year there were more chariots, more competitors and the battle was one for the ages.

The rules were simple, there were no rules. The object was to survive. The last team standing would take home the coveted Ben Hurt Cup. To win it, you had to endure what must have seemed like an eternity of brutality. Implements of all types (padded of course) were swung, others were used to hook and pull gladiators from their chariots. Meanwhile, roving hordes of malicious spectators dumped oil on competitors, shot Roman Candles, bottle rockets, and smoke bombs and basically made life a living hell for those still mounted on their chariots.

The sheer determination and unrelenting will of the gladiators and their steeds to maintain forward momentum was inspirational to all who witnessed it. Despite seemingly insurmountable odds and the wrath of crazed crowds hell-bent on destruction, the competitors survived, with valor, lap after lap.

In the end, there could only be one champion team, but everyone that did battle deserves high honors and a place among Ben Hurt Chariot War legends.

But even wounds and battle-weary bodies couldn’t stop Saturday night’s party from raging until sunrise.

From all accounts it was a special night. Attendees reveled in the debut of the Zoobomb Cover Band and Chain Reaction (Portland’s new all-male bike dance troupe), and the Mini Bike Winter Fashion Show was a big hit.

But the fun wasn’t over yet: Sunday was the all-important Mini Bike Winter Olympics. 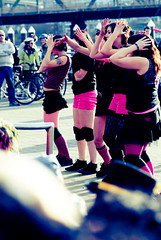 The event took place on the Eastbank Esplanade amid huge crowds of sun-seeking Portlanders. Hundreds of people — spectators and competitors alike — shared in a picture-perfect Portland day.

The contests included bike derbys, a blind race, bike limbo a chicken race (racing on a mini with someone on your back), flatland race, and more. We were also treated to a Sprockettes performance and the traditional Cupcake Challenge, where a few brave souls launched bikes off the boat ramp into the frigid Willamette River just north of the Hawthorne Bridge. 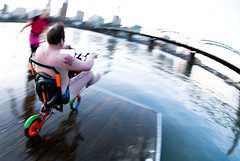 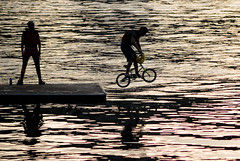 After the Cupcake Challenge, it was time to warm up and then get back up on The Hill for more Zoobomb races and mini-bike shenanigans.

It was by all accounts a mind-blowing weekend (and I didn’t even get to the parties). What I’ll remember most — besides all the fantastic exploits, crazy bikes and people — is how the culture and community around Zoobomb seemed to flourish in all sorts of new and exciting directions right before my eyes.

I’m still uploading photos, but here are the galleries I’ve published so far:

I don\’t have a single spot on my body that isn\’t in pain.

I don\’t have a single spot on my body that isn\’t in pain.

Then you must hanve had fun!

Thanks Zoobombers! I had a blast hanging with you all this weekend. The level of sportsmanship was outstanding in spite of all the doping.

this weekend was incredible. It was awesome to have all of our bike friends from around the world(!) come and experience our fun. Thanks to everyone that came out. You all made it a spectacular event.

Well that didn\’t work.(see above)

I think I recognize the \”undisclosed industrial location\”…go to npGreenway.org to learn more about the community\’s efforts to extend the esplanade all the way to St Johns!
We need to bring some of this great energy to the various Greenway Trail meetings, hearings, committees which can easily be dominated by old guys who import cement and don\’t want no damn bikes along the river.

This was totally so much fun – I\’m really looking forward to next year!

Next year, I\’m going to have a chariot and improved armor…

Thanks again Portland! Every time I come to your city I fall in love with it more.

I think the river made me sick.. or perhaps it was the minimal sleep since NAHBS.. but either way it was worth it!

we have more pictures of Mini Bike Winter wonder:

As a finale to the weekend, we had a biker wedding of two wonderful Canadians at Cannon Beach:
http://www.flickr.com/photos/butterbits/sets/72157603948678651/

astounding. my concern is that I still have yet to feel some of the parts I typically use to live.

BTW, I need pictures from the fashion show! there were lots of cameras, share with me!!