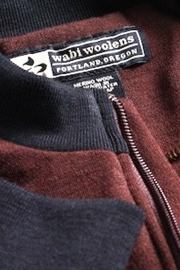 Now, the 42 year-old middle school teacher from Southeast Portland has turned that love into a new business. A few weeks ago, he launched Wabi Woolens.

Huffman says the company sprung from his dissatisfaction with existing wool jerseys on the market. “Around the mid-to-late ’90s, all the companies switched to a super-soft, machine washable wool,” he said “I didn’t like it because it was thin, it pilled too easily, and it just didn’t feel substantial enough to me.”

So, in true entrepreneurial spirit, Huffman decided to do it himself.

Harth Huffman in one of his
Wabi Woolens jerseys.
(Photo: Wabi Woolens)

“I had way more to learn than I anticipated,” he says, thinking back. But after five years of experimentation, testing, and fabric research, he finally has a finished product to share; and it’s produced almost entirely in Portland.

The wool for his jerseys comes from New Zealand (where else?), and is made into fabric in New York, but the rest of the process — which includes designing, knitting, packaging, and selling — happens here in Portland.

Huffman says Portland’s proximity to large apparel makers like Nike and Adidas has been key. “That’s the beauty of doing this in Portland. These big companies do a lot of small batch, local production for some of their high-end clients…things like Olympic Team uniforms and other special projects.”

“These are designed as a piece of equipment, not as something you have to baby.”
–Harth Huffman, founder of Wabi Woolens.

As for “Wabi”, Huffman told me it’s from a Japanese term that describes things that are natural, simple, rustic. “A good example of wabi” he says, “Would be like deciduous trees in winter. They may have no leaves or flowers, but there’s still something inherently beautiful about them.”

What’s so beautiful about a Wabi Woolens jersey? A lot, according to a few folks who have raved about them to me.

Huffman says a few highlights are; reinforced stitching, elastic reinforcements at the shoulders, rear pockets that are designed to not sag when filled, and an interlocking knit that prevents runs if the fabric gets cut.

Huffman says the jerseys (which sell for around $140) will be sold direct through his website as much as possible but they’re currently available at Sellwood Cycle Repair (7639 SE Milwaukie) and at The Vanilla Workshop (the retail space inside Vanilla Bicycles, 717 SE 35th).

Saw these in the Vanilla booth at the show this weekend. Quality was obvious. I wish Mr. Huffman good fortune in this venture. Would sure look good with a Deller cap! Buy local.

Is wool very hard to clean?

SH,
Harth said that his jerseys are machine washable.

Now add in some reflective Lumatwill and you are totally set.
See:
http://www.dashingtweeds.co.uk/

SH and Jonathan,
I want to point out that this wool is not treated to be machine washable. Detailed instructions are on the website but the short version is:
soak in warm water with detergent
rinse gently
dry flat
easy
Thanks for the positive response.
Harth

Is there anyone who knows of a good quality pair of wool pants that aren\’t too thick but are also relatively durable. I have been wearing the ass out on a pair of Carharts every 6 months. I figured the wool lovers or Harth could provide some clues. Thanks!

I think I\’ll buy one of these jerseys once my winter biking shirts start to wear out.

Although I like the idea of nice wool pants, the wear on the ass from biking is enough that I\’ll probably stick to second-hand/army surplus to avoid buying a new pair of nice pants every year. I currently have a pair of army surplus wool pants that I have cut into shorts that are perfect over long underwear.

I would like to know if the wool comes from sheep who have had the skin over their tails cut out (\”mulesing\”) or if they are later shipped to the Middle East for slaughter before I consider purchasing one of these.

Oh and \”buy local\” and \”don\’t burn petrofuel\”? The raw materials have come to PDX via NYC and New Zealand…

While they are all very nice, the newer versions actually hold up better, deal with the odors of riding and sweating better. It does show more wear, but mainly because it gets worn more. Smart wool is where it is at. And I do not have many of the above mentioned problems with piling up, but probably because I baby them when cleaning.

This is coming from someone (me) who used to birth sheep each spring before going to school in the morning. The smell of the lanolin tends to stick with you most of the day at school by the way. Not attractive. Everyone knew what you did in the morning. Thin of the line of jokes involved in that.

They are also machine washable, but I only do it in the newer machines, which have a larger variety of settings, and I use the lightest cycle.

Of course I dry them flat on a towel.

Giordana used to make sweet wool cycling pants, with leg zippers, and a reinforced rear end. I could not get enough of them, and cannot find them anymore. I have ibex knickers, but only wear them with a strong (carhart) layer over the top, so as not to ruin the butt layer.

I dunno – as someone who for 9 or so months out of the year wears some form of wool or another while riding, I am awfully fond of my thin, super-soft, machine washable (and tumble dry-able!), all weather wool jerseys. When it gets cold, I just start adding base layers . . .

plus $140 is more than I am willing to spend on a jersey (and believe me, I am hardly tight with my $ when it comes to bike gear)

How about high-visibility colors? Wearing earth tones in US traffic is just dumber than dog shit; it can sometimes feel like a bike-assisted suicide attempt. Wear neon–live longer.

And, like many cycling clothing providers out there, women\’s sizes seem to be missing…

I wear my Smart Wool jersey biking, paddling, skiing, snowshoeing, and volunteering at outdoor events. I wash it with a regular load in cold water, I dry it in the dryer, and I put it on again. It doesn\’t ever small funny, it has never pilled, and it was only $90. Harth, I would possibly spend $140 on a jersey, but not if it doesn\’t beat Smart Wool for my needs. What\’s more, my jersey is so durable, I haven\’t needed to buy another one.

One other thing: It was designed for a girl, so it\’s SEXY too!

I\’m telling you this for your market research. I love wearing regular wool at work, but you\’d really have to give me a good reason to wear it when I sweat.

Neon makes me want to kill myself. I find the flashing light workd better.

Wow, this has generated a lot of energy. I am simply trying to make the best possible wool cycling jersey I can make, and do it in Portland. I hope some other people like them. I make no claims to be the best jersey, and I make no claims to be more or less \”green\” than anything, for the exact reason that leftcoaster states. However, I do believe the \”buy local\” tag is somewhat legitimate, as most -but not all- wool clothing these days is from China. I guess it is all relative. I like Smartwool, I really do. We have a lot of it around our house. However, they don\’t make a cycling jersey (with pockets and a big zipper, etc) and they switched almost all of their manufacturing to China. I won\’t buy them anymore because of that. It is merely a personal choice, not right or wrong.

I just received my women\’s samples, so if you want one, let me know. If these few sell and I get good feedback, I will make plenty more.

As for \”mulesing,\” this is a serious issue. PETA has informed me that almost all mulesing has been eliminated from New Zealand, where my yarn is sourced. I tried to source US wool but this quality is not available domestically. There is an endless amount to research and learn and I just want people to know that I intend to keep improving my standards, until eventually I know my wool sources exactly.
As for the pricetag, I know it is high. My sewing and fabric costs alone are enough to buy a Smartwool shirt. My competition\’s prices put me on the higher end but far from the highest. I can\’t make them less expensive without cutting quality or going out of business, and I prefer to do neither.
Andrew, I have a pile of Levis with holes in the butt and it drives me crazy, too. However, I don\’t know of a good source for wool pants that will prevent this. Maybe some day…

Maybe some kind of leather reinforcement where bike seats come in contact with the buttocks, like an external chamois, would slow or stop the worn out seat of bike shorts? Oh yes, make that reinforcement patch go across the glutes for us \’bent riders, too. I\’m getting tired of replaceing worn out bike shorts as much as the other guy.

Remember also when talking about cost, that the large manufacturers outsource a lot of their costs – the true cost of an item is going to be higher than what you pay for it in nearly every case. I don\’t know enough about the details of Harth\’s operation to comment specifically, but any time volume is low, the manufacturer makes an effort to source responsibly and everyone in the chain of production and distribution gets a living wage, the cost to the end user is high. Usually the quality, and the relationship is worth it.

I asked myself that question a couple years ago, and I know my answer – I would rather deal with real human beings whenever possible, and local vendors when I can. When you establish a relationship with a person rather than a company, you have community, you have dialogue, and you have influence. I think that aspect has been largely lost in today\’s corporate-dominated low-cost convenient world.

Sometimes efficiency and convenience just plain sucks. You get what you pay for – in time as well as money.

I\’m no veggie/vegan, but does the wool come from non-brutalized sheepies?

As a former native Oregonian sheepie-grower, I would actually prefer the wool to have been produced locally… although that might be tough, since the US wool market bottomed out when Australia and NZ killed it with their bottom-of-the-market shepherding practices.

What kind of wool (sheep breed) do they use anyway? I\’m guessing its not Merino.

#20 from reading other articles about this the wool is from RSPCA approved sources in NZ. Can\’t verify it though.

Do you need a woman to field test the women\’s jersey? I hear the weather is supposed to turn nasty again this week.

Hi Wilsonville9,
Thanks, but I have a live-in field tester who gives me daily updates and analysis whether I want them or not. 🙂

A sometime reader of this site i have to say I lately took to wool. It started with socks… now to Jerseys.

I have found my local shop stocks Wabi Wool and the quality seems topnotch. I had the owner put one aside for me til I find the $. When I saw the price I said yeh, right, no one will buy those — but soon they began disappearign off the rack. And that is probably the biggest compliment you can give a new company.