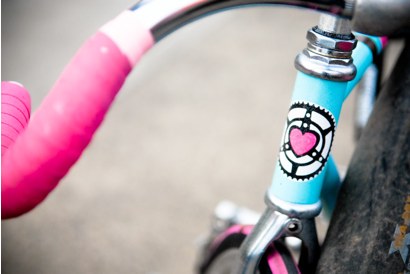 It’s a special day on Portland’s bikeways, a day when our love of bikes doesn’t seem out of place…it’s Velotine’s Day!

Here are a few ways to get into the mood:

This evening, on the east side of the Hawthorne Bridge, all two-wheeled commuters are invited to Mocktails on the Bridge. The annual event has been put together by those bike-loving folks at Shift. In addition to fun and fruity drinks to share, they’ve even made some crafty Velotines greetings to brighten your day. 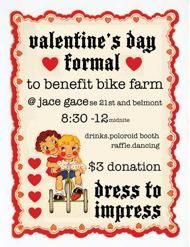 A benefit party for Bike Farm

And a bit later tonight, once your bikey-buzz is going strong, you should swing by the Valentine’s Day Formal. This event is a benefit for the upstart non-profit bike co-op, The Bike Farm and the party plans include a Polaroid photo booth, drinks, dancing, and raffle. Dress to impress!

Want to know more? Check out BikeSmut.com, or watch this little video teaser/trailer put together by RevPhil’s sometimes cohort Dan Kaufman (of CrankMyChain).

If at all possible please dont drive today
instead jump on your bike and show some love.

Show your bike some TLC with some bike wash and chain lube!

WD40 this time of year that all the love my bike gets, make sure its safe if i need to sprint away from a 3ton beast.

WD40 on your bike may not be such a great idea.
see here

i still use it, thanks 🙂 other good lubes also

If i wasnt married i would spary myself with wd40 and ride all over portland looking for love.. hehe LOL

I would also not lube my body with WD40.

Oh God! Jace Jace does THE best waffles on the planet! Waffles and bikes. I\’m in heaven.

Ripped fresh from the PUMA website: \”Valentines is a bitch. So take your bike on a date (and by \”date\” I mean race). Chas, Adam, and Will present a day of love race starting at 3828 NE Vancouver at 7pm on Feb. 14th. It will cost $10 which includes a t-shirt with an after party to follow. You provide your own crippling loneliness and general disillusionment, 10-4?.\”

Hey, I got a fold-out Portland By Cycle map on my way over Hawthorne tonight. Thanks, Shift! Nice job. I guess it does pay to leave work at a reasonable hour.

Lame fishermen in Wyoming used to spray worms with WD40, it attracts the fish like crazy. Of course they had to hide from the game wardens. Personally I use artificial lures or flies.

They are both entirely the wrong way to go about it.

I love to perform biking with my kids and wife. It\’s always a good opportunity to share wonderful moments with the family and not to be all sitted like larves in front of TV. Cold or sunny, we never miss an opportunity to share these activities. Even more on Valentine\’s day!