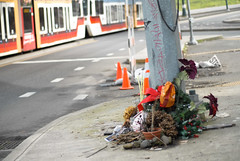 The memorial, which was chained to a traffic pole on N. Interstate Ave. just north of Greeley, was not only a tragic reminder of Brett’s life and the community’s loss, but it served as a remembrance of Brett for his friends and the many commuters who pass by this location daily.

It was stolen sometime on Tuesday night. Word of its disappearance first came in the form of a comment from one of Brett’s friends, Corey Omey. The news was also posted on the mailing list of the Oregon Bicycle Racing Association (OBRA). 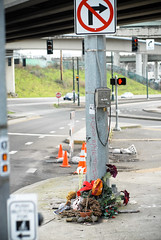 After visiting the scene myself to confirm the bike was missing, I tracked down Mike Mason of ODOT. I worked with Mason when I covered ODOT’s decision to remove the stencil of Brett at the same location. After making a few phone calls to his work crews, Mason was able to confirm that ODOT had nothing to do with the removal of the bike.

Since jurisdiction over these things can get very complicated, and since the bike was attached to a traffic pole, I then called PDOT’s Bureau of Maintenance to find out if they were responsible. I got in touch with Tim Thrienen, the supervisor of PDOT’s street cleaning and emergency clean-up division. Thrienen was well aware of the significance of this memorial and called around to investigate. He even sent out a truck to view the scene.

After our conversation, Thrienen called me back and confirmed that no one at PDOT had removed the bike.

I also talked to Carl Larson, the man responsible for erecting Brett’s ghost bike just after midnight on that sad October night. Carl said the bike was locked with an inexpensive chain that could have been easily cut.

All this leads me to believe that the bike was most likely taken by a thief to sell for metal scrap. Metal theft, which is often tied to the the meth epidemic, is a growing problem in Portland.

But it’s worth noting that a metal sculpture, created by Matt Cartwright and placed at the site in Brett’s honor, remains.

So far, I haven’t heard of any plans to replace Brett’s ghost bike. If anyone does, perhaps a higher quality chain should be used.

Maybe, given the current value of scrap metal on the international market, we could consider a jigsawed plywood white bike conversion.

A plywood ghost bike would be pretty cool. I\’ve got a sheet of marine plywood in my garage that would last for years under that overpass.

Since that day, thousands of road users passed that bike. I\’m confident that it gave many of them pause. The bike provided a focal point for our mourning. It gave the media a potent image. It was a rallying point for at least 4 group rides and the backdrop for an ever-changing collection of candles, photos, and trinkets placed in memorial.

As for who took it–I have no idea, but whoever they are, they had some level of respect for the dead. It would’ve been impossible to remove that bike without disturbing the old bouquets and garlands and candles that were nested all around its front wheel. This afternoon, those things were still intact and relatively neat, not strewn around as they’d be if someone hadn’t taken the care to rearrange them after removing the bike. If people really wanted some scrap metal, they would’ve taken Matt Cartwright’s metal sculpture, u-locked to some signage within spitting distance of the Ghost Bike site. It’s a mystery.

The Ghost Bike could\’ve stayed up longer. I agree. For many of us, though, it had started to blend into the landscape — to lose its meaning. I doubt we\’ll forget Brett, but I also doubt I\’m the only one on whom the impact of that bike was waning. Streetscapes change all the time in a constant give and take. This bike was no exception to that rule.

That intersection will always hold significance for me, regardless of the presence or absence of a white bicycle.

It’s unlikely that it was stolen for the metal, non-ferrous and exotic metals are worth the effort: mixed steel is not worth much at all. Most likely just some kids out having fun.

I work in that area and when I was biking there this morning, I found some of the memoirs that had been hanging on the bike. They were flung into the grass on the other side of the street, which is by the way, across the Max tracks. So I\’m not sure I agree that there was respect for the dead in the removal of the bike. I don\’t think I\’ve ever heard of anyone removing a memorial to a person who died on a car… why is it ok to remove a memorial for a bicyclist?

So it sounds like the memorial WAS scattered about in the bike-removal. Sad.

Here\’s the story of the origin of Brett\’s ghost bike. I originally bought \”Chain Girl\” from Matt Cartwright back around the year 2000. It was made from reclaimed logging chain and an old school kid\’s bike. I moved to a place where I didnt have enough room for her so I asked my friend Charles if he\’d like to take care of her for a while. He ended up moving and asked his friend Elizabeth if she\’d keep her a while. That must be when she was given to Brett\’s memorial. a worthy cause no doubt.
Her bike wasnt very nice, and Chain Girl\’s body was made from nasty, rusty steel chain, so she wasnt worth anything in scrap. She originally was pretty expensive and attractive to my mind\’s eye, so Im sure somebody stole her as a prank or for her artistic value. I hope she is found and returned, but cant say I was surprised she got taken. A cool structure to be left out in public not permanently attached. If she is returned, maybe some kind of permanent installation could be done…….

It has lost no meaning, I ride Interstate regularly and every time I get to legacy I get an awful feeling of retracing Bret\’s last moments. I rode the intersection today and the same feeling is still there. Just knowing what happened at that intersection means personally I\’ll never forget. I never knew Bret, but it hit pretty hard and very close to home. I don’t think I’ll ever come down the hill from legacy without those thoughts.

I rode by it this afternoon (one-ish maybe?) and everything was gathered neatly but sans bike. I thought it strange that ODOT, or whomever usually cleans up in due time, took the bike but left the rest. I doubt that metal thieves took it because the kick ass sculpture was still there.

Maybe somebody thought that a more fitting memorial would be to revive that old ghost bike into a once again working bike, it having served a stretch of time as a memorial to one so sadly departed. Optimistic, probably unlikely, but you never know.

People are desperate. Tonight, I was standing outside the Goodwill Store on SW 10, looking in at the stuff on the inside through the windows of a secondary door. Another guy back away from me was also looking through the window over my shoulder. He say a bedraggled guy inside the store ripping price tags off items and jamming the stuff into his coat. He went in and told the clerk about the guy, but since she didn\’t personally see it….end of story. But, there\’s a number of different philosophical ways to look at these kinds of situations.

According to one of my contacts at a local TV station, the ghost bike has been returned. He said, “Apparently it’s got a note taped to it apologizing, saying he didn’t realize how important it was to people.” I’ll try and get a photo as soon as I can.

Yeah, I drove by there this evening around 5:30 and there was a white bike there. I can\’t confirm it\’s the original, but it\’s there.

Only in Portland would a thief return the goods and leave a note apologizing, right? I didn\’t know Brett, but I have to think he would chuckle. I\’m really glad it\’s back. And thank you Carl Larson for your work!

We need to make the roads safer, for Brett.

Corey Just called me with the news of the returned bike and read me the full text of the note:

\”I sincerely apologize for what I have done- I did not realize what it was until after the fact. I know that there is a war between pedestrians/ bicyclists and automobiles, and what I did constitutes high treason, and for this I am truly sorry. I return this bike, along with one of my most cherished possessions in respect to your memorial, and a s a guarantee that your efforts have impacted at least one life; mine – Bradford (The one who stole this bike)\”

The bike now sports a blue bandana that I don\’t think was there before.

wow. that is amazing. Thank you Bradford.

This warms the heart. Glad it made it\’s way back.

It\’s good to know he will only steal things that don\’t have any meaning to people — hopefully he\’ll move on and rid us of all the stuff we don\’t care about.

Maybe the world is a decent place after all.

We need to find this \”Bradford\”, thank him for returning what he took, knowing that returning it was a noble and brave, but of course right thing to do. Then, the next thing we need to do as a community is reach out and get him a bike! I did not know Brett personally, just raced against him, but it seems like maybe Bradford just wanted to be like Brett and the rest of us and ride a bike. Why not make a statement and show what kind of people we are?

How long do ghost bikes stay in place for? Who decides when it\’s been long enough?